The Sea Rescue craft Spirit of the Vines and IL Battello were launched and our NSRI rescue vehicle, NSRI rescue swimmers and CMR (Cape Medical Response) responded to the scene.

On arrival on the scene a search commenced for 2 men on sail boards and another 2 men who had reportedly swum out to assist these 2 sail boarders.

While searching we found that all 4 men had come ashore at different points in the vicinity along the coastline and they were not injured and they required no further assistance.

Reports of an additional man (a 5th person) suspected to still be missing at sea during this operation were found to be a false alarm with good intentions. Our sea rescue craft engaged in the search and rescue operation continued to search for this person who was suspected to still be missing until it was absolutely confirmed that no more people were missing and all persons were accounted for and safe.

Then at 16h44 reports of a 60 year old German man, believed to be living in Camps Bay, being swept out to sea on a sail board at Inner-Komm, off-shore of the Slangkop Lighthouse, were received from the Transnet National Ports Authority (TNPA).

Sea Rescue craft engaged in the earlier search off Scarborough were diverted to the scene and during the search the man abandoned his sail and then stood up on his sail board making it easier for the search and rescue teams to spot him in the 4 meter swells.    We spotted him immediately once he stood up, almost 1 nautical mile off-shore of Slangkop Lighthouse, and he was rescued onto the sea rescue craft and brought to shore safely and he required no further assistance.    His sail and sail board were recovered.

Sea Rescue craft were launched and our NSRI rescue swimmers responded to the scene and during an extensive search operation the man was found safe on the beach after he had managed to swim to shore.

The man was not injured and he required no further assistance. 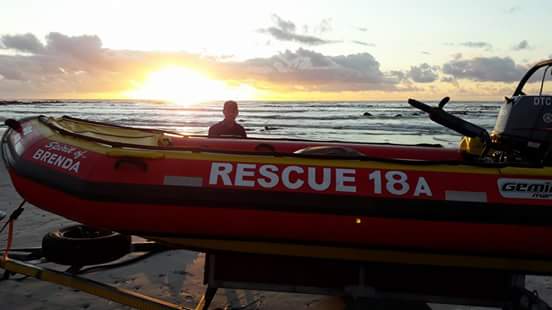