At 20h05 on Tuesday the 22nd of April, NSRI Port Elizabeth volunteer sea rescue duty crew were activated following reports from the Bid Freight Port Operations of a worker fallen, injured and trapped in a cargo hold, onboard the NICOLAAS L at a berthing in the Port of port Elizabeth.

The worker, a 44 year old Port Elizabeth man, was standing on a ladder inside the hold while cleaning the hold (which is due to be filled with fertiliser) when the ladder gave way causing the man to plunge 25 meters to the bottom.

On arrival on-scene NSRI set up a technical rescue rope system to reach the patient 25 meters below in the bottom of the hold.

On their arrival on-scene Fire and Rescue services took over coordination of the technical rescue operation and paramedics and rescue crews were lowered down to the patient (using the technical rope access system made more difficult by there not being a high point above the hold to use as an anchor for the ropes).

The patient, suffering a pelvic injury and lower back injury, was stabilised by paramedics and secured into a Stokes basket stretcher and lifted out of the hold and then lowered over the side of the ship to the quay side and loaded into a waiting ambulance and transported to hospital in a stable condition for further treatment.

The patient is expected to make a full recovery. The rescue operation was completed by 22h30. 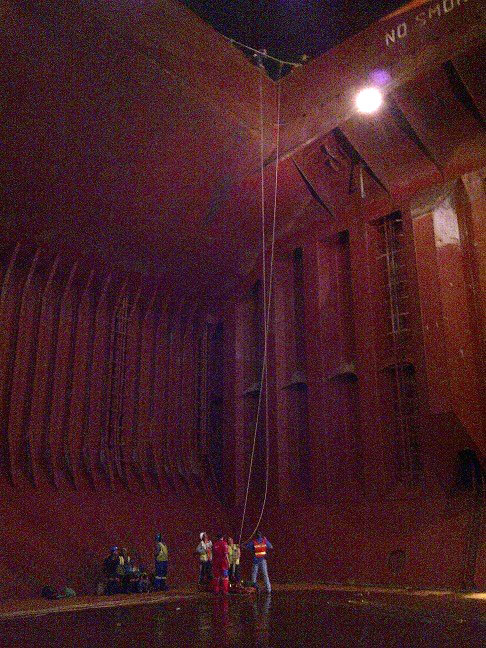