Station 20 has had a busy few weeks with visits from Head Office, new signage on the seaward side of the rescue base, new jumpsuits, serious storm damage to the launch ramp at the harbour and intensive training provided by Station 5, Durban.

During the month we have had visits from Mark Hughes (Ops Director) who met with the Management Committee of the base to share his vision on leadership and training.  Cleeve (our new CEO) then visited the base with Meriel Bartlett (Director) and Eddie Noyons (Ops Board Member) and saw first-hand the damage caused by rough seas and spring tides to the launch ramp at the Sonny Evans Small Craft Harbour.

This harbour is home to not only Sea Rescue but also commercial fishing boats, charter fishing boats, dive operators and private ski-boat owners. It is one of the busiest small craft harbours on the coast and the damage impacts directly on the livelihoods or all those using it as well as the NSRI station’s operational capability. In the last financial year this particular rescue base assisted more people than any of the other 33 stations around the country – a total of 81.

On the same weekend the duty crew put up new Sea Rescue signage on the seaward side of the base. The old signage having finally succumbed to the ravages of time, wind, weather and sea air.

Over the same period the crew reacted to a number of calls from locals who had seen what they believed were distress flares at sea. All the calls turned out to be Chinese Lanterns. 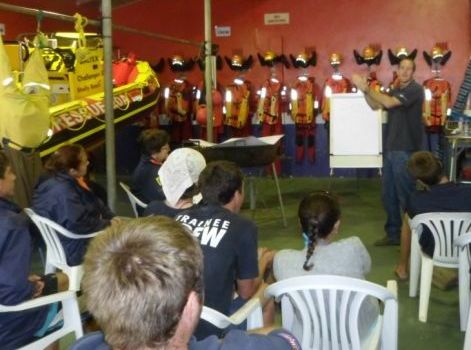 Brett Ayres with the training crew