Quick-thinking by City of Cape Town Law Enforcement Officers and courageous members of the public played a pivotal role in rescuing the crew of a boat that had capsized at the breaker line off Kommetjie yesterday, 18 November 2012.

On Sunday morning, City Law Enforcement Officers who were posted at the Kommetjie slipway received a radio call that a boat had capsized off Kommetjie. They responded immediately and saw three crew members drifting away from their upturned boat in the surf zone, obviously in distress.

One member of the crew was trapped under the vessel when it capsized, but had been pulled to safety by the skipper of the vessel. All three crew members (wearing life jackets) were then floating in the surf zone close to their upturned vessel.

A City Law Enforcement Officer notified the control room of the situation and requested the necessary medical assistance. The National Sea Rescue Institute (NSRI) was also called to the scene.

Four officers of the City’s Marine Unit and a member of the public then began swimming out to the crew members. A man who had been diving for rock lobster close by also provided assistance. The three crew members were pulled back to the shore and, once on the rocks, were assisted by a SANParks Honorary Ranger and an NSRI member who had arrived at the scene. Two of the crew members were visibly in shock and suffering from hypothermia.

Two officers of the Marine Unit, assisted by a member of the public on a kayak, then rowed back out to the vessel. They managed to pull in the crayfish nets and use the ropes to turn the vessel so that it was at a right angle to the swell. They then righted the vessel using their body weight and the momentum of the swell. They bailed water from the vessel and started preparing it for recovery. The NSRI boat and crew then launched their vessel and recovered the stricken vessel from the thick kelp with the assistance of the Marine Unit.

Note to editors: Photos of the rescue operation are available on request to media@capetown.gov.za 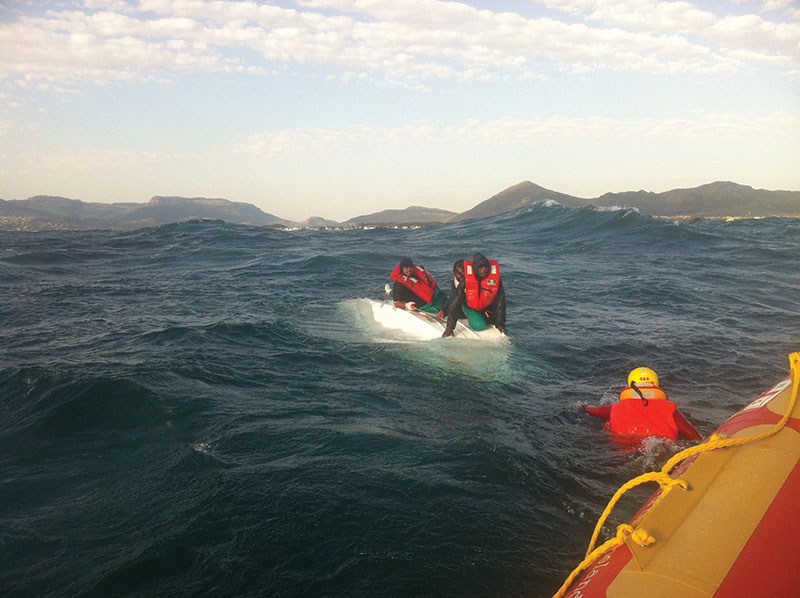