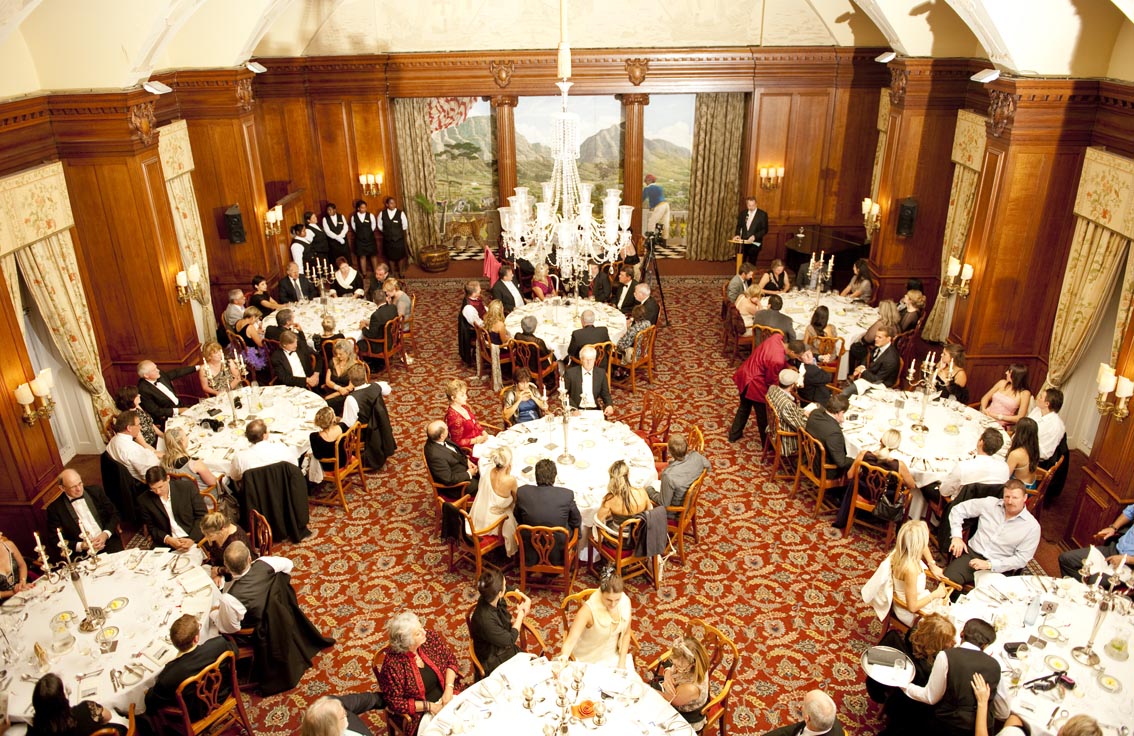 An enormous thank you to the team from Spill.co.za  and 567 Cape Talk  who conceptualized and executed an amazing eight course dinner inspired by the final 11 course dinner served in 1st class aboard the Titanic 100 years ago.

The tickets sold out 40 minutes after John Maytham started talking about the event on his Cape Talk show – what a reflection on Cape Talk that is! NSRI is also grateful to the Mount Nelson for providing the entire evening at cost. And of course the Mount Nelson’s Executive Chef Rudi Liebenberg and his team for making the event so memorable.

After the event we got many notes from those who attended – here are two. The first is from Sea Rescue’s Alison Smith and the second from Stuart Johnston.

Last night I had the privilege of representing Sea Rescue, together with Ian Wienburg our CEO; at a function at the Mount Nelson Hotel to commemorate the 100th anniversary of the sinking of the Titanic.

The idea was the brainchild of Clare and Eamon of Spill.co.za and they together with John Maytham and the 567 Cape Talk team, decided that this should also be a fundraiser for Sea Rescue.

Chef Rudi Liebenberg of the Mount Nelson Hotel and his brigade prepared a magnificent eight course dinner paired with superb wines.  We started with a selection of Hors D’oeuvres and oysters served with sparkling wine and a selection of cocktails around the fountain.  We then moved through to Garden Room which has a high domed ceiling adorned with friezes and were welcomed there by the Cadillac String Quarter.

I met such interesting people one of whom was Keith Calder who donated a bronze, The Dancer, which was sold via a silent auction on the evening.  The commercial value of the statuette is R45,000 and the lucky successful bidder sealed the deal for R26,500 which will go towards purchasing 2 floating stretchers for Sea Rescue.

John Maytham took us on an emotional roller coaster throughout the evening, relaying the stories of the Titanic, some of her survivors and those that went down with the ship with such emotion and respect.  The story of the two little boys, aged 3 & 5, whose father put them on a lifeboat so that they could continue on to a better life in America.  The story of the young Swedish girl who could never understand why she had survived when so many wealthy people had died.  The story of the wealthy American woman who gave her seat in the lifeboat to her maid servant and chose to stay on board with her husband; and the story of the 7 or 8 survivors who, suffering such guilt at having lived, committed suicide in the ensuing years.  It was a fantastic tribute to the memory of those that lost their lives, and those that survived.

Given the multitude of people involved in making such a success of the RMS Titanic 100th Anniversary Dinner at the Mount Nelson Hotel on Saturday, I am not sure where best to direct our thanks.  My wife, Margie, and I had a splendid evening enjoying superb food and wine, in the fitting surroundings of ‘Nellie’s’ Garden Room, entertained by you with a choice selection of readings from eye witness accounts of the tragedy itself and all in aid of a worthy and appropriate charity, the NSRI.  We feel the need to thank someone for all the effort that went into the evening and hope that you will be able to redirect this email to whomsoever you think should receive our grateful thanks and appreciation.

The evening was made even more enjoyable by the convivial company we had at our table; a random group of guests who did not know each other prior to last Saturday.  Our dinner conversation was much like that of passengers getting to know their fellow diners on the first nights of a sea cruise.  It turned out a few of us had much more in common than just an interest in supporting the NSRI and commemorating a ‘Titanic last supper.’

Lorna from Klapmuts and I were borders at the Hill School, Eldoret in Kenya in the late 1950s.  We did not know each other then as we were separated by gender and 3 years in age – both huge gulfs when one is at primary school – but we shared so many common memories, names, places and experiences.  Denise from Kommetjie was a child in Mombasa at the same time as I was in the late 1940s and then lived in Limuru, not far from Eldoret while Lorna and I were at Hill School.  We had much in common to reminisce about and our frequent mention of Mombasa sparked a link with yet another Margie at the table who is about to move to that part of Kenya with her husband, to work on a mining project there.  Africa is just a small village really!

Asante sana!  Thank you to 567 Cape Talk, and everyone else involved for bringing us together on such a memorable evening.  Will you let us know in due course what the final benefit was to the NSRI?