At 16h00 on Thursday 19th, NSRI Mykonos crew were activated by  SAP Elandsbay following reports of 2 fishermen lost and adrift at sea after experiencing engine failure on their small fishing boat (crayfish bakkie).

NSRI Mykonos crew towed their sea rescue craft to Elands Bay which was launched and a search commenced. Police joined in the search.

Cell-phone contact was maintained with the two Elands Bay fishermen but as darkness had already set the two men had no idea where they were nor if they were North or South of Elands Bay and uncertain of in which direction they were drifting.

A search continued until 3 a.m. (Friday, 20th April) when NSRI craft was withdrawn from the water to refuel and to refresh crew and the search commenced again once light (Friday, 20th April) and two Police boats and an SA Air Force 35 Squadron Dakota aircraft joined NSRI’s rescue craft in a search.

By midday today thick fog engulfed the search area and the SA Airforce 35 Squadron Aircraft withdrew from the search.

A search South of Elands Bay had been exhausted with no sign of the two fishermen who at last
communications thought they could see St Helena Bay harbour but the search has now concentrated North of Elands Bay by late afternoon as it is suspected that they had drifted far North and may be seeing land further North of Elands Bay.

NSRI Mykonos recovered their sea rescue craft to be refueled late on Friday afternoon and the search, including a rotation of sea rescue volunteer crew, was due to relaunch from Lamberts Bay tonight to continue the ongoing search.

An SA Air Force 35 squadron dakota aircraft remained on stand-by to join in the search once the fog lifted and MRCC (The Maritime Rescue Coordination Centre) were assisting with search
patterns.

Both men reported that they were safe onboard their vessel but drifting.

At 17h40 the 3 men (originally rescuers were told there were only two onboard) are reported to have been found at Doring Baai after drifting into shallower water and reportedly managing to row ashore. Police are en route to rendezvous with the men and to confirm that they are in as good health as they report to be.

All 3 men will be transported to hospital for a check-up. 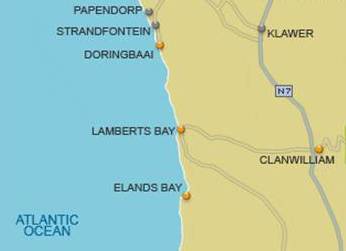