“It appears that the boat had been pulling a waterskier and during a tight turn a 34 year old local man had fallen out of the boat and had disappeared under water.

“Our NSRI Port Elizabeth crew towed a sea rescue boat to the scene which was launched on arrival on-scene (the Sea Rescue boat had been diverted from the Blue Water Bay incident that was going on at the same time) and the SA Police Force, a Police Dive Unit and Coastal Rescue responded.

“An extensive search from our Sea Rescue craft and Coastal Rescue rescue swimmers free diving and a Police Dive Unit scuba diving has revealed no sign of the missing man.

“A Police dive unit will continue a search and the Police have opened an inquest docket.”

The body of a 35 year old  Lesley Vermaak of Port Elizabeth has been recovered from the Sunday River by Police Divers and handed into the care of the Forensic Pathology Services.

The boat and those onboard were apparently not pulling a water-skier but were reportedly in a tight turn on the water when Mr. Vermaak reportedly fell out of the boat and disappeared. 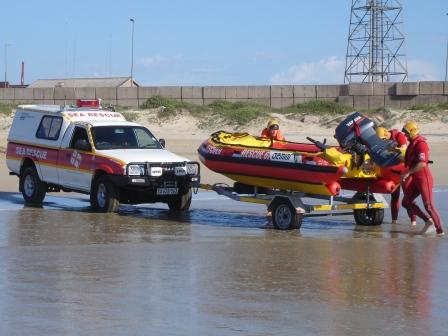