At 12h20 NSRI Agulhas and NSRI Witsand volunteer duty crews were called out after a request for assistance from two paddlers reporting to have capsized and drifting at sea clinging onto their double sea kayak between Arniston and Cape Infanta.

The men phoned using a cellphone saying they had capsized their double sea kayak and were unable to get back onboard and were both clinging to the upturned hull of their craft and drifting, with life-jackets on, and the only reference they could give us was that they could see a mast tower which we ascertained must be the local Test Range tower. In 3 to 3.5 meter rough sea swells and a 20 to 30 knot South Westerly wind, our responding sea rescue resources feared that they may end up being battered against rocks with the onshore winds prior to us arriving on-scene.

NSRI Witsand and NSRI Agulhas volunteer sea rescue duty crews launched sea rescue craft from both sea rescue stations and the Overberg Fire and Rescue helicopter, a Squirrel B2, carrying NSRI rescue swimmers also responded. NSRI Witsand, being closer to where we suspected the men to be, were activated as the primary rescue craft to join the helicopter searching for the men and NSRI Agulhas were activated as a back up to the search and rescue operation. Following a search, from the helicopter, the two men were located near to Koppie Alleen, approximately 5 nautical miles from Cape Infanta, steadily being swept towards rocks on-shore and both men were in the water clinging onto their paddle craft. The Witsand sea rescue boat QUEENIE PAYNE, already nearby to the scene at the time, was guided to the mens location by the helicopter.

NSRI rescuers then managed to right the capsized craft and drain her of water before recovering the craft onto QUEENIE PAYNE and both men were brought to the NSRI Witsand sea rescue station where they received treatment for hypothermia and exhaustion.

The two casualties, Capetonian actor Andre Roothman, 57, from Newlands, and Uys Winterbagh, 34, from Oranjezicht, had departed from the De Hoop Nature Reserve and were headed towards Cape Infanta when their craft capsized in the big sea conditions and they were unable to get back into it. They hung on and drifted with their craft while raising the alarm using their cellphone. They have been reunited with their relieved family members on holiday in the area. They had been capsized and in the water for around two hours. 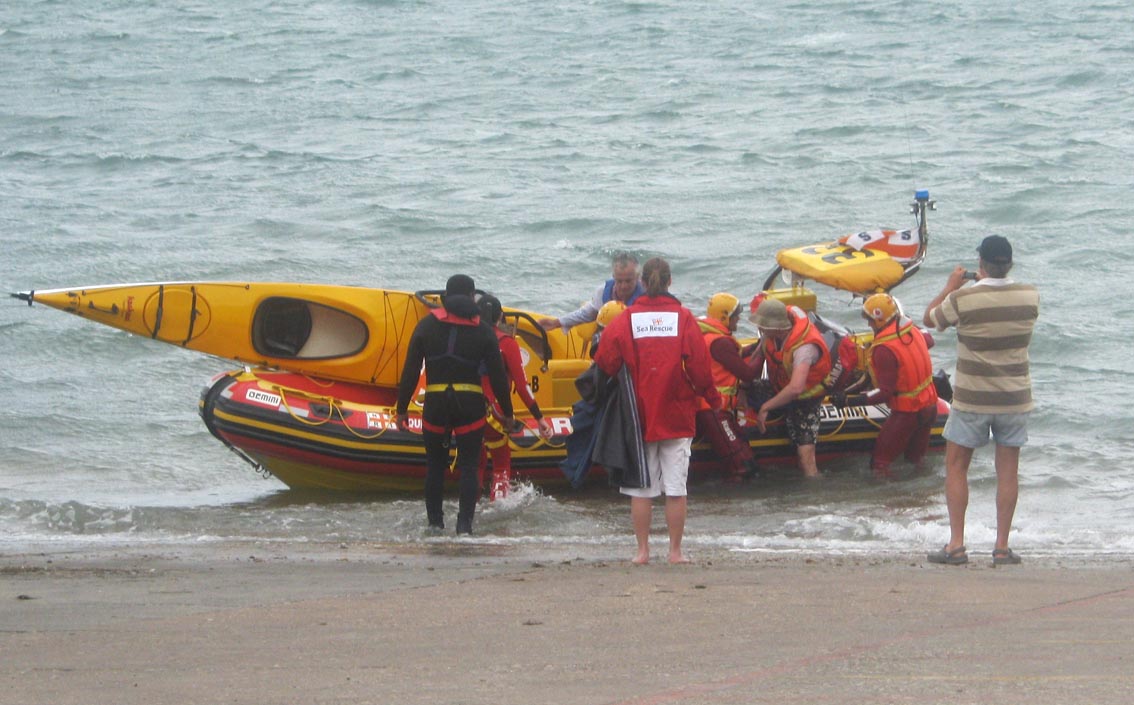