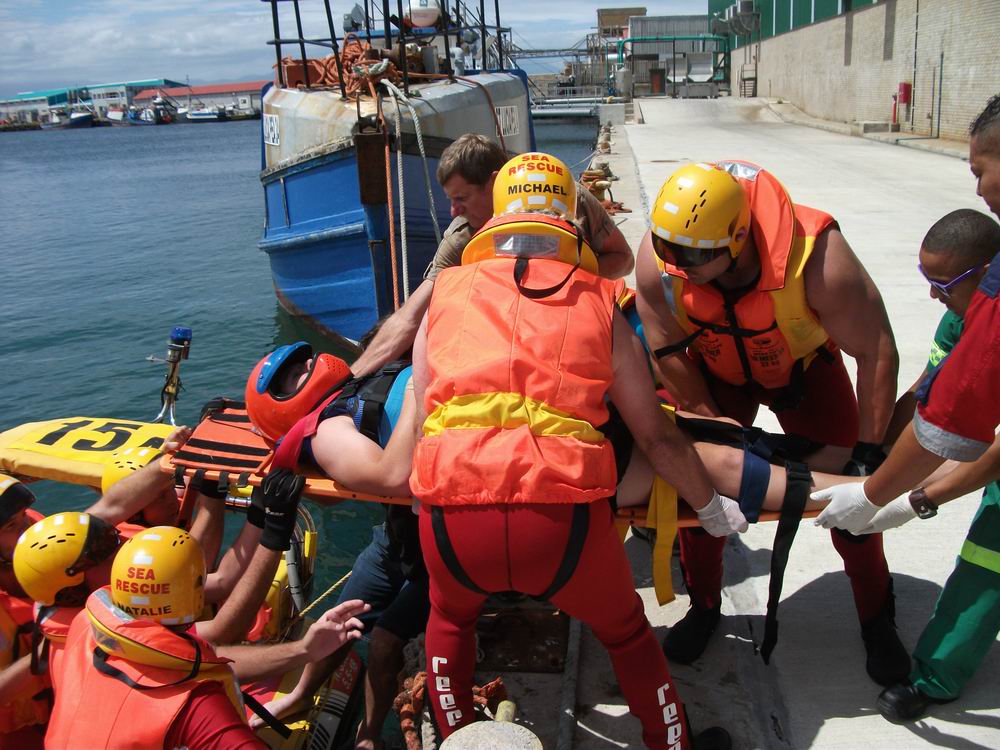 On arrival we found that a 9 meter (10 seater) commercial charter boat, WAVE RIDER, with 8 to 10 people on board, had collided with a 4 meter pencil duck (a small rubber-duck) with 2 men on board throwing the one man, from the pencil duck, into the water and injuring the skipper of the pencil duck, who managed to remain on board. One side pontoon and the nose pontoon on the pencil duck burst.

A police Port of Entry Security boat, which arrived on-scene first, rescued the 17 year old pencil duck crewman, Leon du Plessis, from the water and on the arrival of our sea rescue craft our NSRI medics attended to the the 19 year old skipper of the pencil duck, Marcell van Heerden who was on WAVE RIDER after he had been transferred onto the WAVE RIDER from his own boat after the collision.

Both teenagers are from Alberton. Both were treated for suspected spinal injuries and both were secured to spinal back boards and full spinal immobilization was applied by our NSRI medics as a precaution before they were brought to our sea rescue station, 1 onboard our NSRI craft and 1 onboard the Police boat. Both men have been transported to hospital in stable conditions by ambulances for further treatment.

None of the people on WAVE RIDER were injured and the local skipper of WAVE RIDER, Colin Edwards, brought his passengers back to the harbour.

Police and SAMSA (The South African Maritime Safety Authority) will investigate the accident.

The skipper of the pencil duck, Marcell van Heerden, has also suffered a fractured arm in the collision and doctors will operate to set the fracture.