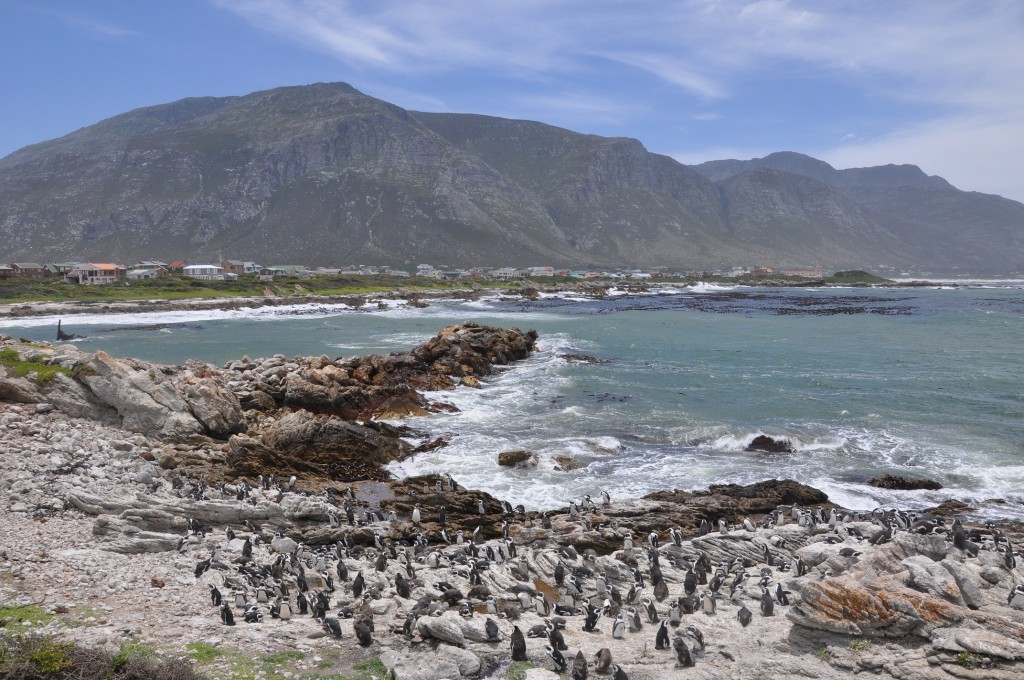 At 22h07 on Saturday, 22 October, NSRI Gordon’s Bay volunteer duty crew were called out following reports of people suspected to be in trouble on the water about 100 meters off-shore of Betty’s Bay, between Gordon’s Bay and Kleinmond.

Jan and Belinda Reuvers, from Plattekloof, Cape Town, on a weekend break at their Betty’s Bay holiday home, were watching tv when they heard a whistling sound but thought nothing of it. A short while later they turned off the tv to go to bed and walking down their passage they heard a definite strong whistle (Jan described it as the kind of whistle a person makes when they put two fingers in their mouth). Through the dark they peered out of the window seaward and saw a faint light bobbing around in the rough sea about 100 meters off the rocks and just out of reach of the breaking 4 meter waves in gusting up to 40 knot winds.
Being sailors (they own the Quantum Sails yacht sail manufacturing company) they realized that whoever was out there was in trouble (thinking at first it may be fishermen on a small boat). They dialed the NSRI to raise the alarm and then Jan went down to the rocks where he managed to shout to two men, who were both bobbing up and down in the swells precariously holding onto their sea kayaks, to hang on as the NSRI were on their way. The light they had seen was from a headlamp on one of the sea-kayakers. Jan and Belinda were dismayed to see that it was two sea-kayakers in trouble in the dead of night on a precarious stretch of coastline in very rough sea conditions.

Stuart Burgess, NSRI Gordon’s Bay duty coxswain, said: “Our NSRI Gordon’s Bay volunteer duty crew launched our sea rescue craft JACK RILEY and SPIRIT OF SURFSKI and our NSRI 4×4 rescue vehicle was dispatched. The SA Police Services, the local Police Community Forum members and the Overberg Metro EMS ambulance and a Metro EMS rescue squad were dispatched.
“On arrival on-scene 2 Gordon’s Bay men were rescued from their sea-kayaks and taken onto our sea rescue craft and we brought them back to our base while treating them for hypothermia. Once safely at our sea rescue base in Gordon’s Bay they were checked by paramedics but found to be in no need of any further help.”

The 2 rescued men, both from Gordon’s Bay, described that they had launched at Hangklip in good sea conditions to paddle. Not planning to go far they soon realized the wind had picked up considerably and they tried desperately until last light to find a safe area to run ashore but they were not able to in the rough seas and at risk of being battered onto rocks if they tried to come ashore. Sea conditions had steadily worsened and as night fell they decided to anchor in a Bay (Betty’s Bay) but they were still pummeled by 4 meter breaking waves and a gusting up to 40 knot wind. They shouted and whistled hoping someone along the coast at one of the houses on the shore would hear them but their cries for help were lost in the wind.
They had no red distress flares, no cell-phone (which also wouldn’t have helped as their was hardly a cell signal in the area), no referees whistle and no one was watching out for their safe return.
Eventually at around 22h00 they saw the lights go out at a nearby house and they whistled and screamed frantically in a last bid attempt and that’s when Jan and Belinda heard them.

This morning (Sunday, 23 October) one sea-kayak remains at anchor 100 meters off-shore and one sea-kayak had broken loose during the night and was found neatly parked on the only stretch of beach (for miles) about a kilometer from the Reuders house and the beach is only about 10 meters wide.
They both returned to the Reuvers this morning to thank them.