At 00h55 we received a call from the 41 foot Riviera motor yacht Sweet Caroline reporting to be off-shore of Protea Banks, on the KZN South Coast, with fishing net tangled in her motor propellors.

On arrival efforts were made to free dive to cut the net but the currents were too strong. Caltex Challenger II to returned to base to collect dive equipment.

A member of the Hibiscus Coast Fire and Rescue Service and a qualified NSRI dive crew member from NSRI Shelly Beach were taken back out to the scene on Caltex Challenger II. On arrival it was found that Sweet Caroline’s anchor line broke and Caltex Endeavour took the  vessel Sweet Caroline under tow as the currents were rather strong.

The two divers went into the water to cutt away the net around both props but after all attempts failed our sea rescue craft continued to keep the casualty craft under tow.

NSRI Durban were placed on alert in case the casualty boat needed to be towed to Durban.

A Police Dive Team from Police Search and Rescue arrived at NSRI Shelly Beach and they were transported out to the casualty boat on NSRI’s rescue craft to attempt to cut the line free by scuba diving.

After all attempts by the Police Dive Unit also failed it was finally decided, at around 08h00 in the morning, for the NSRI Durban deep-sea rescue boat Eikos Rescuer II to launch and then to rendezvous with the towing effort.

The casualty vessel Sweet Caroline is en route from Cape Town to Durban. Crew on Sweet Caroline are three members form NSRI Durban who are commissioned in their private capacity to bring Sweet Caroline  to her home port.

Because the operation took so long, crew on all rescue craft and the 3 original crew members on Sweet Caroline have been replaced by fresh crew.

By 18h00 the towing of the casualty craft towards Durban by the Durban rescue boat, Eikos Rescuer II, had reached Sezela and they are expected to arrive in Durban’s Port after midnight.

A fresh crew have been dispatched on the NSRI Durban sea rescue craft Megan II to rendezvous with the towing effort and again swop crew for a fresh sea rescue crew.

An earlier sea rescue media release, when Sweet Caroline’s owner and his two sons were dropped off in Hermanus after one son succumbed to sea sickness last week, said that Sweet Caroline make of craft was a Bayliner but it is in fact a Riviera make of luxury motor yacht. 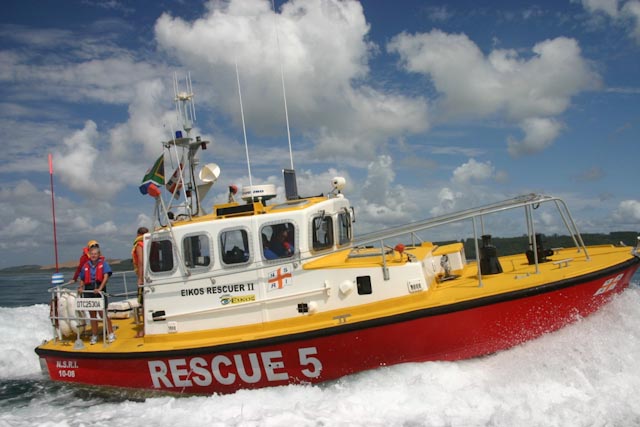