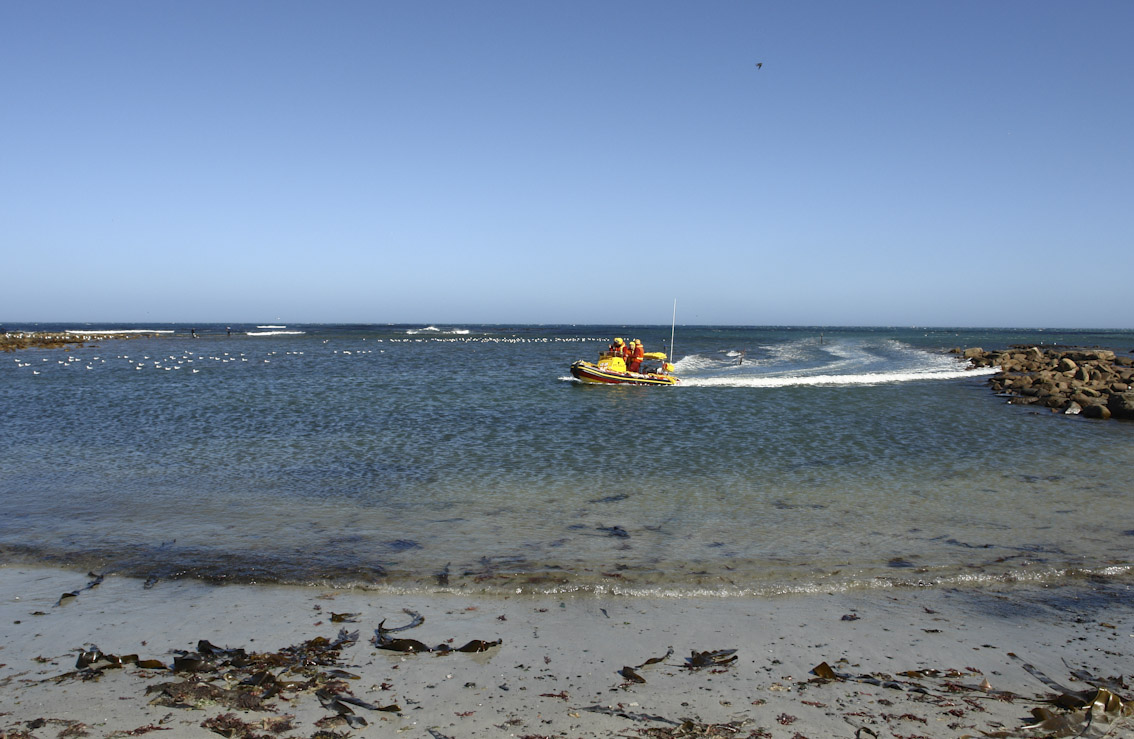 At 01h51 our NSRI Kommetjie volunteer duty crew were activated following reports of 3 men on the snoek fishing boat SLOW BAS reporting to have a snapped throttle cable of their boat and unable to get ashore in rough seas somewhere off-shore of Kommetjie.

Our NSRI Kommetjie volunteer duty crew launched our sea rescue craft SPIRIT OF WINELANDS and a search commenced but no sign of the boat could be found (they only had a cellphone and 1 small cyalume stick onboard with no flares and they were not exactly sure where they were and they had no way to direct our searching rescue craft to their position) and at 02h14 NSRI Hout Bay were activated to assist in the search and the NSRI Hout Bay volunteer duty crew launched their sea rescue craft MTU NADINE GORDIMER and ALBIE MATTHEWS and during an extensive search in very rough sea conditions with a gusting up to 30 knot North Easterly wind and 3 meter choppy sea swells the crew of SLOW BAS reported to have come ashore on their boat at Crayfish Factory, near Scarborough, where they were met by our sea rescue mobile crew and all 3 men, skipper Donovan Williams, 26, and his crew Lorenzo Strauss and Dan van Helzin, both aged in their 30’s and all 3 from Hout Bay, were found to be safe and not injured and they required no further assistance

In a separate incident, while our sea rescue craft were returning to base from the Snoek Boat search a man dressed in dive gear appeared at our Hout Bay sea rescue station, at 02h45, claiming that his friends on a 5.5 meter rigid inflatable rubber duck were adrift at sea after running out of fuel in the vicinity off-shore of Noordhoek with 4 crew onboard.

Our sea rescue craft turned around and following a brief search we found the rigid inflatable rubber duck off-shore of Chapmans Peak with 4 scuba divers onboard.

A tow-line was rigged and our sea rescue craft towed them safely into Hout Bay harbor where they required no further assistance.