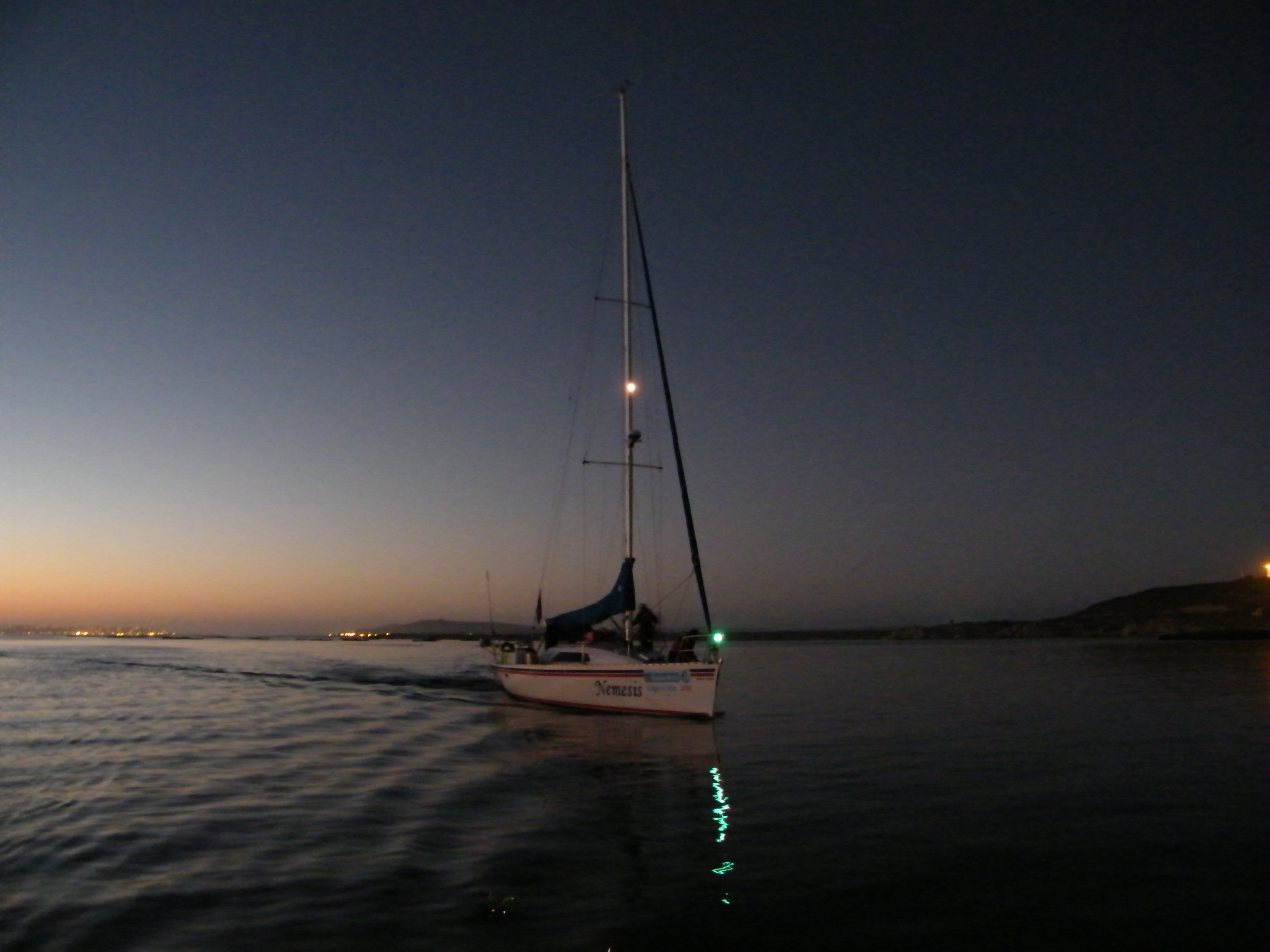 Returning to South Africa from Rio, the 42 foot yacht had rudder failure after being battered by a storm in Mid Atlantic, and was escorted, under their own engine power, into Saldanha Bay harbor.

One of the yacht’s co-owners, Dave Ellis and his wife Sharona, from Randpark Ridge, Johannesburg, had contacted the NSRI in Mykonos on Friday morning at 09h15 requesting assistance on how best to get their yacht, safely into Saldanha Bay.

Following the completion of the Cape to Rio, 4 South African sailors, including a professional yacht’s delivery skipper, had flown to Rio to fetch the yacht, leaving Rio in late February.

On 9th March, 1620 nautical miles off South Africa, Nemesis was hit by a huge storm. The 7 meter plus swells and 60 knot winds caused rudder failure and she was forced to rely heavily on her motor to make headway.

Not having enough fuel onboard to make the distance they made a request to fellow yachtsmen and passing ships for extra fuel. On two occasions, ships in their vicinity made a special detour to give her fuel.

According to the skipper of Nemesis the passing ships dropped jerry cans into the sea for the crew of Nemesis to pick up.

The yacht, Ciao Bella, that had heard of the plight of Nemesis made a special detour to rendezvous with the her and assist with additional water and fuel, but, ultimately, this was not required as Nemesis was making good progress towards South Africa.

With the assistance of the Royal Cape Yacht Club, the owners were able to arrange for additional provisions and fuel to be sent from Cape Town, on a South African built charter boat, which rendezvoused with Nemesis to hand over much-welcomed supplies.

A yacht that left South Africa, bound for the Mediterranean, was requested to deliver a purpose built rudder for Nemesis and was to rendezvous with her. For a 12 hour period before the expected rendezvous, communications between the two yachts could not be established. This and concern about an approaching low pressure system, lead to the decision to abort the rendezvous, forcing Nemesis to press on without the rudder.

After receiving Dave and Sharona’s call on Friday morning our Mykonos crew volunteered to launch and guide Nemesis in as they made their final approach to Saldanha.

At 02h00 on Saturday morning the crew of Nemesis reported, via vhf radio to the Maritime Radio Services, that they were 9 nautical miles from Saldanha Bay.
Our sea rescue volunteers launched at 04h00 and met up with the yacht 6 nautical miles off-shore.The yacht, with a large number of Jerry cans strapped to the deck, was escorted into Saldanha Bay under her own power. 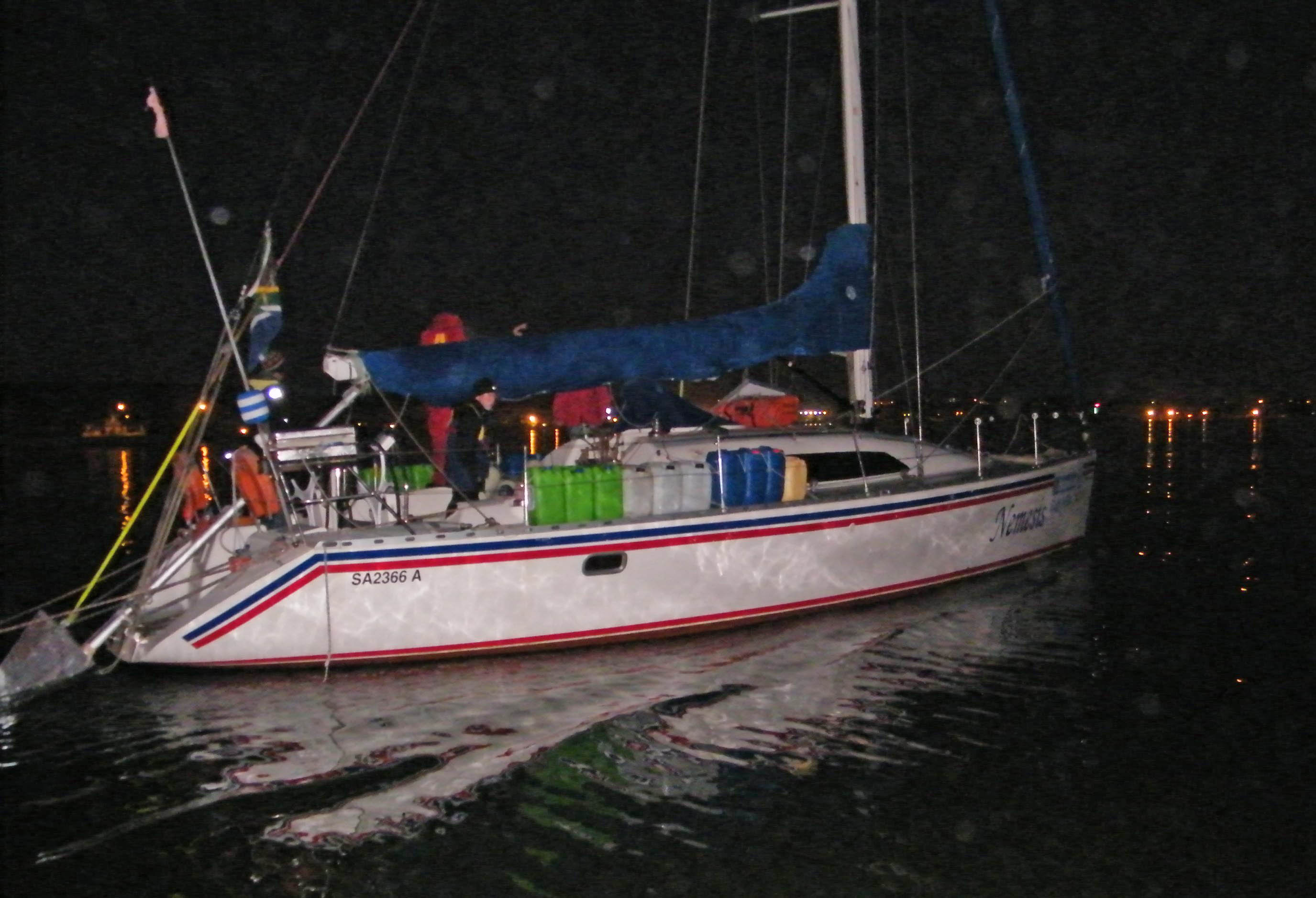 The crew of Nemesis were in good spirits. They are skipper Gareth Baxter, 20 of Weltevreden Park, Johannesburg, Charles Ineson, 64 of Senderwood, Johannesburg, Tim Gibbons, 20 of Morningside, Johannesburg and Alida Goosen, 26 of Greenpoint, Cape Town.

Nemesis will make repairs to her rudder in Saldanha Bay before continuing on to Cape Town. 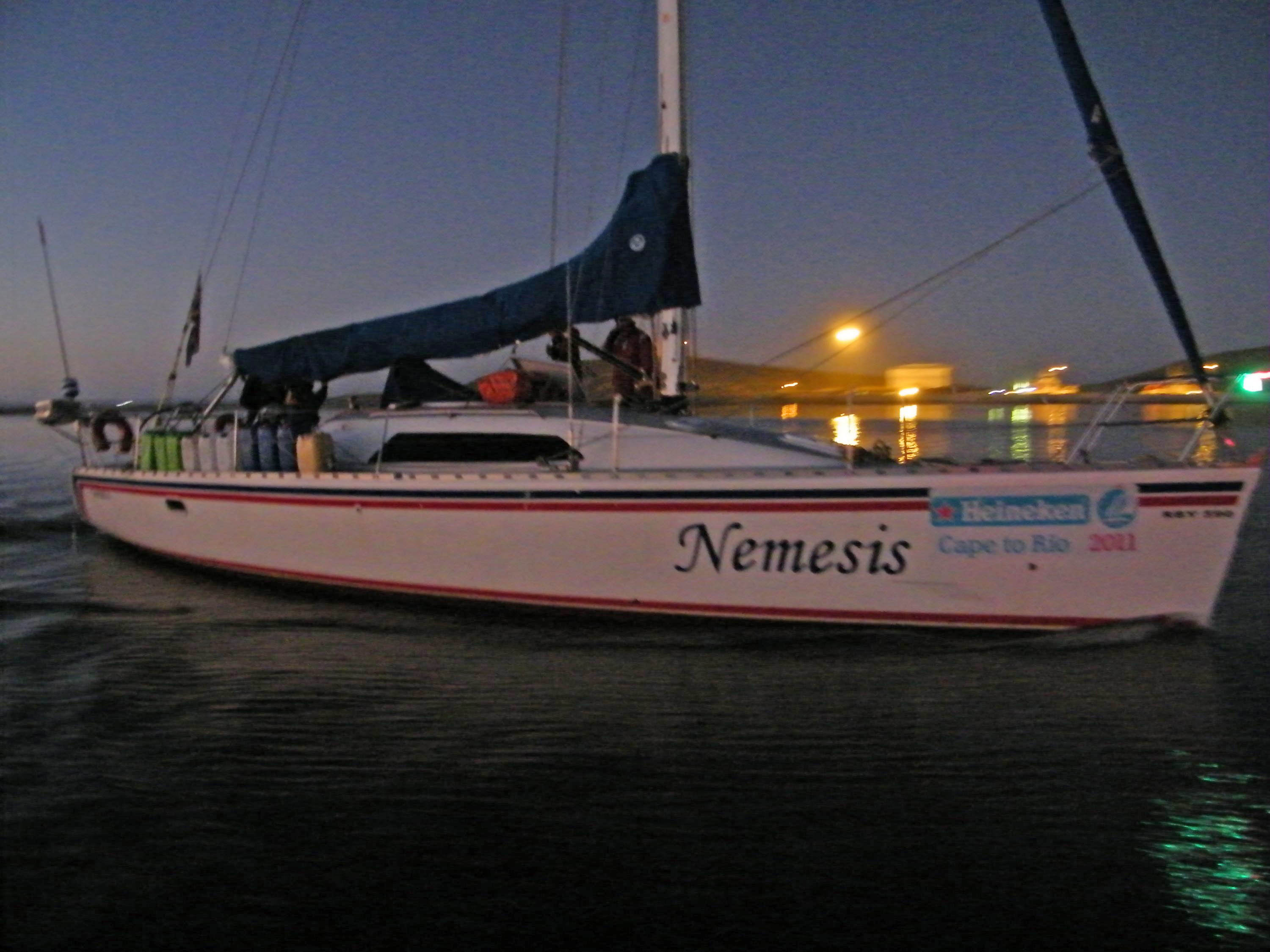