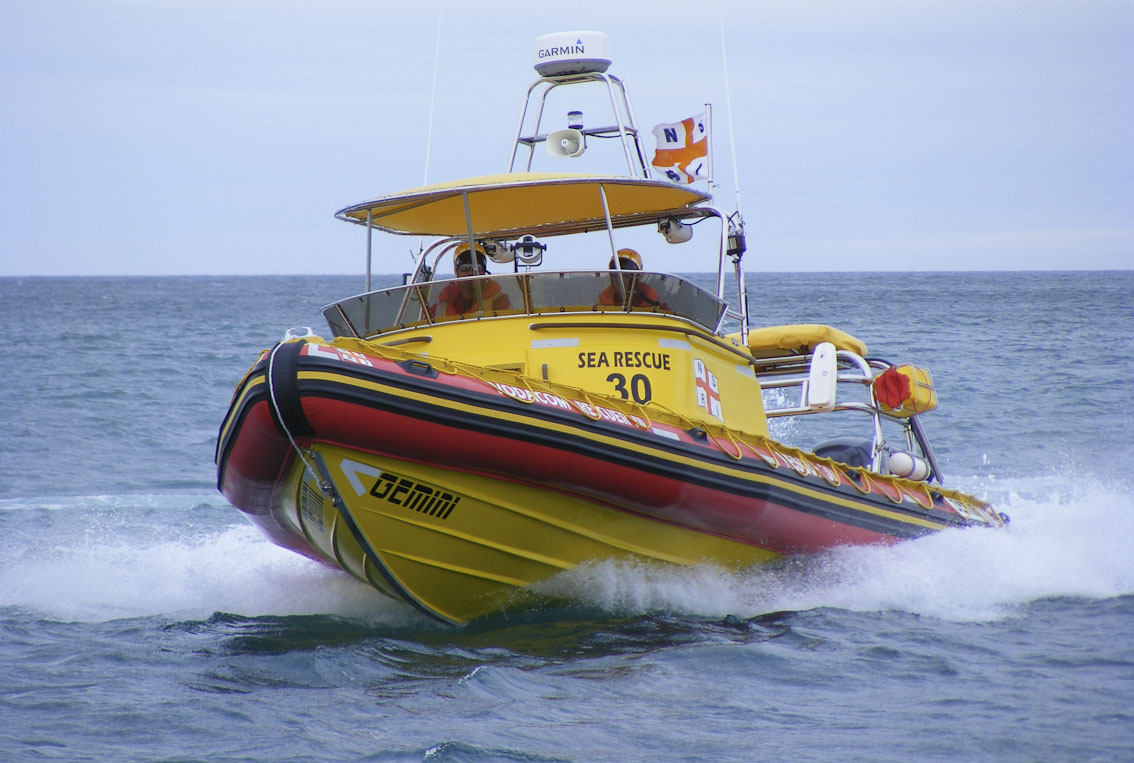 This is the English version of the story published in Afrikaans in the Summer 2010 / 2011 magazine ” Sea Rescue”:

At the 2010 Sea Rescue AGM, Agulhas Coxswain Jaco Louw was presented with a Gallantry Award and his crewmen, Reinhard Geldenhuys and Darryl Moon, received Directors thanks for the rescue of five people from the yacht Redfin.

These awards are not handed out easily. Here is the story of the Redfin rescue.

The weather off Cape Agulhas was dreadful. Huge 7 meter swells were driving towards the shore, it was pitch dark and the wind was onshore. Skipper Lars Strydom had sailed from Hout Bay with a crew of four in his yacht that was also his home. He knew the vessel intimately, he knew how the old fashioned Junk rig handled, and the strength of the steel hull. He had done his weather checks before sailing and knew that a big front was coming, and he had worked out that by the time it hit, he would be safely around Cape Agulhas.

The front however moved faster than anticipated and Lars found himself in huge seas being forced closer and closer to the land, his Junk rig preventing him from forcing the bow closer into the wind. and then things started to really go wrong. The head sail was damaged, and repaired, and then the tiller arm broke. In three places.

Being a practical person Lars jury rigged the tiller, “ but in the process I chopped off the tip of my pinky ( little finger).

“ The biggest problem was that due to the motion one of my batteries had shorted out and I lost all my onboard electrics. I couldn’t start my engine to clear the coast,” said Lars.

“ Thats when we discussed calling the NSRI, but the wind, which had dropped while we were making repairs, came up favorably and we realised we could sail for Struisbaai.

“As we made our approach to Cape Agulhas the wind went 90 degrees from West through to South East and we were blown onto the wrong side of the Cape.

“I turned the boat around to head back up to Quoin Point. Then the Tiller socket broke and I lost steering, the wind shifted again to South, and we were being blown towards the land. we knew knew now we were in the s*** and called the NSRI.

“While they got going, I used the sails to steer, allowing the rudder to freewheel. I was amazed at how well she handled, but I couldn’t “drive” the boat into the wind because I could not put pressure onto the rudder.

“I used a bobbejaan spanner and pushed with my feet, it worked well, but eventually I broke that as well,” said Lars.

At 23h42 NSRI Agulhas was activated and the 8.5 metre rescue craft “ Vodacom rescuer VII was launched with Jaco Louw at the helm. Swells were reaching seven metres and the wind gusting at 45 knots. It was so dark that it was nearly impossible to read the sea and Agulhas station commander called for backup. Simonstown launched their deep sea Breede class rescue vessel and Hermanus towed their 5.5 meter towards the responding volunteers.

Nobody said it, but if the Agulhas team got into trouble … help was far away.

Says Jaco, “ If we did not go … there was nobody else. There was no option. I just stayed calm and we went.”

Because of the severe conditions it took the Rescue 30 crew two hours to reach the casualty.
On scene the sea conditions were a little better than what the rescue crew had fought through to get there, as Redfin was partially in the lee of the land. Jaco Louw approached the casualty at 45° in her lee and on her port quarter.  In three passes taking about 20 minutes, the 4 crew of the yacht, two women and two men, were taken off without too much difficulty onto the bow of the rescue boat.

And then Lars refused to get off his boat. It was just too much for him to give up.

Jaco, at the helm of the rescue boat decided he could spend no more time with the rudderless yacht. The wild sea conditions prevented him putting a tow on her, he had four hypothermic patients on board, and he radioed his base saying he was leaving the skipper behind.

Cape Agulhas station commander, Shane Kempen, was horrified. He called Lars on his cell phone, “and I explained a few things to him.”

Says Lars, “I thought I could make it, but the guy said if I come short in those breakers I am tickets. He very calmly explained my situation. He was sympathetic to my feelings but firm about explaining my situation, and I agreed to get off.”

Jaco turned the rescue boat around, and headed back to find the yacht for a second time, this time taking Lars off.

“ I was devastated to leave my boat floating, said Lars.

“ The last I saw was her sailing away into the dark.

“It broke my heart.”

Speaking to Lars a couple of months after the incident he is full of praise for the rescue crew.
“Those guys did a sterling job. They are a really nice bunch of people. It was scary and tricky and they had no real reason to be there other than for us.

“I really appreciate that.”

Note :  The week after Redfin was smashed into the rocks (“It sounded like gunshots,” said Lars) Sarel Vermeulen, a Struisbaai local, brought his excavator to the stranded yacht and pulled it ashore. There the mast and keel is to be removed before fellow sailor Stuart Davidson takes the yacht, via flatbed truck, to PE, where Lars now works, at no charge.

And Lars says : “ I would really appreciate it if in your article you could make mention that the entire community of Struisbaai were incredibly helpful. Particularly Frederik Neethling, his wife Nelmarie, and his son Derick, also Francois Du Toit (Choppie) and Stiaan Lourens.”

You can read the magazine online at : http://tinyurl.com/23xg7hw