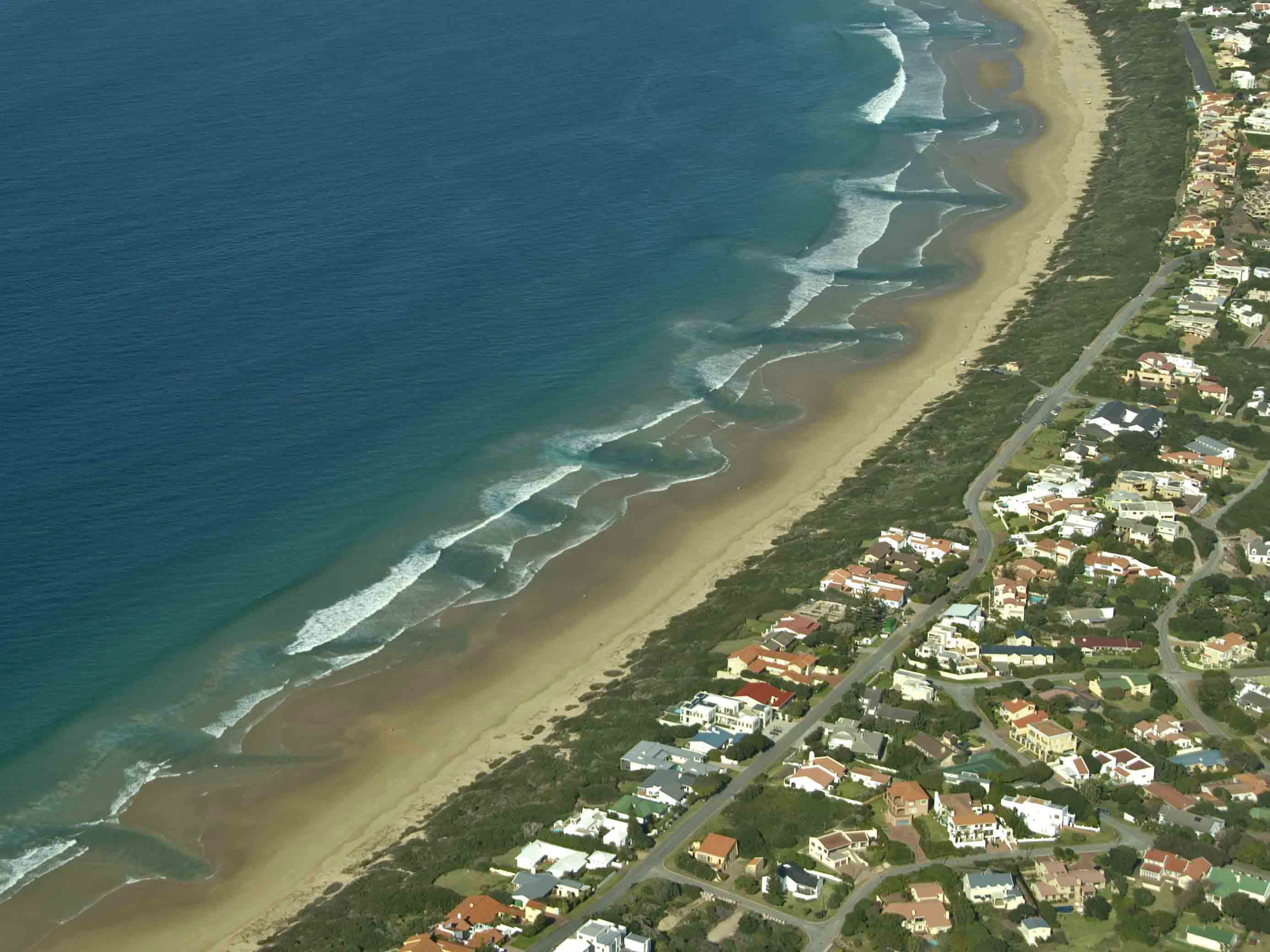 This picture shows very clearly what rip currents look like from above. The water flows in towards the beach over sandbanks (It is a lighter colour and the waves break evenly over these areas). To get back out to sea sometimes a rip current – or ‘river’ of water – is formed between two sand banks (waves seldom break in a rip current and the water is darker green or blue because it is deeper).

Rip currents claim the lives of many people each year. Below is a description of how to spot them and what to do when caught in one.

You can download an A4 poster on rip currents here.

You can watch a 6 minute video on rip currents here.

… And in 20 seconds see what a rip current looks like.

What is a rip current? Rip currents are able to develop anywhere there are breaking waves. Bigger waves produce stronger currents and these “rivers” of current are produced by water draining from the beach back out to sea. They happen all the the time at many beaches and are the biggest danger that visitors face in the water.

Often rip currents move slowly enough to barely be detected. But given the right circumstances of waves and beach profile, they can develop into currents moving at speeds of up to 2 metres per second – faster than any of us can swim. Ranging in width from just a few feet to hundreds of yards, they pull to just behind where the waves form.

A rip current is not the same as a rip tide which is formed as the tide ebbs and flows through a narrow opening such as an estuary. The Knysna Heads are a great example of where you will find extremely dangerous rip tides.

How to spot a rip current: As with all risks, avoiding rip currents altogether is safest. To do this swim at a beach where lifeguards are on duty and swim between their flags.

Although an untrained eye may struggle to see rip currents, stronger rip currents can give off some telltale signs. With patience and careful observation it is not hard to see that water in a channel or ‘river’ between breaking waves is moving away from the beach. The current may not flow straight out from the beach. It may flow at an angle or have a bend or two in it before it gets to the backline where waves are forming.

This is what you should look out for:

Often, the best resource to help you avoid rip currents – not surprisingly – are lifeguards.

Swim only where lifeguards are on duty, and if they are not on duty do not swim. 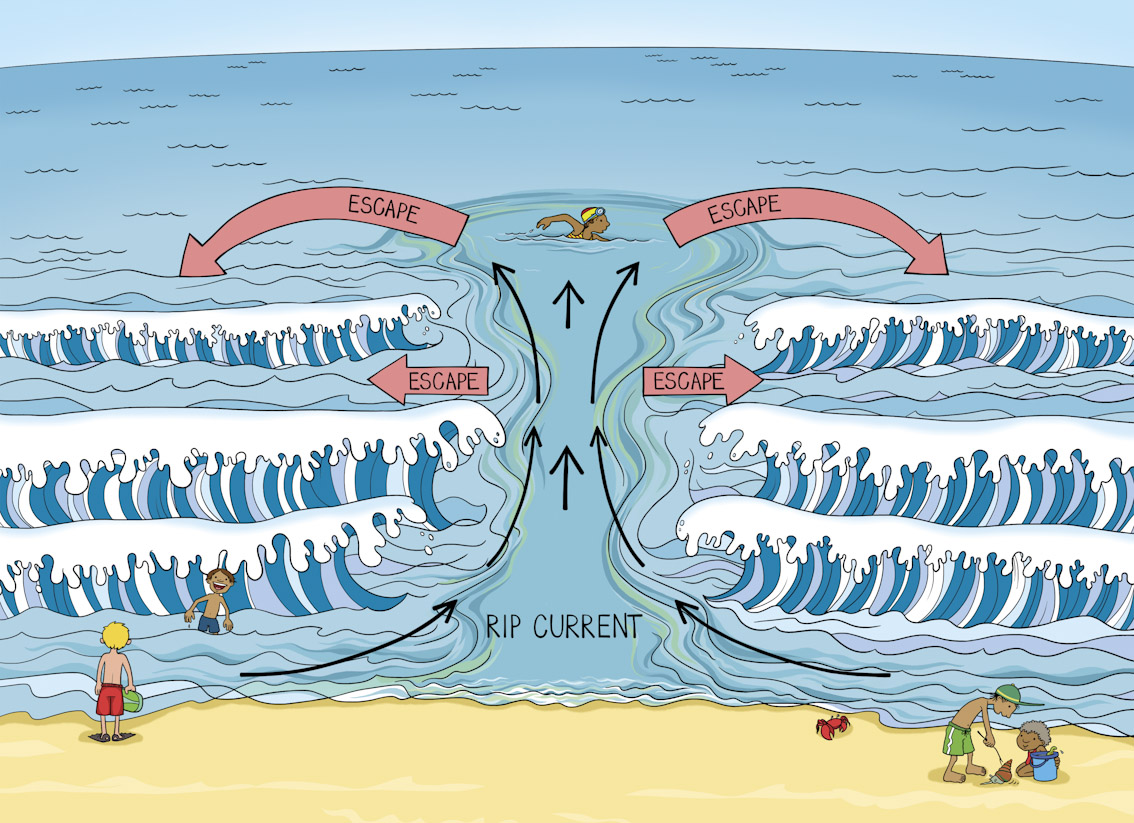 If avoidance fails: If you are caught in a rip current the most important thing is to not panic. Stay calm and force yourself to relax.  You are not going to win a fight with the ocean.  Swim slowly and conservatively out of the current or relax and let it carry you out past the breakers until it slacks. Take note from looking at the beach of the direction that the current is pulling you, think of it like a river and remember to get out of a river you would swim to the river bank. This means that in a rip current you should swim at 90 degrees to the direction that you are being pulled and then use the waves to help you get back to the beach.

Contrary to myth – rip currents are not an “undertow.”  A rip current will not pull you under the water.  So long as you can tread water or float you will be safe until you can escape the current, by swimming to the side (out of it) and then back to the beach.  Be sure to maintain a slow and relaxed pace until you reach the shore or assistance arrives.  If you are swimming at a beach where lifeguards are on duty ─ and you should never swim if lifeguards are not on duty  ─ they will be able to help you. Raise your arm and wave for help.

If you see someone in a rip current:

Do not go in to help unless you are trained and have emergency flotation such as the NSRI Pink Rescue Buoy or a surf board. If you are not trained in water rescue throw something that floats into the rip current which will carry it out to the person in difficulty. At some beaches this will not work and the only option is to call for help. The Pink Rescue Buoy signs have emergency numbers for the closest NSRI station on them or simply Google ‘Sea Rescue’ which will give you the closest Sea Rescue Station’s emergency number.