At 12h16, Thursday, 04th January, NSRI Port Alfred duty crew were activated following reports of a multiple drowning in progress near to Kiddies Beach in the Kowie River.

On arrival on the scene 6 children, believed to be aged between 7 and 14, and a 21 year old young women all from Bathurst and some believed to be related, were already out of the water and bystanders were providing medical assistance.

CPR efforts by NSRI and paramedics were conducted on the 21 year old woman but sadly after all efforts were exhausted she has been declared deceased.

The Forensic Pathology Services will take the deceased body into their care and an inquest docket will be opened by Police.

It appears that the group of children and the adult were swimming at a sand bank in the Kowie River, the sand bank, near to Kiddies Beach, is known for being able to stand waist deep in the middle of the river.

The effect of the Spring Tide (during full moon) appears to explain their wading on this sand bank to an area further along the sand bank and deeper than expected (because of the high Spring tide).  Suddenly all 7 persons were out of their depth and, according to eye-witnesses the children, some who appeared unable to swim were grabbing onto the adult and in doing so they were forcing her head underwater and she disappeared under water.

Bystanders raised the alarm and leapt in to assist and were able to rescue the 6 children and then searched to find the young adult underwater and getting her to shore as well.

NSRI commend a Multi Security officer who had witnessed the incident and leapt into the water to rescue the casualties and to the 2 men from Royal Alfred Marina and staff at Outdoor Focus and the other unidentified bystanders who assisted. Your efforts contributed to saving the children’s lives.

The sea rescue craft Spirit of St Francis II was launched and NSRI rescue swimmers raced to the beach to join 4 Kouga Municipal lifeguards, 3 Volunteer lifeguards and 2 local surfers who were in the surf attempting to rescue 9 persons from the water at Anne Avenue Beach (an unprotected beach not patrolled by lifeguards) who had been swept out to sea by rip currents.

Once all 9 casualties were out of the surf they were all medically checked by paramedics from Private Care ambulance services and required no further medical care.

It was then confirmed that one person remained unaccounted for, a local 28 year old man.  The NSRI sea rescue craft, a Private fixed wing aircraft, a Police helicopter and a K-9 Search and Rescue team and a Police Dive Unit joined in the ongoing search operation but despite an extensive search no sign of the missing man has been found.

Police will continue an ongoing search and recovery operation and Police have opened an investigation.

NSRI commend the lifeguards and the 2 surfers who rescued 9 persons from the water and NSRI thank the private plane that assisted in the ongoing search for one man who sadly remains missing. 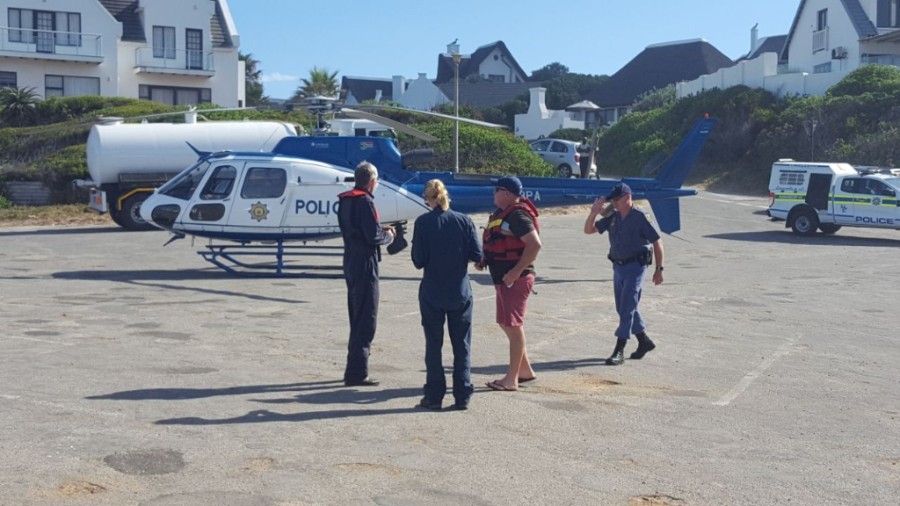 Picture attached: By NSRI St Francis Bay. A Police helicopter crew in a briefing before launching to join the search operation.

At 10h56, Thursday, 04th January, NSRI Kommetjie duty crew responded to Long Beach Kommetjie in a small river mouth in a shallow surfline where a 70 year old woman, found floating face down in the water by bystanders, after being dumped by a wave while body boarding, had been rescued by a bystander and brought to shore where she was reported to be unconscious.  NSRI Kommetjie medics and CMR (Cape Medical Response) responded.  On NSRI arriving on the scene the woman was found in a critical condition and stabilised by NSRI medics before being secured on a trauma board with her Cervical Spine secured after suspicions that she may have suffered a neck injury and she was transported off the beach by NSRI to the waiting ambulance at the car park and she has been transported to hospital by CMR ambulance.

At 16h18, Thursday, 04th January, NSRI Kommetjie duty crew responded to Noordhoek Beach where a man, believed to be aged 24, was swept out to sea by rip currents after going into surf to cool off while playing soccer on the beach with friends.  After disappearing under water friends had run to the built up area some distance away where the alarm was raised.  Our NSRI rescue Quad Bike with rescue swimmers responded and we launched the sea rescue craft Spirit of Winelands.  During a search, 100 meters off-shore of Noordhoek Beach, the body of the man was spotted floating under water and NSRI Kommetjie rescue swimmers were deployed into the surf and the body was recovered and NSRI paramedics confirmed that he was deceased.  The body was brought to the NSRI sea rescue base and the body of the deceased man has been taken into the care of the Forensic Pathology Services and Police have opened an inquest docket.

Eye-witness Jan de Kock, from Tamboerskloof, and his 7 year old daughter, were walking on the beach between Camps Bay Beach and Glen Beach when at 13h50 he noticed a man searching amongst rocks for his daughter who had been swept out to sea at Glen Beach.  The girl had been swept out to sea, her dad had jumped in to try to help and a 60 year old bystander had also jumped in to help.

The whole incident had taken less than 5 minutes.

Jan called the Police to raise the alarm and lifeguards and Cape Town Fire and Rescue Services arrived first followed by paramedics (Community Medics and ER24 ambulance services) and the SA Police Services.  NSRI commend all who helped in this tragic drowning incident for their swift actions in trying to save this mans life and for helping the unidentified dad and his daughter.  Condolences are conveyed to family of the deceased man.

NSRI Bakoven were placed on alert when it was confirmed that the patient was out of the water.

According to ER24 ambulance services the man was sadly declared deceased by paramedics after all efforts to resuscitate him were exhausted.

The body of the deceased man has been taken into the care of the Forensic Pathology Services and Police have opened an inquest docket.

At 16h35, Thursday, 04th January, NSRI Gordons Bay duty crew diverted the sea rescue craft Spirit of Mercantile, patrolling in the area at the time, to the Metropole Plaza where members of the public had rescued a 12 year old female, from Khayelitsha, from the water and they had started bystander CPR (Cardio Pulmonary Resuscitation) efforts.  On NSRI arriving on the scene GB Med Security ambulance services were already in attendance and the females heartbeat and spontaneous breathing had been restored during CPR efforts and she has been transported to hospital in a serious but stable condition by GB Med Security ambulance.  The bystanders and the paramedics from GB Med Security are commended for their swift actions.