A NSRI Pink Rescue Flotation Buoy at a Wilderness beach was used by a brave bystander to save the life of a teenager today.

At 12h05, Thursday, 28th December, NSRI Wilderness duty crew were activated following eye-witness reports of a drowning in progress in the sea in front of the Wilderness Hotel.

An NSRI sea rescue craft was in the process of being launched and lifeguards were also activated by NSRI to respond directly to the scene using their quad bike – approximately 3 kilometers from their station.

When lifeguards arrived on the scene, they confirmed that a 16-year old was successfully rescued from the water by a member of the public who had used an NSRI Pink Rescue Flotation Buoy that is stationed at the foot of the stairs to the beach.

Lifeguards waded into the surf to assist the bystander with the casualty that he had just rescued to get out of the water the last few meters.

The teenager was not injured.

WC Government Health EMS and George Fire and Rescue Services responded and ER24 were also activated by NSRI to respond.

NSRI spoke to and commended the bystander rescuer, Mr. Johan Lamprecht, from Strand, Cape Town, who had noticed the teenager in trouble in the surf and he had grabbed the NSRI pink rescue flotation buoy and using the information on the board his family members raised the alarm while he jumped into the surf with the rescue buoy. He was able to reach the teenager and get him safely to the beach as lifeguards were arriving, followed by NSRI and by the emergency services.

In eye-witness Claudine’s own words: “The Pink Buoy was a life saver, it definitely helped to save a life”.

NSRI commend Mr. Lamprecht and his family members for their quick actions in grabbing the Buoy, and the family members who used the information on the NSRI board to raise the alarm.

Multiple eye-witnesses had also called NSRI Wilderness to raise the alarm and we wish to take this opportunity to thank the callers for their concern and quick actions.

As part of the NSRI’s National Drowning Prevention Drive, NSRI and Lifesaving lifeguards enjoy a close working relationship and the Wilderness lifeguards were able to get to the scene quickly on their quad bike from the Lifeguard Protected Beach which is 2.8 kilometers from the incident. NSRI commend this efficient close working relationship and the quick response by the Wilderness lifeguards.

The NSRI Pink Rescue Flotation Buoys are stationed at unprotected beaches along the Southern Cape Coastline and parts of the Eastern Cape Coastline, with the aim to reach around the coast, and to bolster another initiative by NSRI that saw flotation devices placed at some farm dams.

The roll-out of the NSRI Information Boards with the Pink Rescue Flotation Buoys started early November in a project that NSRI have worked on for over a year and they are still being rolled out in a pilot project made possible by corporate and public donations and makes up part of an extensive National Drowning Prevention Campaign started by NSRI during 2017 which has seen the Pink Rescue Flotation Buoy project and a number of other measures and initiatives deployed by NSRI with the cooperation of City Councils, Municipalities, Lifesaving, emergency services and communities around the coastline and at some inland water ways in a rapidly growing National effort to make our coastline and inland water ways safer and to prevent drowning accidents.

The flotation buoys are bright pink so that they can be easily spotted on the water by responding resources and they are unique to NSRI allowing us greater public participation and cooperation in the protection of the Buoys on the beaches.

The board and the buoys cost R1 400 each not including the pole and the delivery cost and the planting of the pole. – You can purchase a sponsorship online on our Shopify site – https://sea-rescue-supporter.myshopify.com/collections/help-save-a-life 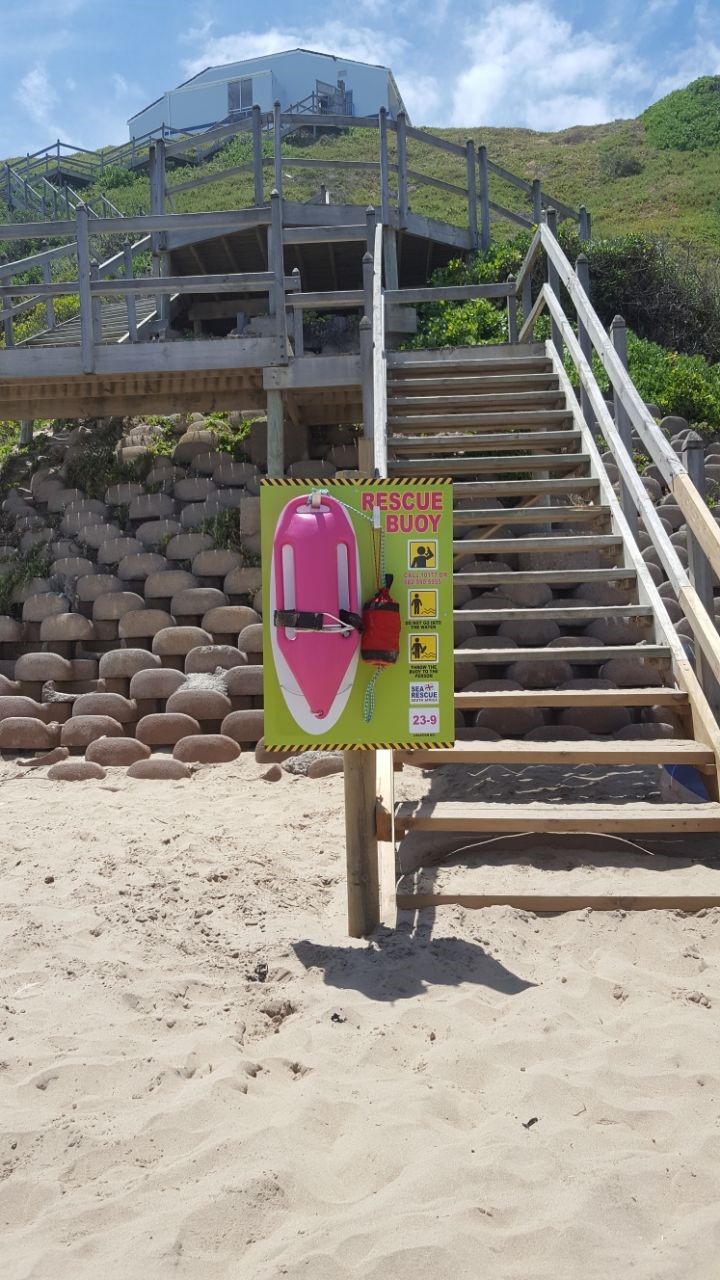