On arrival on the scene all 5 fishermen were taken off the rock and transported to shore aboard the sea rescue craft in 3 relays.

Once all were safely ashore no further assistance was required.

Earlier in the day, at 10h34, NSRI Agulhas duty crew investigated eye-witness reports of a White shark carcass found in shallow surf by bystanders near to Struisbaai harbour.

The approximately 4.5 meter carcass was recovered onto the beach by NSRI Agulhas where Marine Scientists and the Department of Environment – Oceans and Coasts made arrangements to have the carcass removed. 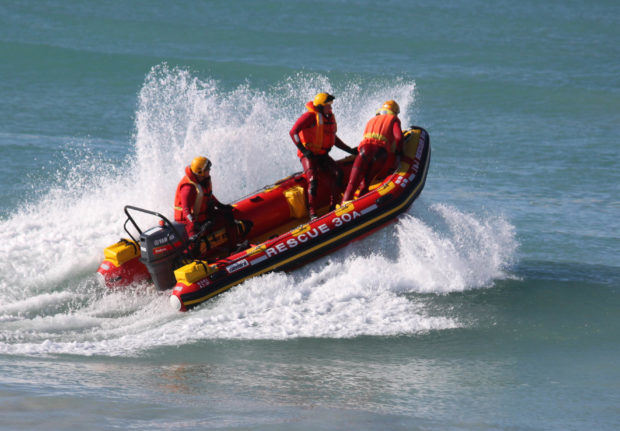 At 17h00, Sunday, 07th May, NSRI Hermanus duty crew were activated following reports of a 16 year old local male surfer fallen down an embankment at Bayview, a popular surf area in Hermanus.

The teenager had gone there to check on the wave action and planned to go surfing when he fell about 3 meters down the steep embankment.

He was able to send his mom a message on whatsapp and the alarm was raised.

The teenager was treated for lacerations to his right eye and a hip injury.

He has been transported to hospital in a stable condition and he is expected to make a full recovery.