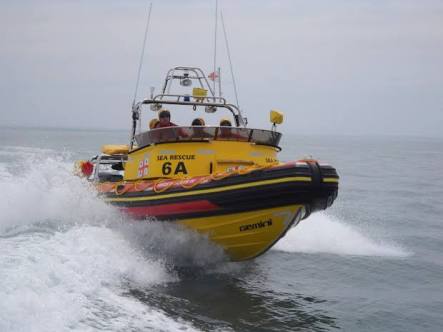 The Sea Rescue craft Eikos Rescuer IV was launched and our NSRI rescue vehicle, towing the sea rescue craft Spirit of Surfski IV, was dispatched to be launched at the Noordhoek ski-boat club.

NSRI activated the Noordhoek Divers (Wildside Divers) who diverted their craft Blue Pearl II with 9 Wildside scuba divers to join in the search.  Coastal Water Rescue had initiated a shoreline search and the Tactical Task Force had initiated a search using their thermal imaging camera.

Port Elizabeth Air Traffic Control were notified and broadcast to all light aircraft in the area to be vigilant and to keep a look-out for a missing person on the water in the area and to report any sightings.

The two men had free-dive searched in an effort to locate the teenager after he had failed to surface.  Reportedly after only finding his speargun they had then surfaced, raised the alarm, and they had then continued to free dive search.

On our arriving on the scene we were notified by skippers of the boats in attendance that multiple scuba divers and free divers were in the water searching.  We stood off and shortly after our arrival the body of the teenager was located and recovered to the surface by his two fellow spearfishermen.  His body was taken aboard our sea rescue craft and the teenager was confirmed to be deceased.

The body of the teenager was brought to the Noordhoek ski-boat club where his body was taken into the care of Police and the Forensic Pathology Services.

Family of the deceased teenager are being supported by Police trauma counsellors.