It appears that while negotiating the river mouth the boat propellor sheered off after hitting a rock causing the boat to be caught in the breaking surf. The couple were not injured.

RICHARDS BAY: At 11h50, Saturday, 09th April, NSRI Richards Bay duty crew were activated following reports of a fisherman fallen in amongst Dolosse off the South Pier in Richards Bay Port. Sea Rescue craft were launched and on arrival on the scene it was found that the SA Police Services and Netcare 911 paramedics were on the scene.  Paramedics had declared the adult male fisherman deceased. It is believed that the fisherman had been swept off the pier by waves. The body of the man was recovered by Police and paramedics. Condolences are expressed to family of the deceased man.

SALDANHA BAY: At 07h46, Sunday, 10th April, NSRI Mykonos duty crew were activated by the Transnet National Ports Authority (TNPA) following a request for assistance from the Long Line fishing boat Boloko 1 reporting a 31 year old crewman onboard (believed to be from Cape Town) suffered a suspected heart attack aboard the boat which was heading towards Saldanha Bay after confirming that the fisherman was deceased.

The SA Police Services requested NSRI’s assistance to transport Police and SAMSA (SA Maritime Safety Authority) investigators to the boat on her arrival at anchorage outside the Saldanha Bay Port.

At 09h43, the Long Liner arrived outside of Port, and NSRI Mykonos launched the sea rescue craft Spirit of Freemasonry accompanied by Police and SAMSA investigators and a WC Government Health EMS rescue paramedic. On arrival at the Long Liner the EMS rescue paramedic and investigators boarded the boat and the fisherman, confirmed to be deceased, was transferred onto the sea rescue craft, investigations were concluded by authorities who suspect no foul play, and the body of the deceased man was brought to shore and handed into the care of the Forensic Pathology Services. Police have opened an inquest docket. Condolences are expressed to family of the deceased man.

HEROLDS BAY: On Sunday, 10th April, NSRI Wilderness duty crew responded to Voelklip, Herolds Bay, following reports of an angler, a 32 year old male from George, fishing with friends, reported to be in the water and disappeared under water.

It was not clear what caused the fisherman to be in the water but suspected that he had been swept into the water by waves while angling. The sea rescue craft Spirit of Rotary 100, a sea rescue vehicle, the EMS/AMS Skymed rescue helicopter and WC Government Health EMS, George Fire and Rescue Services and ER24 ambulance services responded.

During an extensive search the body of the man was found in amongst a gully, in amongst rocks, and an NSRI rescue swimmer was deployed from the Skymed rescue helicopter and the rescue swimmer initiated CPR (Cardio Pulmonary Resuscitation) efforts on the man who was then airlifted to the beach by the Skymed helicopter (using a static line long line hoist) and once on the beach paramedics continued with CPR but after all efforts to resuscitate the man were exhausted he was declared deceased by paramedics.

The body of the man has been handed into the care of the Forensic Pathology Services and Police have opened an inquest docket. Condolences are expressed to family of the deceased man. 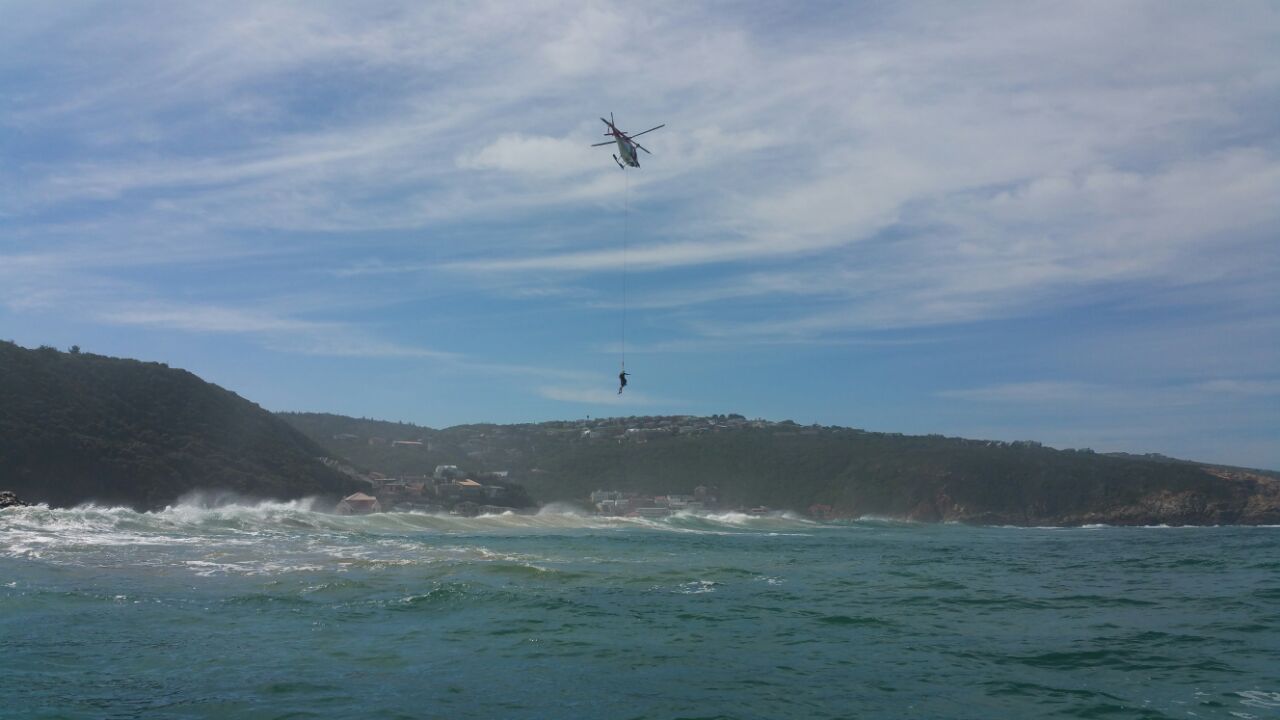