At 11h17 on Saturday the 12th of March, NSRI Simon’s Town and NSRI Kommetjie duty crews, while on a routine stand-by in Fish Hoek Bay at the There and Back Hobie-Cat Regatta, at Fish Hoek Beach, were alerted by the Fish Hoek Sailing Club control of a drowning in progress nearby,on the Clovelly side of Fish Hoek beach (not related to the Regatta).

NSRI rescuers aboard the sea rescue craft, from NSRI Simon’s Town and NSRI Kommetjie, that were standing-by, diverted their attention to where the incident was being reported to be happening and two men could be seen in difficulty in the surf-line and appearing to be being swept out to sea by rip-currents.

The NSRI Simon’s Town sea rescue craft Spirit of Surf-Ski II responded to the scene and on arrival on the scene NSRI rescue swimmers were deployed into the surf. The two men, a father, age 67, and his son, age 37, were rescued onto the beach.

CPR (Cardio Pulmonary Resuscitation) efforts were commenced on the 67 year old man who was found to be pulseless and breathless and despite extensive CPR efforts by paramedics, he was declared deceased. His body has been taken into the care of the Forensic Pathology Services.

Medical treatment was carried out on the 37 year old man who was in a serious condition suffering non-fatal drowning symptoms and chest pains. The EMS/AMS Skymed rescue helicopter was activated and the man was airlifted to hospital in a serious but stable condition and is expected to fully recover.

Sincerest condolences were conveyed to family of the deceased man by the emergency services teams.

The 67 year old deceased man is a Fish Hoek resident and his 37 year old son, a South African, is on holiday in Fish Hoek from the United Kingdom where he currently works and lives.

It appears that while they were swimming the father may have got into difficulty and NSRI believe that the son who was swimming nearby had gone to try and assist his father.

Then at 11h52 on Saturday the 12th of March, NSRI Simonstown duty crew were activated to reports of a boat capsized at Smitswinkel Bay.

The sea rescue craft Spirit of Safmarine III was diverted to respond.

On arrival on the scene it was confirmed that 5 men from the boat Albatross, that capsized, had been rescued from the water by the crew aboard the boat Getavis and they were all safe and not injured.

It appears that the men were fishing at anchor when anchor rope may have fouled on rocks and reportedly while recovering the rope their boat capsized. 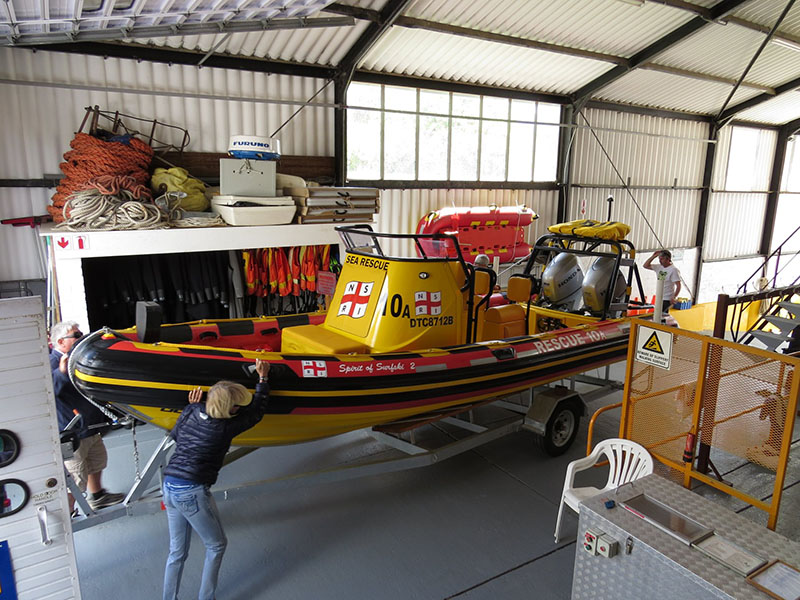