Skip to content
SEA RESCUE – National – 10th and 11th October. 2 girls and their dog assisted, George. Kayak found adrift, Port Alfred. Fishing boat monitored, Mossel Bay. Motor Vessel assisted, Table Bay:
WILDERNESS:
Torsten Henschel, NSRI Wilderness deputy station commander, said:
At 13h47 on Saturday the 10th of October, while training at Glenwood House School swimming pool, NSRI Wilderness were alerted by WC Government Health EMS requesting assistance at the George Dam where two 12 year old girls and their Jack Russel had launched a small inflatable boat but were blown across the dam in strong winds. They landed on an island in the centre of the dam, 200 meters from mainland, and their boat deflated from a puncture.
The girls had waved for help and eye-witnesses who noticed them as well as their parents who had arrived to look for the girls, raised the alarm calling George Fire and Rescue Services and EMS.
On arrival on the scene EMS called NSRI requesting assistance and we abandoned our training exercise and responded to the scene with our sea rescue craft OSCAR’s RESCUE.
The girls were in no immediate danger and were commended for not trying to swim across the dam to the mainland.
We launched our sea rescue craft and brought them and their dog to mainland where they were reunited with family and their inflatable boat was recovered and no further assistance was required.
MOSSEL BAY:
Andre Fraser, NSRI Mossel Bay station commander, said:
At 09h09 on Saturday the 10th of October, NSRI Mossel Bay duty crew were placed on alert following a distress call to Telkom Maritime Radio services from a fishing boat SUN DANCER reporting to be taking water off Mossel Bay.
While information was gathered the FA Platform rig were able to establish communications with the casualty vessel and it was determined that they were 6 nautical miles from their position which is 80 nautical miles off-shore.
The FA Platform service tug was dispatched from the FA Platform rig to the position and on arrival found the crew safe but in heavy seas, with the stern low in the water. They were being hammered by rough sea conditions and the FA Platform tug remained by her as a safety precaution.
Weather improved and the casualty vessel was able to make progress without further assistance and we remained on alert until she arrived safely in Mossel Bay harbour in the early hours of Sunday.
TABLE BAY:
Pat van Eyssen, NSRI Table Bay station commander, said:
On Sunday, 11th October, at 16h04, NSRI Table Bay were activated by the Transnet National Ports Authority (TNPA) following a request for assistance from the 52 foot Motor Vessel IBIS reporting to have motor failure with 4 crew onboard. They had anchored off Granger Bay and were in need of assistance.
We launched our sea rescue craft SPIRIT OF VODACOM and on arrival on the scene a towline was rigged and we towed them safely into Table Bay Port where an NSRI volunteer, an engineer, was able to get their motor started but it continued to cut out and we assisted to tow them to a berth at the Cape Grace dock where they required no further assistance. 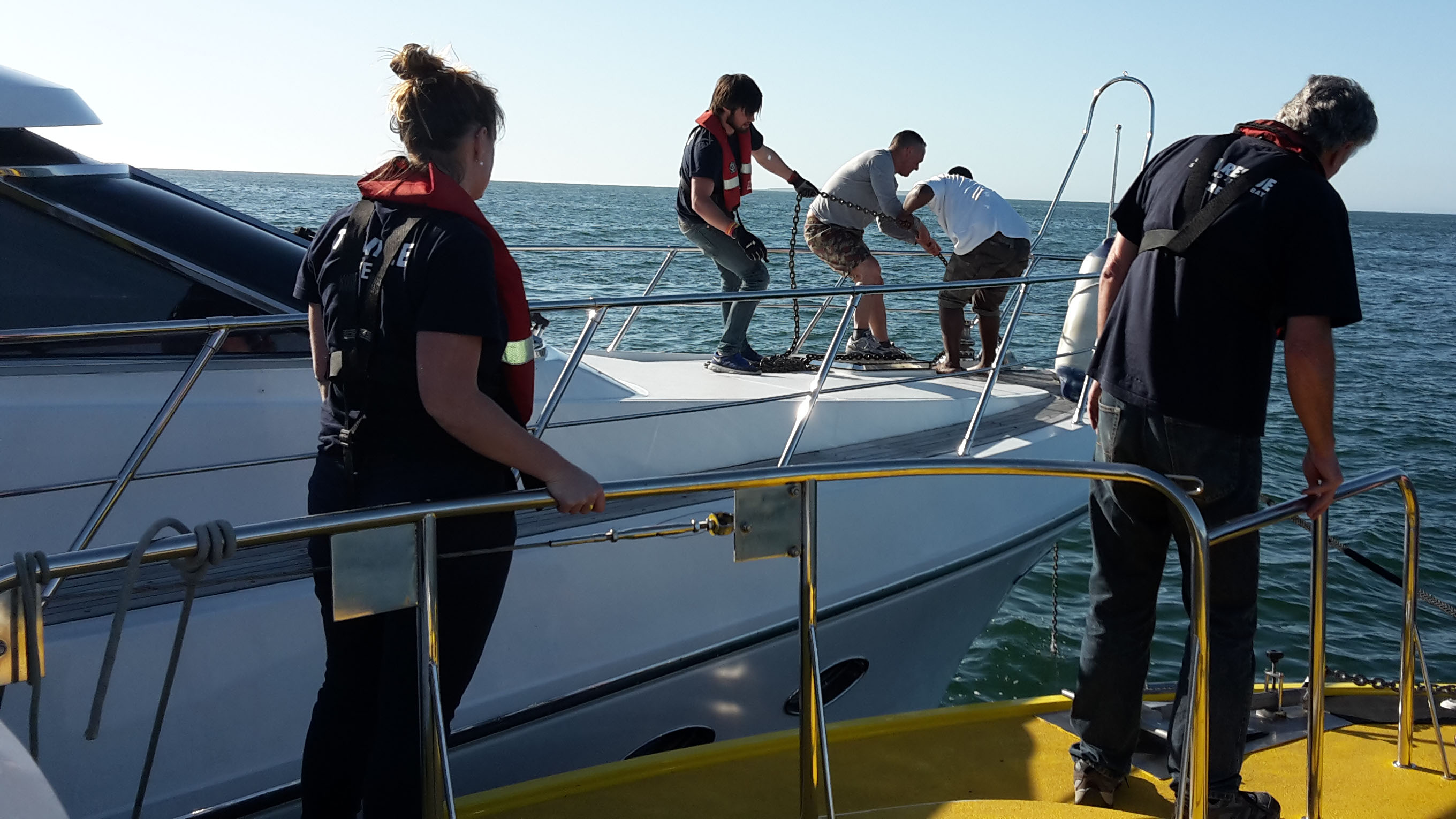 PORT ALFRED:
Juan Pretorius, NSRI Port Alfred station commander, said:
At 07h52 on Sunday the 11th of October, NSRI Port Alfred duty crew were activated following reports of a sea-kayak seen floating unmanned off East Beach, Port Alfred.
Eye-witnesses reported seeing an unidentified object floating in the water nearby to the sea kayak but could not make out what the object was.
We launched our sea rescue craft RESCUE 11 ALPHA and on arrival on the scene a blue Legend double sea-kayak was recovered and brought ashore. The unidentified objects floating nearby was only ocean debris.
It is suspected that the kayak may have been blown out to sea in strong winds and no persons have been reported missing or overdue.
A photo of the sea-kayak is below and the owner can contact sea rescue to have it returned.
-ENDS-
TO REPORT A SEA RESCUE EMERGENCY DIAL 112 FROM A CELLPHONE
SMS 32287 with your name and a message of support for our Sea Rescue crew 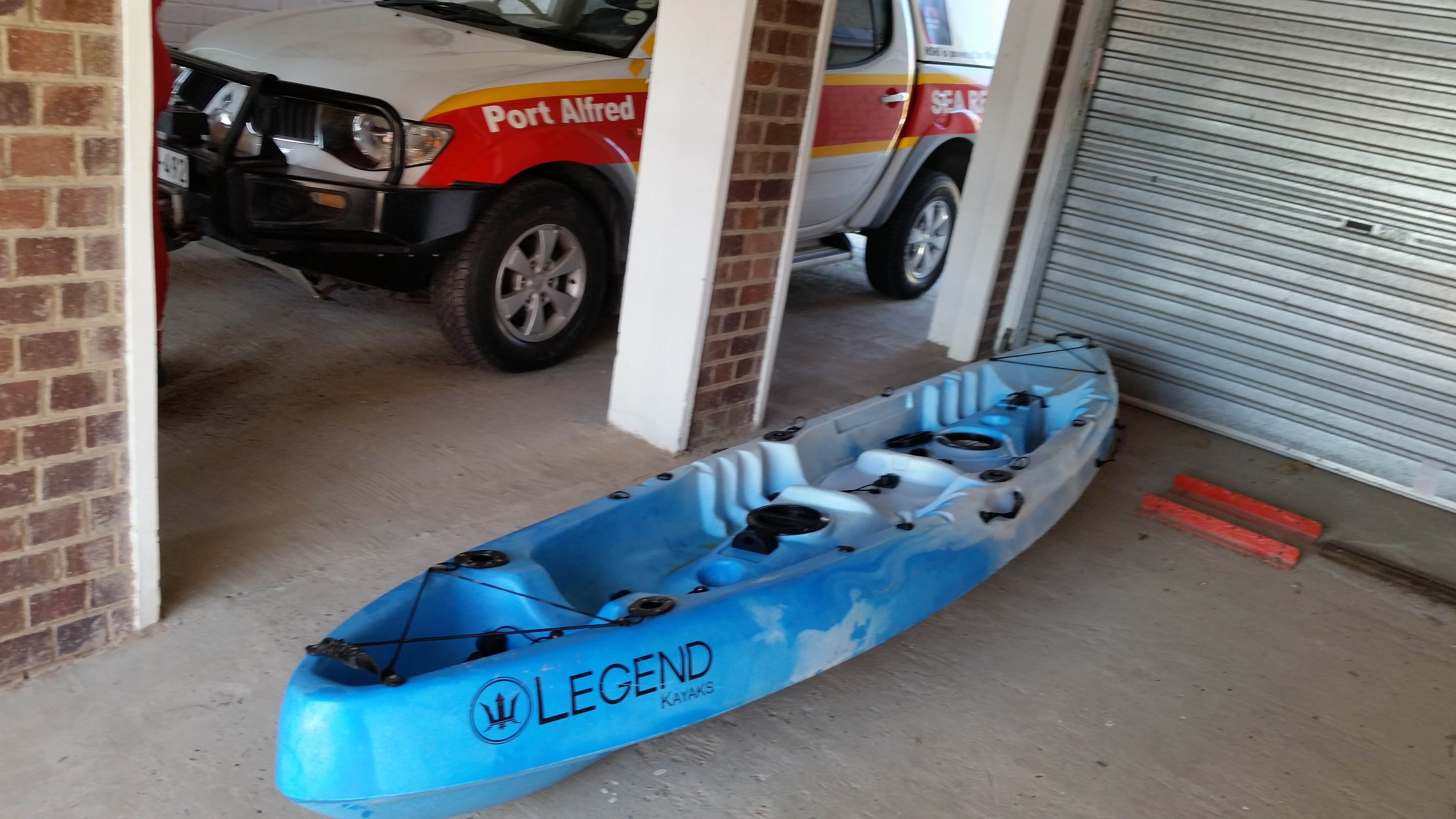