You can watch this video on YouTube by clicking here. 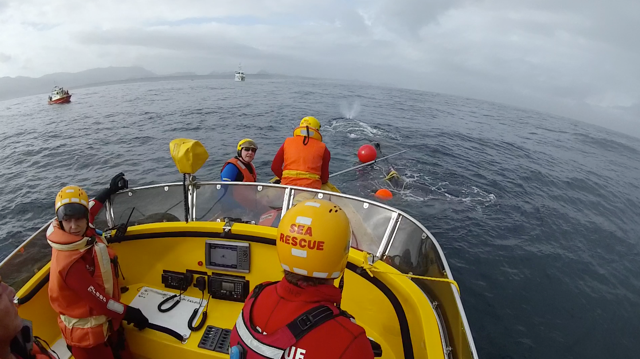 The Department of Sea Fisheries Ellen Khuzwayo research vessel was on-scene. She is conducting rock lobster research in the area and it appears that the whale was entangled in rope and buoys from the research being conducted.

“A complication was presented with the rope itself being almost 20 millimetres thick meaning that the specialised cutting equipment would be tested to their limit”, said Mike Meyer of the Department of Environmental Affairs – Oceans and Coasts and head of SAWDN.

“Because of the thick rope it took two SAWDN volunteers to pull on the cutting poles at the same time while cutting on each wrap and causing one pole to be damaged beyond repair from the weight of the rope and from the effort required to cut through the 20 millimetre thick rope but incredibly satisfying to achieve the successful outcome”, said Mike.

The whale was followed for a while by the SAWDN team and it appeared healthy, strong and confident and despite some damage to the whale’s tail stock, caused by the rope, SAWDN are very confident that the whale has been saved. 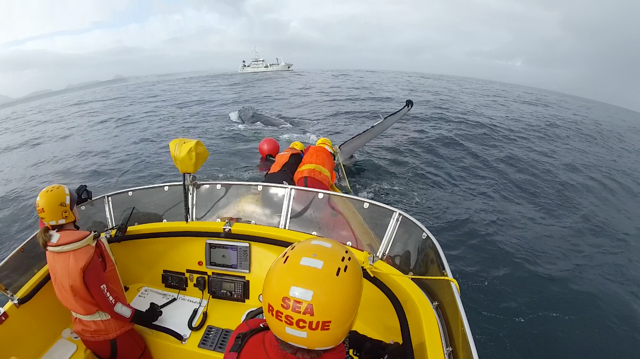 THE SOUTH AFRICAN WHALE DISENTANGLEMENT NETWORK IS A VOLUNTEER NETWORK THAT BEGAN IN 2006 MADE UP OF VOLUNTEERS FROM THE DEPARTMENT OF ENVIRONMENT – OCEANS AND COASTS, NSRI, TELKOM MARITIME RADIO SERVICES, THE DOLPHIN ACTION AND PROTECTION GROUP, SA NATIONAL PARKS, THE SA POLICE SERVICES, RESEARCH ORGANISATIONS, THE NATAL SHARKS BOARD, TABLE MOUNTAIN NATIONAL PARKS, WEST COAST WILDLIFE RESCUE AND A HOST OF VARIOUS MARINE AND ENVIRONMENTAL GROUPS.