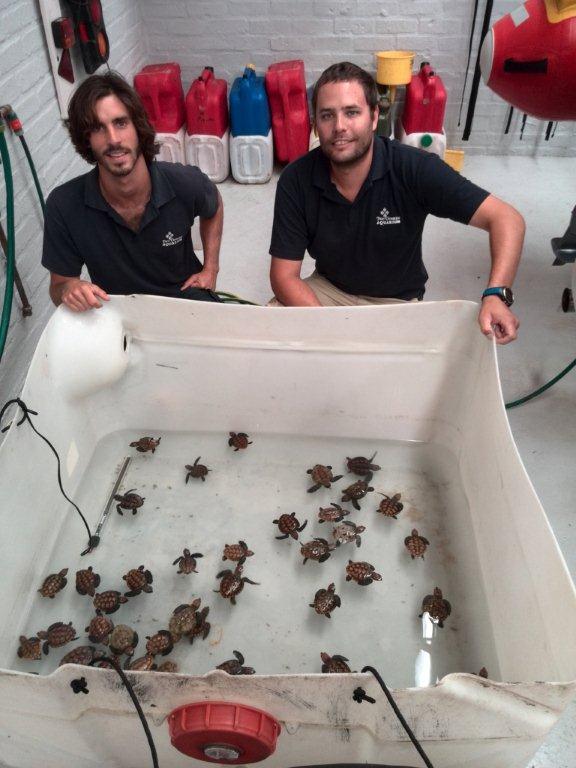 Since early this week NSRI Agulhas volunteers, assisting Cape Nature and SA National Parks, have been involved in the collection of baby Loggerhead Turtles that have been washing ashore along the Struisbaai and Agulhas coastline.

It appears that these turtles breed in the Kwa-Zulu Natal area. From what we understand, they swim into the Agulhas currents and drift Southwards. The Agulhas currents then loop heading Northwards again and under normal circumstances the little turtles return to their Kwa-Zulu Natal home naturally in these sea currents; but a strong South Easterly wind and sea conditions have resulted in some being swept ashore, they can’t survive in the colder Cape waters and end up beaching along the coastline.

This natural phenomenon could continue for anything from a few days to around the next 10 days.

NSRI Agulhas, the Overberg Disaster Management, Cape Nature and SA National Parks in the areas around the Struisbaai coastline started early in the week getting enquiries and deliveries of the turtles found on the beach by residents.

Parks rangers have been patrolling the coastline in a search and rescue operation for these turtles beaching (beaching to escape the cold waters).

Two Oceans Aquarium dispatched staff to Struisbaai to assist in the rehabilitation of the turtles and an incubator tank has been set up at NSRI Agulhas and is being manned by volunteers from the Two Oceans Aquarium, NSRI Agulhas, Cape Nature and SA National Park rangers, Overberg Disaster Management and the Overberg Department of Environmental Affairs.

So far 38 turtles have been collected and are undergoing a rehabilitation and rehydration process at the NSRI Agulhas base in Struisbaai under the guidance of The Two Oceans Aquarium.

An alert has been put out to anyone coming across these baby turtles washed up on the beach in this area they can call NSRI Agulhas at 028 4357777 or the Two Oceans Aquarium at 021 4183823 or bring the turtles to the NSRI sea rescue base in Struisbaai.

Click here to learn more about what you can do should you come across a marine turtle stranded on the beaches around Cape Town.

Please note: This advice is only valid for marine turtle strandings around the Western Cape. Should you come across a turtle elsewhere around the South African coast, please contact your local aquarium or animal rehabilitation centre.

TO REPORT A SEA RESCUE EMERGENCY DIAL 112 FROM A CELLPHONE.