An NSRI Port Alfred volunteer who is also a boat mechanic was taken along and spare parts were purchased from from a local shop before sea rescue launched.

On arrival on-scene the boat mechanic was put aboard the yacht and after about 15 minutes the problem, a snapped fuel line, was fixed.

The 4 man yacht crew are from Richards Bay, George, Paarl and Somerset West and 3 are aged in their 50’s and one a 66 year old and they are delivering the yacht for the owner.

They have continued on their voyage and the NSRI sea rescue craft arrived back at base at 21h15. 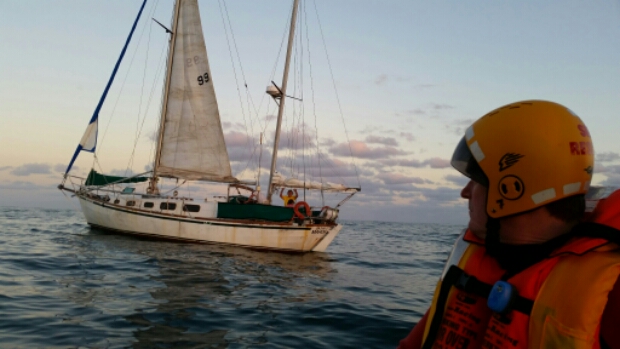 They were 6.5 nautical miles from Hout Bay and were being towed by a fellow boat GT after suffering motor mechanical failure but now needing assistance as the boat towing them was the same size boat making a tow effort difficult.

On arrival on-scene an NSRI rescue swimmer was put put into the water to rig a towline and he then remained on the casualty boat  and the NSRI sea rescue craft towed them safely to Hout Bay harbour without incident arriving in Hout Bay harbour at 23h00 and once safely in the harbour no further assistance was required.