On Saturday 5th July, Station 5 Durban received a call about a fishing missing at Albert Falls.  Despite the distance, we responded.  On the way there we heard the good news that Ken had been found and was en route to hospital. 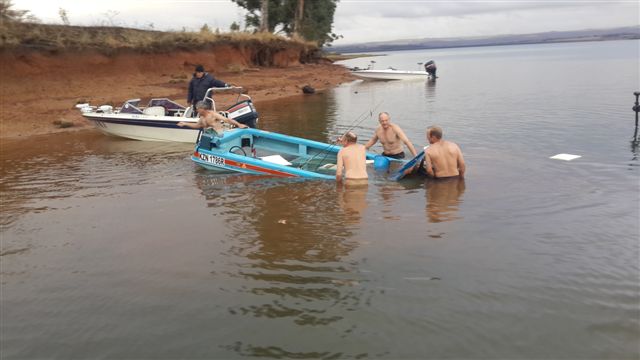 Ken Ainslie came down to our training meeting in Durban last night, to meet the crew and share his story…

It had been a great day with calm waters, no wind and bright sunshine.  I was fishing with my electric boat, had just but in a new 100 Ah AGM battery that morning. We were at the trees in the middle of the dam with two other boats from major bass concentrating on my fish finder, which showed promising fishing spots below. Harry and Gill Adamson sped off in the direction of the camp site and, on looking towards the dam wall, I saw what looked like a heavy grey cloud.  I suddenly recalled the weather report of approaching storms in the late afternoon.  Immediately I stopped fishing and followed Harry and Gill.  I could clearly see their boat Rooster in the distance.  On leaving the trees in calm flat water I made good speed towards the campsite.  Approximately half way across the dam I saw what I can only describe as a frightening sight.  Huge waves being pushed towards me by gale force winds.  I only had to encounter two or three of these huge waves before realising carrying on was not an option, I attempted to turn around and before I could get underway a huge wave hit me from behind and completely swamped the boat.  The huge weight of water in the boat was just too much and down we went.  The boat rolled over and I dived into the water to get clear of the overturning craft.

Grabbing hold of the trailering eye hook on the front of the boat, a miserable small ring only large enough to hang on with one finger, the back of the boat was low underwater due to the weight of the motor and batteries, a sickening sight was watching my tackle and gear being washed past me by the huge waves.  But my immediate problem was watching the waves as they were breaking over my head.  I had to regulate my breathing as taking a gulp of water whilst under water would have been the end this sickening situation. I continued, for what seemed forever, alternating fingers in the boat eye to give each finger a rest.  I cursed the boat eye was not bigger but was glad that I have strong hands from my type of work.  I wondered how long the storm would last and hoped it would be over soon.  From what I could judge the boat was being pushed by the waves, ever so slowly, in the direction of muddy banks and wondered how long this would take.  At no time did I panic or think of giving up.  But spent my time thinking what I could do to improve my situation.

I considered swimming to the back of the boat and trying to lie on top of the boat but the wave action would have washed me off – so that thought was  abandoned.  I tried to use my cell phone in my jacket pocket without much hope.  It was dead!  I don’t know why but i put it back in my pocket.  After approximately an hour I started to feel cold as the water temp was a cold 16 C.  The odd cramps started in my legs so I concentrated on kicking, using the kicking action to try and move the boat towards the banks.  This seemed to improve the cramping but I was getting colder by the minute.

I was only wearing my heavy jacket and denim shorts and wondered if the jacket covering was helping me or just a dead weight.  I gave up the idea of taking off the jacket – I reasoned that the small amount of water between the jacket and myself was helping to retain my body heat.

Strangely I felt very thirsty so had a few gulps of water which made me feel better. I even thought of the e coli in the water, so strange the thoughts that ran through my mind.  I thought of Bear Grill on the TV program and felt like saying to him now what would you do!!  I thought of my fishing friends who I imagined were around the warm camp fire enjoying a drink.  I also wondered how long before they were able to try and look for me – also realising they would have to wait until the storm subsided before they could set out.

Another hour had gone by and it was very dark.  I was very cold.  The muddy bank skyline was just vaguely visible and i could make out the two tallest trees but I still thought too far to swim in my cold condition.  I was a Provincial swimming champion in my younger days, so the swimming was not a problem but the thought of cramping was a real issue.  I thought staying with the boat was my best choice.

The wave action had died down somewhat and my heart leapt as I saw a boat travelling across the dam shining a torch.  They were about 200m away.  I did not shout as I knew they could not hear me, but waved my free arm as high as I could.  What a sinking feeling watching them speed away to Kayalami Bay as I heard later.

It was about this time I had got about 200m to muddy banks and since the boat was taking forever to move any closer, I decided to swim for it before I got any weaker.

What a terrible feeling letting go of the boat !

I don’t remember how long i swam for but I remembered touching the shore with my feet.  What a relief.  I could have cried.

My elation was short lived as I realised my cold, numb legs wouldn’t work.  I stumbled and fell several times, cutting and scraping my legs, not feeling anything because they were so cold.  The wind, now, was cooling my weakened body even further.  I crawled to the bank wall and tried to stand, holding on to the roots protruding from the wall.  I knew the bank sloped more gradually further along and was trying to make my way to this point.  I thought my only hope was to walk to the farm house and look for help.

An unrealistic thought as it was a long way away and hyperthermia was setting in.  I tried to wave my arms and stamp my feet to improve circulation and body temperature.  Ii don’t think it helped very much.

I was crawling on all fours half way up the bank when I saw a light waving from the water.  It was my friends Kobus and Ian from Major Bass.  That’s when I screamed like a mad man.

A torch shone in my direction and then fixed on me.  Hell, it was good to see Kobus and Ian.  I was saved.  I cannot explain what a great feeling of relief I felt.

They carried me down to their boat where they stripped off my jacket and wrapped me in a blanket, phoning Alex at the camp site informing them that I was found.  Ian made good time getting me back where I was bundled into Alex’s car and sped off to Greys Hospital at break neck speed.  This part of the rescue was a blur to me as hyperthermia played its part.

At the hospital I was given first class treatment and, as I heard later, was close to losing my battle to the cold.  I was slowly warmed in a heat fan type blanket.  Given a drip, ECG and x-rays.  After some 6 hours of treatment I was given the all clear.

I was keen to get back to my tent for a good rest.  In the morning after a welcome cup of coffee and borrowing some dry clothes I heard the good news that my Major Bass colleagues had found my boat, turned it over and bailed out the water and gathered a lot of my kit that had been washed up on the banks.  They then towed the boat back.  I was overjoyed to see my boat – we have been together too long to be apart!!

Yes, at 74 years of age, an expensive and painful lesson!

After 40 odd years of boating, I hope it will never happen again.  My mistake was under estimating the huge storm building up in the middle of the dam.

To all my Major Bass friends and colleagues I owe you a great debt and I thank you all for your support and help when i needed it.  I know we all will be a lot more careful in future see you all at the next fish off.”