This international day has become an annual event on the lower South Coast celebrated by all those who work and play in and around the ocean.

This year Station 20 launched their new 7.3m rescue boat, Spirit of Dawn, the 5.5m Caltex Challenger II and the waverunner, 20 Delta. Station 32 travelled by road from Port Edward to Shelly Beach where they launched their waverunner, Discovery 6.

The sea rescue vessels rendezvoused off the backline at St Mike’s Beach with dive boats, commercial recreation boats, lifeguards, surfers, body boarders as well as a number of ski-boats and jet skis.

A large group of dolphins cruised past as flowers were strewn in the ocean and all pledged to protect and conserve the marine environment.

The Port Edward crew had to cut short their participation to answer a call-out to Palm Beach where a juvenile whale had washed up onto the beach.

Meanwhile back at the rescue base the shore crew hosted a group of special needs children with their parents and teachers. They were given a tour of the base and a short talk on what the NSRI does.

Beulah Mauz of African Dive Adventures, one of the co-ordinators of the celebration, thanked the NSRI for its participation.

“This is the second time that such an event has been held here and it is growing in popularity. Sea Rescue’s presence is sincerely appreciated”, she said.

“It was a good opportunity for us to interact with other ocean users and to have had the crew from Station 32 join us made it just that little bit more special”, Duty Coxswain, Jerry Jackson, said after all the vessels had returned safely to the beach.

“Overall, it was a good day with great spirit”, he added. 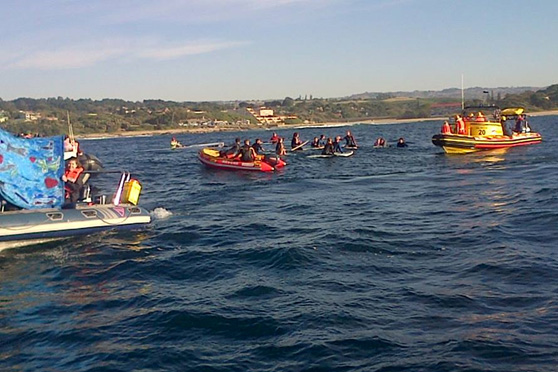