A sudden strong South Easterly wind had picked up during the sailing regattas and a large number of boats were being swept off course.

The event has excellent safety measures and support boats in place and while their safety boats rounded up the “casualty” sailing dinghies as a precautionary safety measure they requested NSRI Simon’s Town to activate to assist.

Before NSRI Simon’s Town could reach the scene the event organisers confirmed that their safety boats had rounded up all “casualty” sailing dinghies and no further assistance was required and no injuries had been sustained and later sailing regattas continued without incident.

Community members had raised the alarm after the boat had failed to return as scheduled from fishing and communication with the two fishermen onboard could not be established.

Police joined in the search but on arrival in Lamberts Bay, due to dense fog, the sea rescue craft were not launched to initiate a sea search. Rescuers continued attempts to establish communications with the fishermen and a possible search area was identified based on the known fishing grounds the men would have been in. It was strongly suspected that the fishermen were waiting out the dense fog before returning to shore.

Arrangements were made to launch a sea search from first light and later, at 23h00, a red distress flare, sighted by eye-witnesses from Britannia Bay, was investigated with the possibility that the red distress flare may have been related to the two missing fishermen.

Based on the sighting of the red distress flares from eye-witnesses at Britannia Bay a sea rescue craft was launched at St Helena Bay but an extensive sea search until after midnight in the vicinity of the witnessed red distress flare revealed no sign of any craft or persons in distress.

This morning, Monday the 21st of April, NSRI Mykonos launched their deep-sea rescue craft to continue a search in Lamberts Bay while a sea rescue rigid inflatable craft was towed to Lamberts Bay to be launched. As the search gained momentum Police at Strandfontein, on the west Coast, confirmed that the two fishermen had reached the shore at Strandfontein and were safe and not injured. 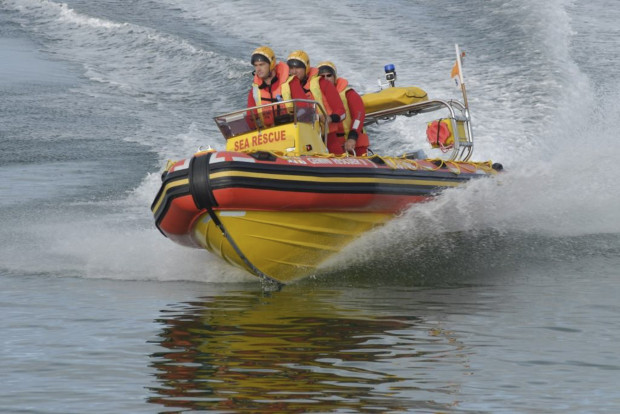