MRCC (Maritime Rescue Coordination Centre) are commended for speedily activating resources to respond to multiple incidents during the Cape to Rio yacht race. Yachts were affected by severe weather during the early stages of the Cape to Rio 2014 yacht race that began on Saturday, 04th January, from Table Bay.

A JOC (Joint Operations Control) was set up at MRCC, and included Rio Race Control, NSRI and MRCC, to coordinate the joint rescue and assistance operation.

MRCC, the Transnet National Ports Authority, Telkom Maritime Radio Services, the SA Navy, the SA Air Force 22 squadron and 35 Squadron, NSRI’s Table Bay, Mykonos and Airborne Sea Rescue Unit, and Rio Race Control played a vital role and ships at sea in the vicinity at the time that have diverted to lend assistance are commended.

The current status from the JOC at MRCC is as follows:

Current situation as follows at the MRCC JOC:

1. Yacht Indaba returning to Cape Town under sail with a crew person sustained a medical injury aboard and in a stable condition being monitored by the JOC.

2. Yacht AVA has been found, following a search, and her crew are okay. She is sailing back to Cape Town under her own sail.

3. Yacht BILLE has had all crew evacuated to the SA Navy ship SAS Isandlwana and the yacht is adrift at sea waiting a tow by FV Allison chartered by Owner. The body of the deceased is in the care of the SAS ISANDLWANA.

4. Yacht ISLA had a fire aboard last night and is now under tow by Smit Madura, a salvage vessel that was dispatched by MRCC, and they are heading back to Cape Town.

5. Yacht BLACK CAT is under tow by NSRI Table Bay’s SPIRIT OF VODACOM and returning to Cape Town.

6. Yacht AVANTI is sailing to Saldhana Bay and will probably withdraw from the race.

7. Yacht AVOCET is sailing back to CT and will probably withdraw from the race.

8. Yacht DO DO, just south of AVA at present, is also returning to Cape Town under sail. She had torn sails and experienced steering problems but SAS Isandlwana reports she has confirmed all OK at present. NSRI Hout Bay is on standby in case she needs assistance. Isandlwana will return to BILLE to await FV Allison subject to any further tasking.

9.  A non Cape to Rio participant, the yacht IDEFIX2, with 2 Crew aboard has reported to be disabled and adrift 216 Nautical Miles West of Saldhana Bay and she has declared an emergency. They are unable to sail or motor and are using remaining fuel to keep batteries charged for radio. MRCC has despatched a bulk carrier to investigate and then to report back to MRCC for further action required.

10.  SAAF Dakota, 35 Squadron, at Air Force Base Ysterplaat has stood down at present, her crew remain on alert and available if required. NSRI Airborne Sea Rescue Unit remain on alert.

NSRI Table Bay launched the sea rescue craft SPIRIT OF VODACOM, just before 09h00 on Monday the 6th of January to respond to rendezvous with the Cape to Rio yacht BLACK CAT 75 nautical miles off-shore of Cape Town.

BLACK CAT, with four persons on board, are adrift at sea suffering rudder damage and are unable to sail. All crew of BLACK CAT are reported to be safe, not injured and in no immediate danger.

NSRI Table Bay were activated this morning by the Transnet National Ports Authority following a request by MRCC (Maritime Rescue Coordination Centre) who are coordinating multiple rescue and assistance operations for the Cape to Rio yachts affected by weather during the early stage of the Cape to Rio yacht race.

The intention is to render assistance and to tow the yacht back to Port in Cape Town. 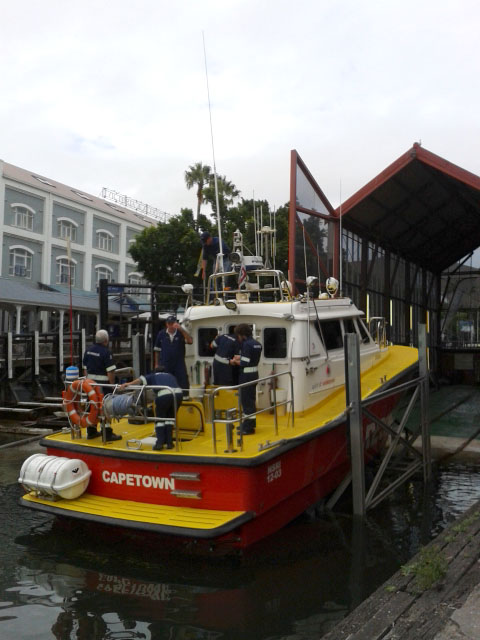 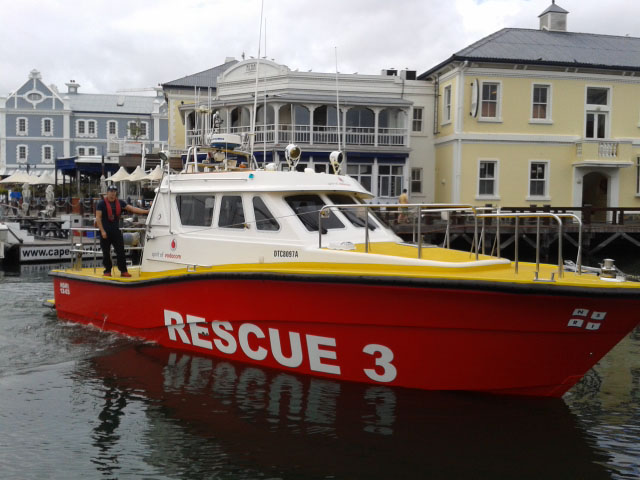