This morning, Wednesday, 25th September, NSRI were informed by Police that they were responding to between Meerensee and Hawston where an angler had happened upon a body of a man on the beach.

Police located and recovered the body of a man believed to be that of the remaining missing man from the incident off-shore of Kleinmond on Monday 23rd September.

The body of the man has been handed into the care of the Forensic Pathology Services and Police are arranging with family members for positive identification of the deceased.

BODY OF ONE MISSING MAN LOCATED AND RECOVERED:

At 09h45, Tuesday, 24th September, NSRI Hermanus responded to Kleinmond to assist Police following reports from fishermen at sea of a body located floating at sea 2.5 nautical miles off-shore between Kleinmond and Hawston.

NSRI Hermanus volunteer sea rescue duty crew launched their sea rescue craft LE JENMAR II and on arrival on-scene, at 10h30, located and recovered the body of a man believed to be that of one of two missing men from yesterdays incident off-shore of Kleinmond (original media release below).

The body of the man was brought to Kleinmond harbour where the body has been handed into the care of Police and the Forensic Pathology Services.

Positive identification of the recovered body is being arranged with family members by Police.

At 15h31 on Monday the 23rd of September Hermanus duty crew were activated by the Transnet National Ports Authority following eye-witness reports of red distress flares sighted deep-sea off-shore of Kleinmond, between Hermanus and Gordons Bay.

“With no reports of anyone missing or overdue investigations were initiated to search for abandoned vehicles and boat trailers along the coastline (that could possibly be related to the distress flares) while sea rescue craft responded to initiate a search in the vicinity of where eye-witnesses had reporting seeing the red distress flares.

“A sea search pattern commenced 5 nautical miles off-shore of Hangklip and Kleinmond and the search followed a sweeping line search gradually moving towards the shoreline.

“Then at 17h00 a boat trailer and vehicle were found at the Hangklip slip way and details found on the boat trailer referred rescuers to the fishing boat ARALDA III but all attempts to reach these contact cellphone numbers failed and it was suspected that this vessel, now also reportedly overdue from fishing, may be the vessel related to the red distress flares.

“Friends of ARALDA III confirmed to NSRI where their normal fishing grounds were and this information tied in with the sea search that was already underway in that vicinity.

“With dusk approaching the WC Government Health EMS activated the Red Cross AMS Skymed helicopter to join in the search in order to make best use of the remaining daylight.

“At 18h42 both the deep sea rescue craft and NSRI coast watchers that were posted along the Kleinmond and Hangklip shoreline spotted a hand held red distress flare 3 nautical miles off-shore of Kleinmond.

“Our sea rescue craft SOUTH STAR was near to the flare at the time and on arriving at the flare 4 men were found clinging to the upturned hull of the capsized boat ARALDA III and all 4 men were rescued onto our sea rescue craft and brought to shore at Kleinmond slip-way where we were met by Fire and Rescue Services, our NSRI shore crews and Police and the men were treated for exhaustion and hypothermia.

“WC Government Health EMS ambulances were summoned to the scene but all four men refused to be taken to hospital.

“The skipper confirmed that two of his crew are still missing at sea. (All onboard had been wearing life-jackets). No sign of the two missing men had been found during the sea search.

“The rescued men, skipper Phillip Schoeman, 53, his son Phillip, 27, Alwyn du Plooy, 41, all from the Strand, and Joe Williams, 61, from Brackenfell, reported that they had launched at Hangklip and while fishing they had capsized at 10h00 (it appears that they may have capsized as a result of the anchor rope fouling in the motors but this cannot be confirmed pending investigations) and they had set off a total of 10 red distress flares. (Sightings of red distress flares were first reported to NSRI at 15h30). Their cellphones and radio communications had been lost when their boat capsized. As night fell they set off their last hand held red distress flare and that was seen by rescuers.

“According to the skipper earlier in the day one of his crewmen, a 55 year old male, from Strand, had left the capsized boat to try to swim ashore (at the time they were approximately 3 nautical miles off-shore of Kleinmond) and then later in the day one of his crewman, a 54 year old man from Strand, had slipped away from the upturned boat and he had drifted away from the boat. He had appeared to the others to be deceased at the time and it is suspected that he may have succumbed to hypothermia. Both of these men remain missing at sea.

“Police are investigating and will continue searching for the two missing men. The Police Dive Unit has been informed.

“The names of the two missing men are not being released while efforts are underway to trace family members.” 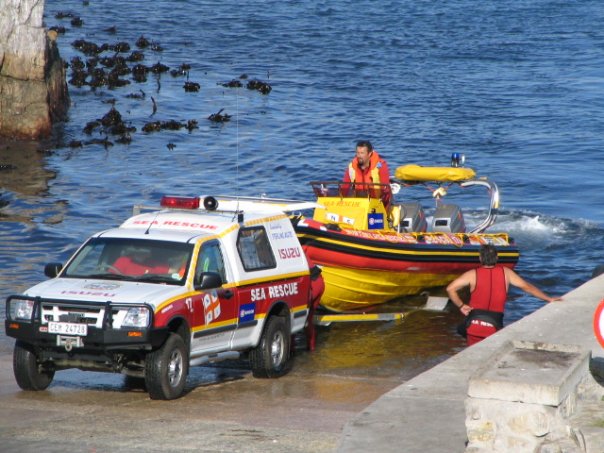