Both fishermen that have been missing since Wednesday afternoon, the 1st of May, were found by a passing fishing boat ADAMAS near to Saldanha Bay at approximately 15h00 today (03 May). The skipper of ADAMAS is Anton Ferreira.

They were rescued onto the fishing boat and brought safely to Saldanha Bay harbour where they were met by Christy’s wife Brenda Jordaan, family members, Sea Rescue Mykonos volunteers, SA Paramedic Services, SA Police Services, Transnet National Ports Authority officials and hundreds of well wishers, mostly local fishermen and harbour employees – they were met by a chorus of loud cheers from the well wishers.

Christy Jordaan, 59, and his son Brandon 36, are in good spirits after enduring two nights and almost three days adrift in rough seas off the West Coast. They are being transported to hospital as a precautionary measure, although both are well, Christy is presenting with high blood pressure and both men are exhausted and dehydrated but they are in the good care of paramedics in the SA Paramedic Services ambulance and accompanied in the ambulance by Brenda and a NSRI Mykonos volunteer and are en route to hospital.

They had lost engine power and were adrift in thick fog when they raised the alarm on Wednesday afternoon (01 May). They had warm clothing and life-jackets. They had expended all of their red distress flares on their first night adrift which had gone off unseen and their cellphone battery died on Thursday morning at around 09h00.

Based on their originally estimated position the search, and having covered the area off Paternoster, the search had shifted northwards, following natural drift patterns. Today the search reached as far as Lamberts Bay and up to 20 nautical miles off-shore.

The two men were found further South off Saldanha Bay by chance by a passing fishing boat that was not involved in the search. It is suspected that in the fog conditions they may have wandered way out of the area that they considered themselves to have been in possibly leading to the North Westerly winds bringing them in with a storm pushing them southward.

They were found 2 nautical miles off Saldanha Bay but slow progress was made in the rough seas by the fishing boat ADAMAS after rescuing the two men and they arrived in Saldanha Bay harbour at approximately 17h00.

Their boat was towed to Saldanha Bay harbour by ADAMAS.

All sea rescue resources are returning to base. 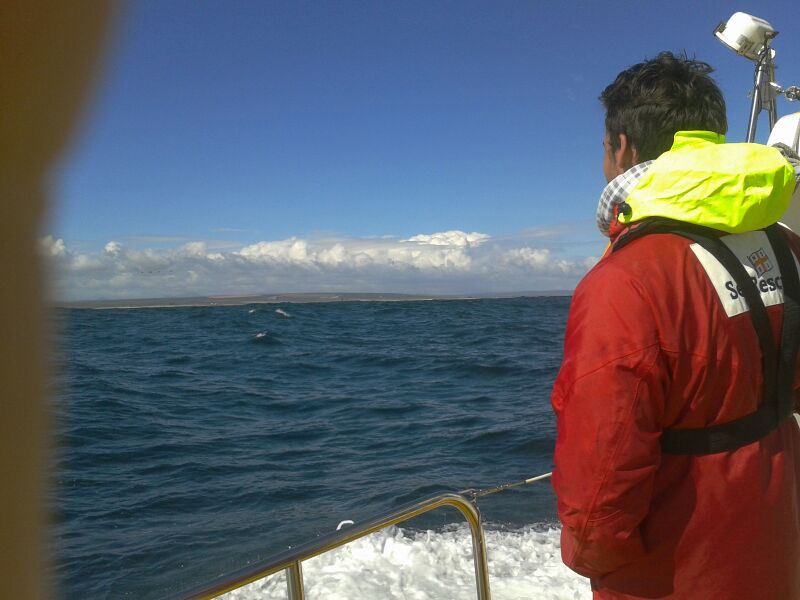 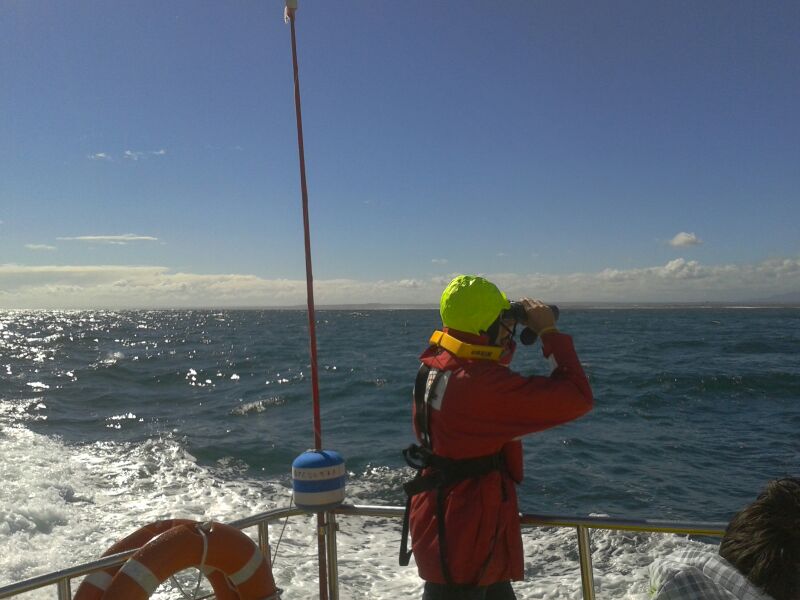 The two fishermen missing at sea on a small boat have not been found despite an ongoing large search and rescue operation.

From first light this morning the NSRI Mykonos sea rescue boat, a Police boat, a Police helicopter and NSRI and Police shore patrols continued in the search.
By midday today, after still no sign of the two men could be found, an SA Air Force Dakota fixed wing aircraft joined in the search due to a temporary reprieve in dense fog.

Rough seas are forecast to begin by early this afternoon in that area, and ongoing dense fog conditions prevail with swells having increased to 5 meters.

This afternoon NSRI Yzerfontein dispatched fresh crew to relieve the NSRI Mykonos crew and NSRI Table Bay has dispatched a deep sea rescue craft to join in the search which will continue through tonight.

Cellphone reception with the two men was lost at approximately 09h00 today. We suspect their cellphone battery has been exhausted.

It is strongly suspected that the two fishermen may have already been well out of the area they believed they were in when the search initially commenced in dense fog conditions yesterday.

Today dense fog lifted in pockets for a period during the afternoon and despite the Air Force Dakota aircraft making best use of the temporary clearer skies no sign of the two men on their boat could be traced.

The search is ongoing and will continue through the night.

At 14h55 on Wednesday the 1st of May, Mykonos duty crew were called out for a fishing boat with two fishermen on board that had lost motor power and was adrift at sea in dense fog in the vicinity of Paternoster on the West Coast.

“By 22h00 last night,1 May, no sign of the fishermen had been found despite an extensive search and having cellphone contact with the men.

“Dressed warmly and with life-jackets the men were instructed to anchor and deploy drogues to reduce drift and the search resumed at first light today, Thursday, 02 May.

“The search is ongoing, they are suspected to have drifted further North. Both men are in good spirits but dense fog continues to hamper the search.”