02h00 – South African time, Thursday, 18th April, Family and friends of Brett Archibald are overjoyed by news that Brett has been found alive and well, although sunburnt and dehydrated, after almost 27 hours adrift at sea without a life-jacket after going missing overboard from a boat in Indonesia while on a surfing trip at the Mentawai Islands (a chain of seventy islands off the Western coast of Sumatra, Indonesia).

Brett had been sea sick on the boat NAGA LAUT and at around 05h00 (INDONESIAN TIME on Wednesday 17th April) he had disappeared overboard in rough seas about 20 nautical miles from land.

After a massive search and rescue effort he was found drifting at sea by the surf charter motor sail yacht BARRENJOEY (an Australian surf charter boat and crew) at around 06h30 (Indonesian time – shortly after sunrise) (about 00h30 South African time), 12 nautical miles East of Sipura Island.

NAGA LAUT, the boat he had gone missing from, raced to rendezvous with BARRENJOEY at sea but not before Brett’s wife, Anita, and family were contacted with the good news.

Brett will be taken to Padang, West Sumatra, aboard NAGA LAUT to be assessed medically and if his medical condition requires he will be airlifted to hospital in Singapore.

Sincerest gratitude is extended by Bretts wife Anita Archibald and the family and friends of Brett to the crew of the motor sail boat BARRENJOEY and to all Indonesian maritime rescue services, Australian and United Kingdom maritime rescue and the private volunteers who assisted and who were involved in the search and rescue operation that brought this effort to a successful conclusion and to the hundreds of people on the facebook page ‘Searching for Brett Archibald’ who expressed hope and strength.

The first message of good news came to Anita at around 01h30 (South African time) in an SMS message from a Chantelle which read: “barrenjoey mcgroder. And barrenjoey surf charters. John, Belinda and crew Doris and their two sons Finn and Duke (5 + 8 years old) – who also had their binoculars out as well – found Brett.”

Anita spoke to Brett for the first time by phone at around 04h15 South African time.
Brett told her he had been extremely sea sick and may have passed out on the deck of NAGA LAUT while being sea-sick overboard when he woke up already in the sea behind the boat which continued away from him. No one onboard NAGA LAUT knew he had gone overboard.
He said he came close to drowning at least 8 times during his 27 hour ordeal while swimming and drifting at sea and that he had been stung by jelly fish, picked at by fish and seagulls had tried to pluck his eyes out.
He has highly complimented his rescuers on BARRENJOEY.
He is in good spirits.
Brett told Anita he wants to complete his surfing trip before returning home. Brett and Anita have two children, a 9 year old girl and a 6 year old boy.

NSRI Headquarters are keeping a vigil on developments in Indonesia where a Cape Town man, Brett Archibald, 50, from Camps Bay, fell overboard a boat at approximately 05h00 Indonesian time 17th April while on a surfing trip in the Mentawai’s.

Brett is well known to Camps Bay people, a keen surfer, a strong swimmer and has a love for the sea.

Water conditions are reportedly warm (28 degrees Celsius) and flat, night has now descended, but the search is continuing throughout the night and will continue tomorrow.

The South African Department of International Relations and Cooperation have been alerted.

It appears that he went overboard the vessel NAGA LAUT by unknown circumstances in a big sea swell between Padang, Sumatra and Sipora Island. (20 nautical miles East of Sipora Island – approximate position 99’55”E and 1’50”S).

Enquiries and communications (on behalf of the family) can be made via CRAIG LAMBINON – NSRI COMMUNICATIONS cell: +27 823803800 email: communications@searescue.org.za

The family have appealed for all help possible knowing that Brett is a strong swimmer and hopes are he makes it to land or is rescued.

The picture below can be downloaded for media use from Sea Rescue’s Flickr page. 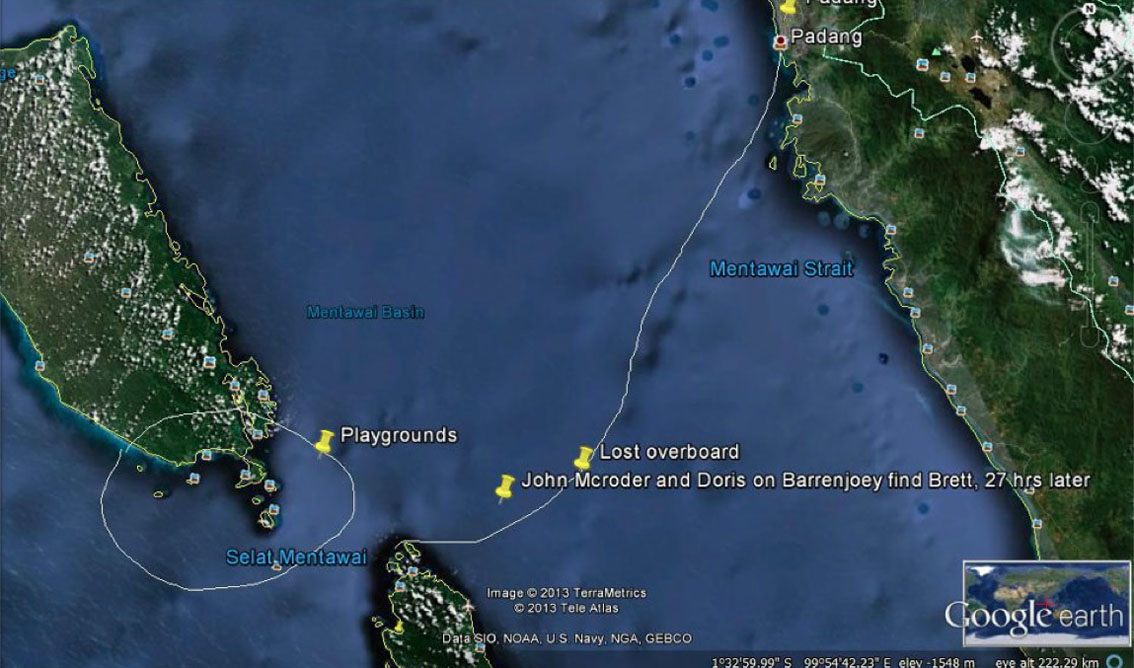