At 18h40 on Wednesday the 20th of March NSRI Still Bay volunteers  were activated by the Transnet National Ports Authority following a request for assistance from the 26 foot commercial fishing boat DANELLA II, with 7  crewmen onboard, reporting to be taking water through a hole in midships 44 nautical miles South West of Still Bay, between Still Bay and Witsand at Alpha Bunker (fishing grounds).

Enrico Menezies, NSRI Still Bay station commander said that DANELLA II had launched from Still Bay to go fishing  at Alpha Bunker, accompanied by two boats, but on arrival at the fishing grounds they found that they were taking water. The hole had appeared from unknown causes.
Water intake through the hole could only be partially stemmed with the boat underway and while they began to pump water out of the boat, using water pumps, they raised the alarm by calling Telkom Maritime Radio Services on the emergency radio frequency requesting assistance.

Our NSRI Still Bay  duty crew launched  SPIRIT OF ST FRANCIS and responded to rendezvous with the DANELLA II. NSRI Witsand and NSRI AGULHAS, the SA Police Services and the WC Government Health EMS were placed on alert.

Telkom Maritime Radio Services remained in radio contact with DANELLA II while continuing to plot her course ensuring that the sea rescue craft rendezvoused with her and maintaining radio communications during the rescue operation.

On arrival on-scene, at 21h00, 32 nautical miles South West of Still Bay, we found DANELLA II heavy in the water in choppy seas and initially 4 of the 7 crew were taken off the casualty boat (transferred onto our sea rescue craft) to lighten the casualty boat and we continued to assist to pump water out.

We escorted DANELLA II towards Still Bay for a further 5 nautical miles but the hole had appeared to get larger and the casualty boat was getting very heavy in the water, despite the best efforts to pump water out  and trying to get her safely to shore, and the decision was taken by the casualty boat skipper to abandon ship.

The skipper of DANELLA II, Anthony Richards, from Still Bay, had made a massive effort to save his boat while ensuring the safety of his crew.
The skipper realizing that a decision would have to be made on whether to try to continue on towards Still Bay or abandon his boat.

It was an emotional moment when the decision to abandon ship came from the skipper and 5 minutes after the remaining 3 crew members were safely taken off the casualty boat she filled with water and sunk. Only her bow remains out of the water, with an air pocket trapped in the bow, and we anchored the casualty boat to prevent her from drifting.

We remained on the scene for a further 15 minutes but the casualty boat did not sink completely. 28 nautical miles South West of Still Bay only a small section of the bow remains above of water.

Telkom Maritime Radio Services are broadcasting a navigational warning to vessels in the area warning of the navigational hazard.

All 7 crew members of the casualty boat were brought safely ashore to Still Bay aboard our sea rescue craft. There were no injuries. The rescue operation was completed at 23h45.

The owners have not decided if a salvage operation will be attempted or if the semi sunk casualty boat will be scuttled at sea and it is unknown at this stage if the casualty boat has perhaps now sunk completely. 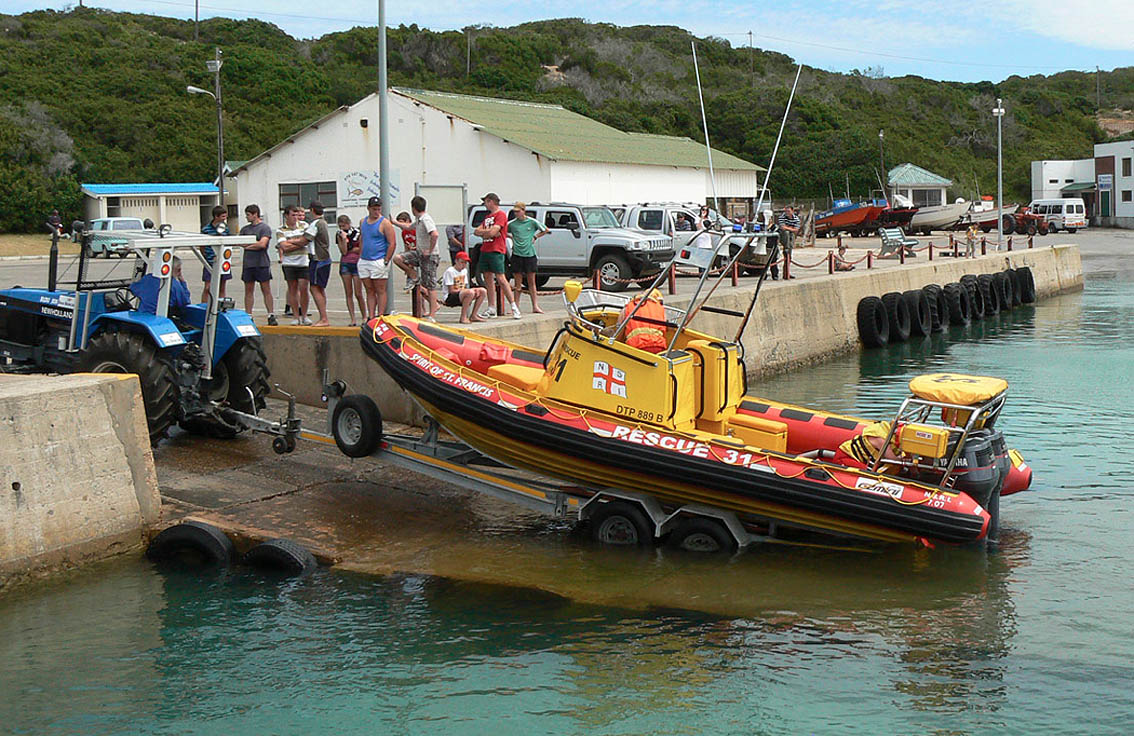