A surfboard by Brett Murray sold for R42,000 at the Wavescape Charity Art Auction last night. The board, bought by a Noordhoek surfer, fetched a record price amidst hoots and cheers as 600 people packed the Superette restaurant and next door exhibition space in the Woodstock Exchange, Cape Town.

Urged on by comedian Mark Sampson, who hammered a metal-forged gong in the shape of a shark, the proceeds from 11 lots set a new record of R234,000. Proceeds go to the NSRI, Shark Spotters and the HIV awareness project, Waves For Change.

Murray’s board, a satirical spoof of an old struggle poster designed by Zapiro in the 1980s, came in at R14,000 more than the next item, a glazed oil painting by Peter Van Straaten, depicting a bell diver set in a moody depiction of deep sea light. The R28,000 fetched by Van Straten’s board sneaked ahead by a mere R500 of Guy Tillim’s inspired photographic depiction of a South Pacific island. Purchased by a regular supporter of Wavescape, Dave Maxwell, the Tillim board joins his collection at home that includes Richard Scott, Craig Paul and Rory Valentine, Black Koki, Richard Hart and Chip Snaddon.

The big surprise of the evening was the Wim Botha surfboard turned into a beast-like feather sculpture. Collectors of his works, which regularly fetch many tens of thousands of rands, will feel they missed out on a bargain, with this work selling for R13,000.

In another innovation at Wavescape, the Family Board, which honours the memory of John Whitmore, and a framed image of the ‘Oom’ were sold for R10,500. A big section of the Whitmore clan were there to be part of this bid with a difference. The Family Board is an original John Whitmore, shaped by the grandfather of surfing in South Africa in the mid 1960s, and the buyer does not get the board, only the picture. But what he gets is part-ownership of a special concept.

Midway through the auction, the valuable antique board was ceremoniously handed to the first surfer in a lineage of trust linking the surfing family around the world. Michaela Gabriel, the first recipient of the board (including two digital cameras), will surf the board and document her experience, before handing it to the next human link in a chain that transcends country and creed. The only proviso, is that creators of the project, Ross Frylinck and Conn Bertish, want the board back in December 2013, when it returns to its original owner Dave van Ginkel.

Two rooms at the Woodstock Exchange were jam packed as guests crammed the surfboard space and Superette, before the boards were brought over for auctioning. Several silent bids were already on the table by the time the auction got underway, including a secret bid by former Springbok rugby captain Bob Skinstad, a keen surfer who told Spike earlier that day on 2OVfm that he manages to surf all over the world when doing his television commentating work.

The festival has also sparked the creative energy behind two new drinks. Jack Black have announced the creation of Great White beer, a German style Weiss beer that will also raise funds for the Shark Spotters every time it is purchased. Wavescape and Grangehurst have also announced the pending launch of the Red Barrel and White Curl, a wine series that celebrates the blend between surfing and winemaking.

The evening marked the beginning of the Wavescape Surf Film Festival, which is presented by Pick n Pay and supported by Jack Black Beer, the Save Our Seas Foundation and Billabong South Africa.

For a full list of artists, films, venues and the programme for this must-do event on Cape Town’s summer calendar, visit www.wavescapefilmfestival.co.za

For more information and a short film on the Family Board Project: www.thefamilyboard.co.za 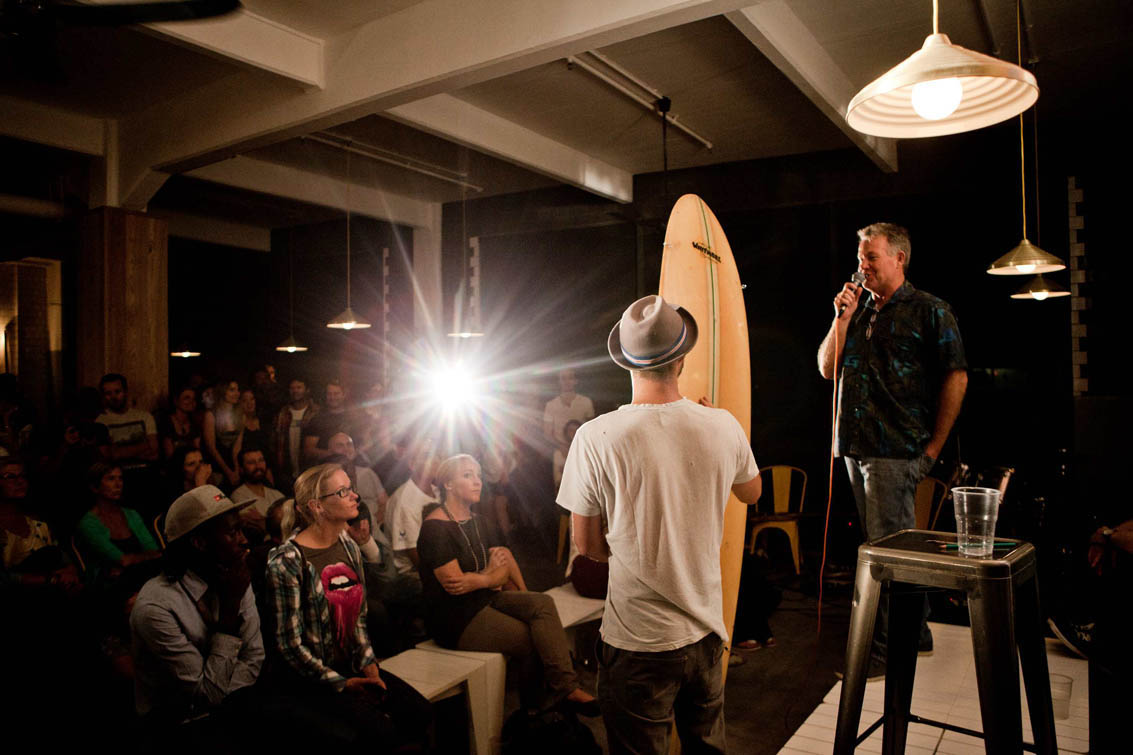