At 10h00 (Tuesday, 30th October) NSRI Knysna volunteer rescue crew responded to a request for assistance from the 20 meter Catamaran yacht LYNSCHOTEN, sailing from Richard’s Bay to Cape Town, reporting to be taking water, with motor and generator flooded, and foundering, adrift at sea, 11 nautical miles South of the Knysna Heads, with 5 crew onboard, 2 females and 3 males.

Graeme Harding, NSRI Knysna station commander, said: “We launched our COLORPRESS RESCUER and responded in choppy rough seas with 4 to 5 meter swells, and rendezvoused with the yacht and found her to be listing and in peril.  Sea rescue crew were put aboard to begin pumping the yacht free of water while we established a tow-line.

“Realizing that the towing effort would not make it through Knysna Heads in the adverse sea conditions we began towing the yacht towards Mossel Bay and alerted NSRI Mossel Bay to launch later in the day and, once closer to Mossel Bay, the NSRI Mossel Bay boat could take over the tow from us.

“All crew onboard were safe.”

At 15h00 NSRI Mossel Bay crew launched VODACOM RESCUER and rendezvoused with the casualty yacht and NSRI Knysna 20 nautical miles North East of Mossel Bay and took over the towline.

NSRI Knysna returned to base arriving safely in Knysna at 18h30.

Andre Fraser, NSRI Mossel Bay station commander, said: “On arrival on-scene we took over the tow from NSRI Knysna, releasing them to return to Knysna.

“The tow is slow progress in strong winds and big sea swells and we expect to have them safely in Mossel Bay by around 23h00 tonight.

“Everyone onboard is safe.”

No details of the crew on the casualty yacht are available at this stage and an update will be posted tomorrow. 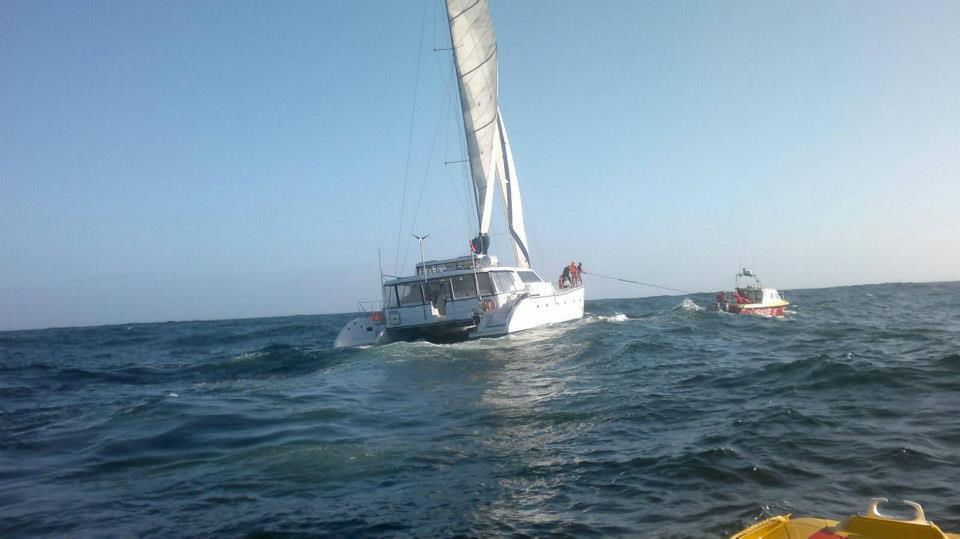