Our Sea Rescue Helicopter Unit (SRHU) is on a visit to the US Air Force – here is an update from Rob Fine:

The team was taken to the New York Fire Department Training Academy where they were invited to observe the Pararescue competition. We were also invited to do a special tour of the academy and view the extensive training facilities which are the best in the world. 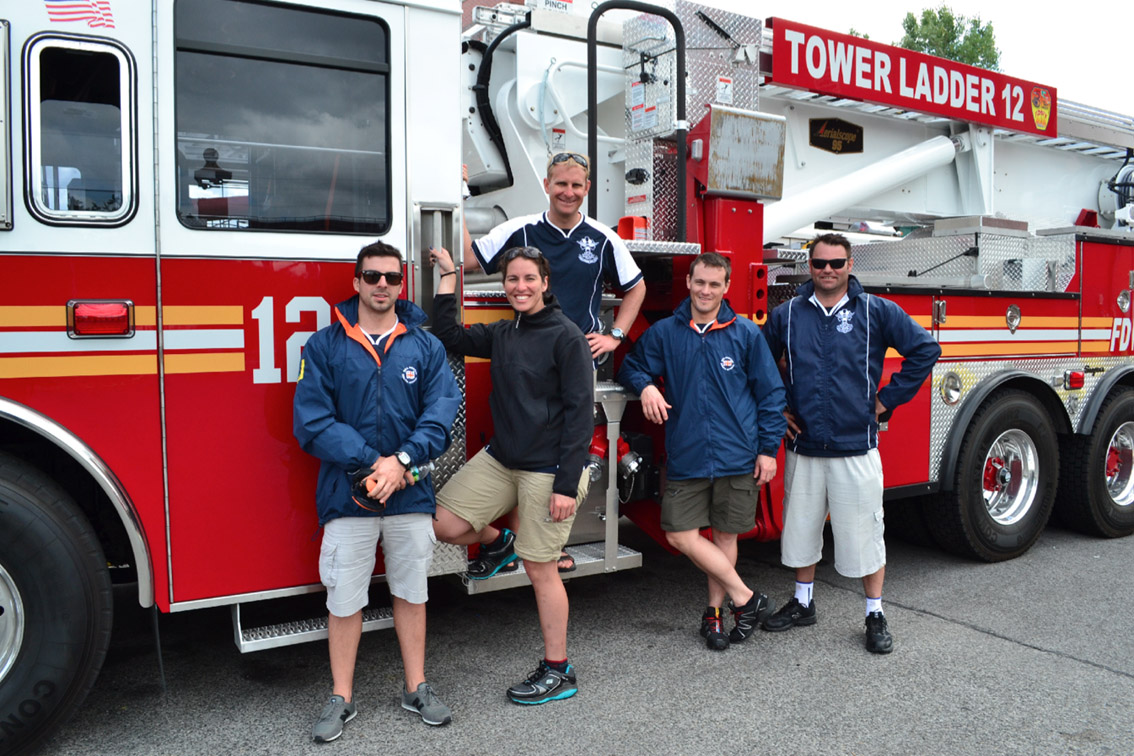 A scenario was setup for the Pararescue teams to recover a patient trapped in a confined space.
The teams started by completing as many pull-ups in 3 minutes as possible while dressed in full gear. Once completed, they had to pickup the rescue gear and run up to the roof a 4 story building. Here they discovered their patient was at the bottom of a 4 story confined space. 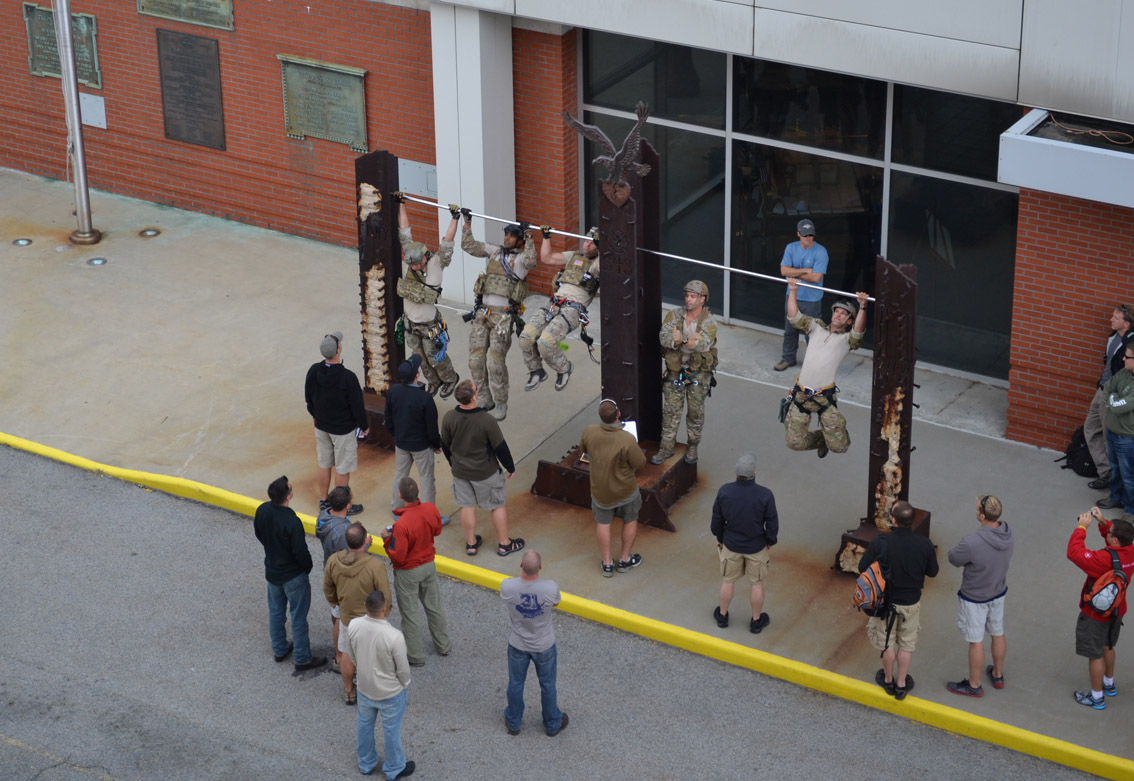 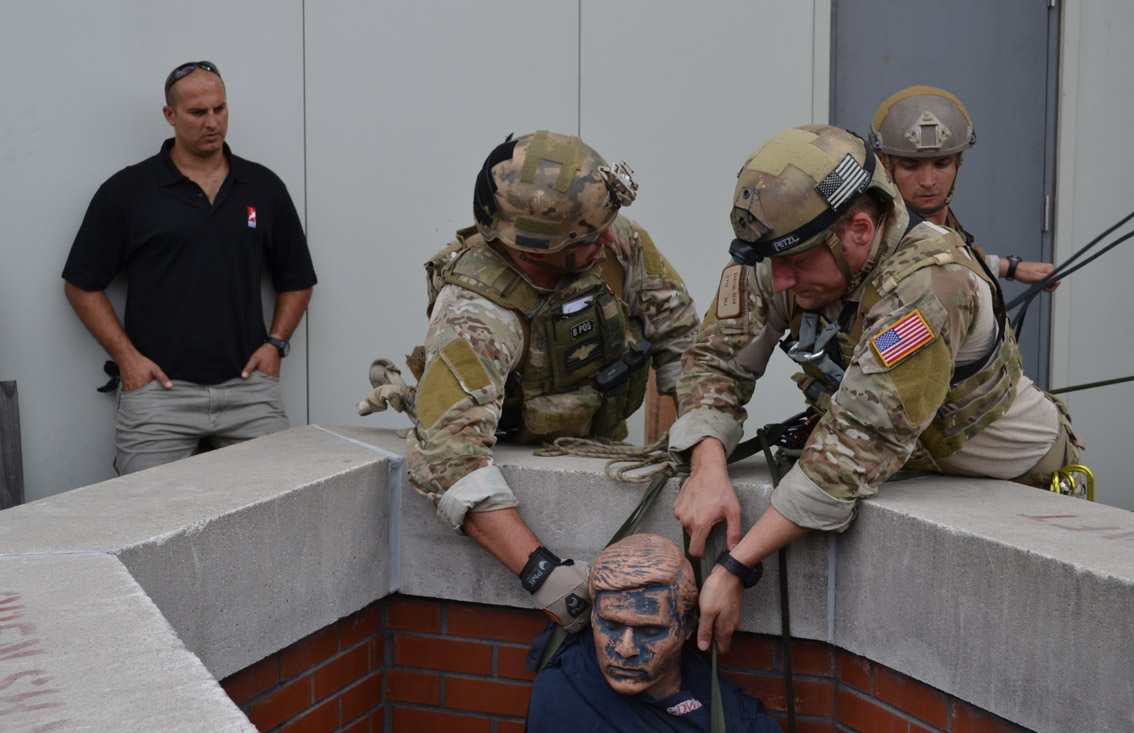 They had to rig up ropes, absail down the confined space and recover the patient, a dummy that weights about 80Kg. The dummy had to be packaged into a Sked stretcher and then belayed off the roof. The team then had to safely lower themselves leaving no climbing equipment behind. All this was timed and the team who completed in the fastest time and did not leave any equipment on the roof won. 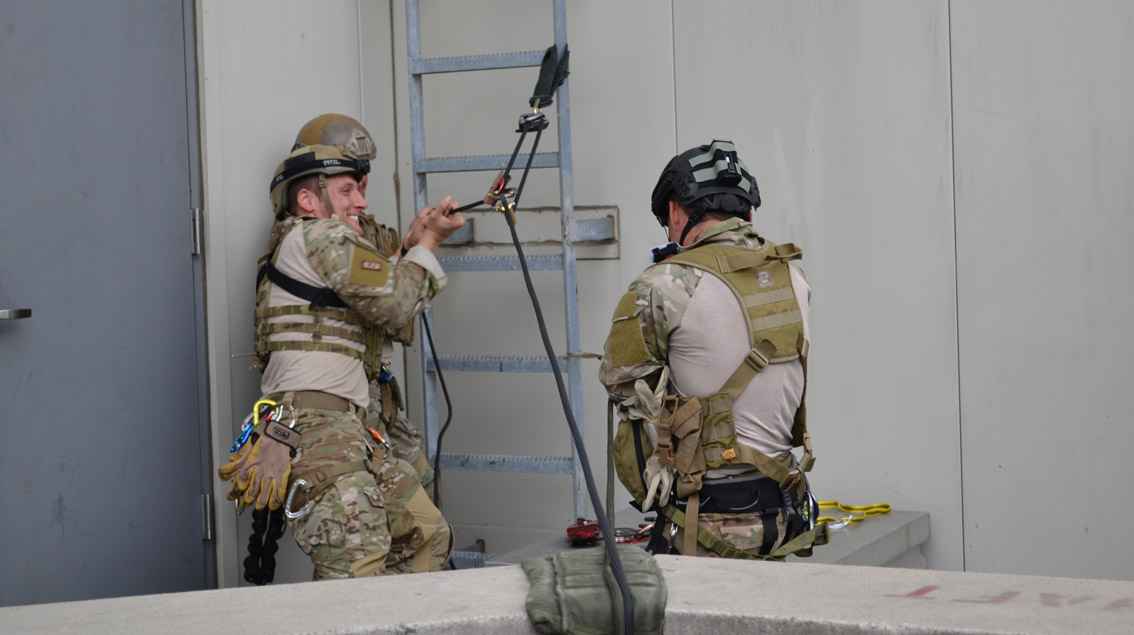 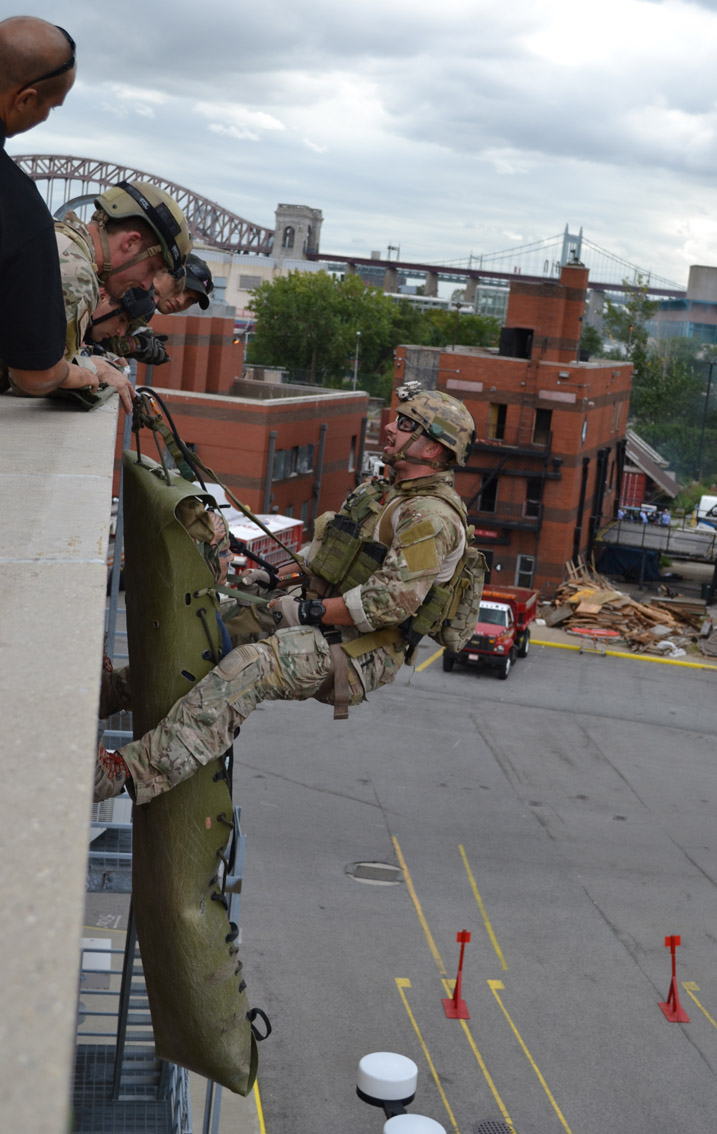 Our Sea Rescue Helicopter Unit (SRHU) is on a visit to the US Air Force and were invited to take part in the 2012 Pararescue rodeo and won the Bootlegger boat run! : 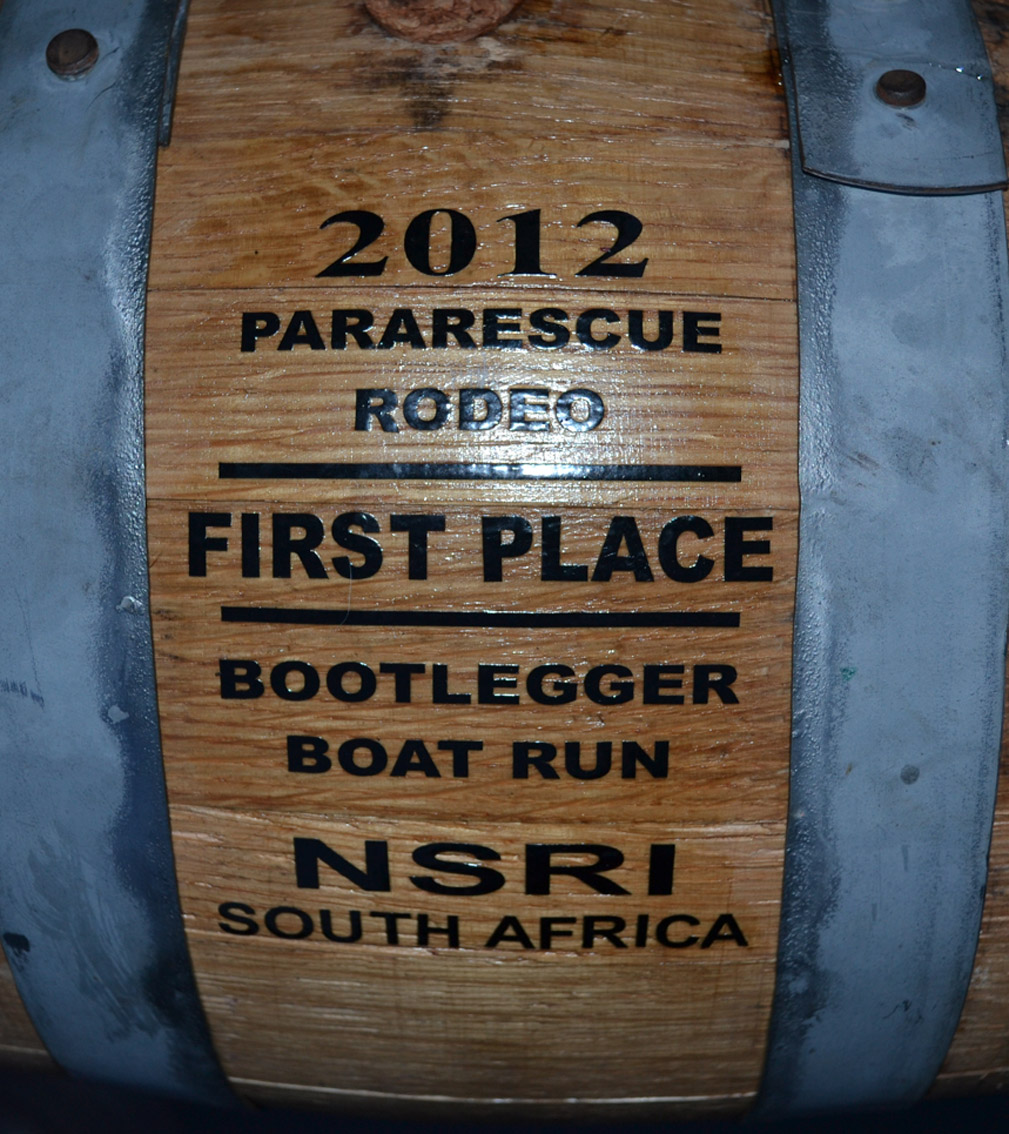 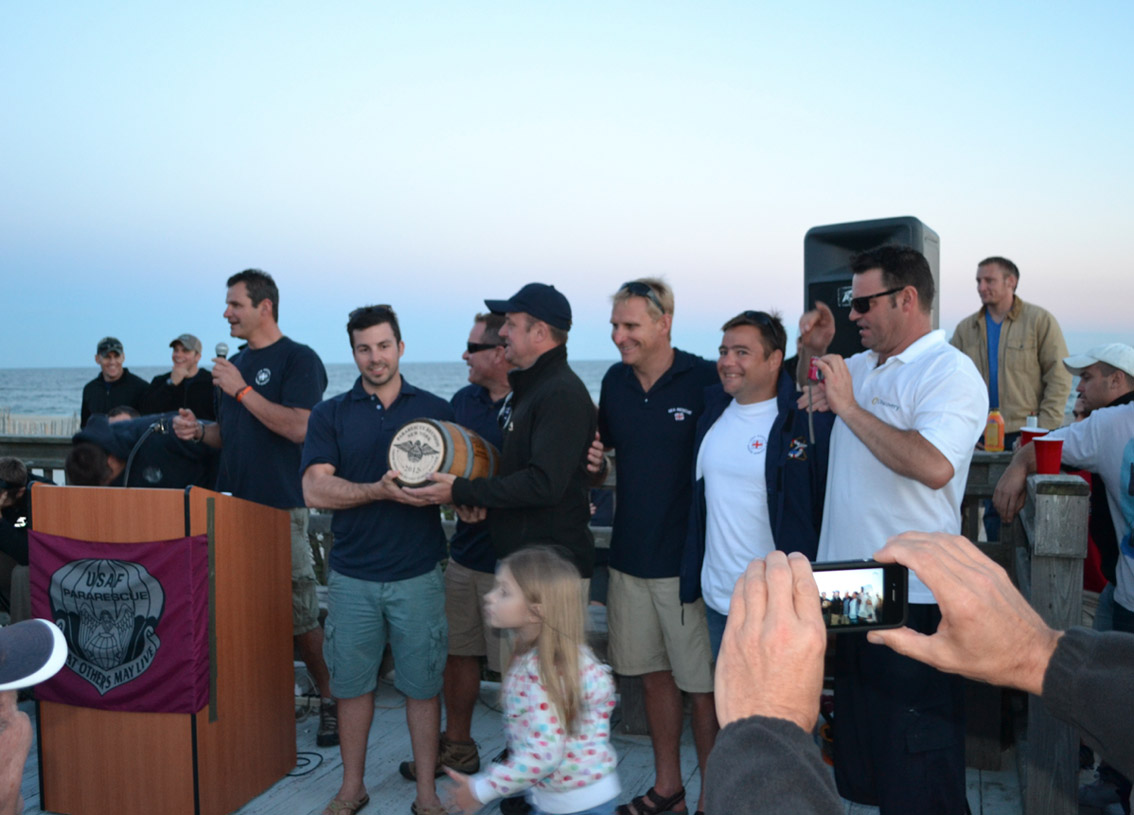 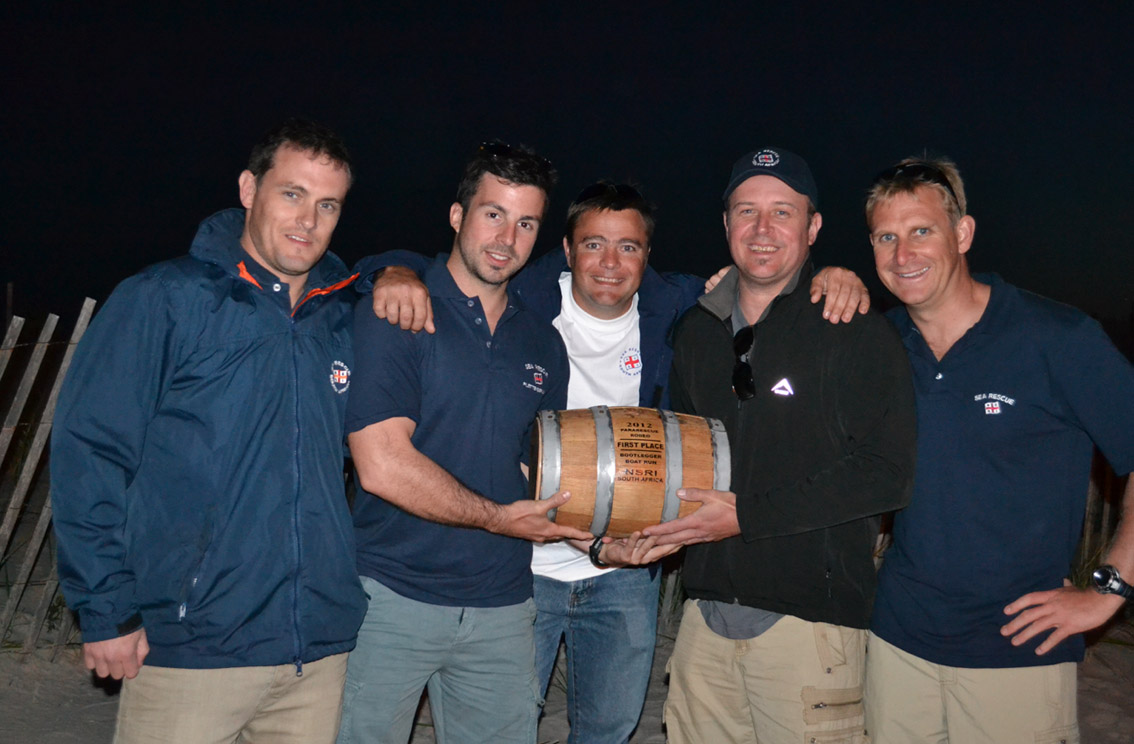 NSRI was officially invited to enter a 5 man team and compete against the USAF Pararescue teams. The team members were Kevin Warren, Marcus Oshry, Robert Fine, Bradly Thomas and Graeme Watson. Kim and Andre assisted with standby rescue on 2 Jetskis while Bruce was tasked with setting up and running the diving event in the harbour.

The team was provided with a zodiac, 30HP Johnson submersible outboard and safety gear. The course was set over approximately 78Km return route and required good use of navigational, boat handling and teamwork skills. We were only given the course and a navigation chart 20 minutes before starting. Seven teams were entered all starting 20 minutes apart. This was done to ensure there were no bottlenecks at the 2 event points. We were given boat number 003 so we started 3’rd.

The course was a follows – Start in the marina and paddle out to a bridge taking approximately 1.6km (20 minutes). Once there, Rob climbed a 10 meter rope and had to write down 2 combination numbers which were printed on a metal plate on the top. At this point Kevin started the engine and we raced off to Greenpoint Harbour at top speed. We had 15 – 20Knot cross shore winds proving a short nasty chop and keeping us soaking wet. Half way, our motor decided to slow down… This did not look good, however worked out it was due to moisture build up and sorted itself out. We did not see a single zodiac until we arrived close to Greenpoint harbour. About 10 minutes out, we looked back and in the distance we saw one black zodiac filled with camouflaged crew that was slowly closing in on us. At this point we started thinking our boat was slow, had we made a navigational error and took a longer route? Our sprits sunk a bit but we sped on. As we arrived into the harbor we only saw one boat and that team was still trying to retrieve their fuel! We realized we had actually overtaken one of the teams that had started before us and radically caught up. The race was back on and we were in high spirits.

Kevin, Graham and Marcus sped off to fetch the Keg. Using a bit of South African ingenuity, they commandeered a trolly and the keg was on it’s way to the boat with minimal effort.
Meanwhile Brad and Rob took on the diving challenge.
Diving down to 5 meters and trying to undo a combination lock in murky waters proved to be the biggest challenge yet. (not to mention right next to you is a highly trained Pararescueman also fighting for the same lock) We expected our competitors to cruise through this part since we don’t specialize in diving, however everyone seemed to have the same challenge. After a while we got Kevin to jump in and assist, since he had a fresh pair of lungs and we had worked out a good system to get at the locks, he undid the combination on his second attempt. (we think this was the fastest for the entire race!!)
Now we unlocked the spare fuel, loaded and sped off at full speed, nose first into a heavy chop. The ride back was hard,the wind had picked up and everyone was getting pounded but we pushed on, we had to get this race at all costs! We shortly over-took one of the boats that left the harbor just before us and eventually had the first team in our sights. Our boat speed, trim and driving skills were paying off. We were catching them.
Once we passed the bridge we had to switch the motor of and paddle again, after about 10 minutes of hard paddling we arrived!

Everyone was impressed with our boat skills and sheer determination to do our best and keep the boat going.

You can read the report from the American newspaper Riverhead news here.