On Tuesday, 14th August, this past week, Police, who are continuing an ongoing search operation at Plettenberg Bay, discovered the body of one of the 4 missing men, from the Plettenberg Bay, Keurbooms River incident, washed up on the beach approximately 2 kilometers North East of the Keurbooms River Mouth. The body of the man was handed into the care of the Forensic Pathology Services and has been positively identified by the families as one of the missing men. This has left 3 men from the Plettenberg Bay incident as still missing.

Police and Police Divers are continuing a search for the remaining 3 missing men while now also investigating the possibility that the body of the man found between St Francis Bay and Port Elizabeth yesterday (Friday, 17th August) may be that of one of the missing Plettenberg Bay fishermen.

On Friday afternoon 10th August, NSRI officially handed the ongoing search and investigations into this incident over to Police.

It remains unknown what caused this incident and the fate of the 4 men and their boat remains unknown. A huge search and rescue operation has revealed no sign of the boat or the missing men.

It is now confirmed that there were 6 people originally on the small tiller arm boat. Four men, one a 50 year old and the remaining 3 in their 40’s, and their boat remain missing.

They are all locals from Plettenberg Bay and it remains understood that they had launched to fish on the river yesterday afternoon but had failed to return when the alarm was raised. It remains unknown what had happened although all indications suggest that their boat had been swept out to sea through the river mouth and may have capsized.

A large contingent of family and friends of the two deceased and of those missing have gathered at the scene to keep a vigil.

From first light this morning, Friday, 10th August, an extensive search is continuing for the missing persons at Keurbooms River Mouth, Plettenberg Bay.

Shortly after the search commenced today the body of the 8 year old child was found and recovered by NSRI and a Forensic Pathology Services team are en route to the NSRI Plettenberg Bay rescue station where the body of the child will be handed into their care.

The father of the child has been informed. NSRI and rescue services have extended sincerest condolences for the loss of his wife and child.

The whereabouts of the boat and the 4 missing men remains unknown and an extensive search and rescue operation continues.

NSRI rescue swimmers are onboard the EMS Skymed helicopter that is searching.

Confirmation is also being sought to determine if there were in fact six people onboard the boat (or only five).

From what we understand, although the full details are not yet confirmed, 5 people (believed to be family members – 3 men, a woman and her son) and a friend (an adult man), all from Plettenberg Bay, had gone fishing on the river on a small river boat yesterday. When they failed to return the alarm was raised by their family members sparking a massive search and rescue operation.

A more detailed and thorough analysis of the situation is being investigated and Police have opened an inquest docket.

“At 20h30 on  Thursday, 09th August, NSRI Plettenberg Bay duty crew were called out following reports of a tiller boat (a small river boat), with 6 people onboard, overdue from fishing on the Keurbooms River.

“Our Plettenberg Bay duty crew launched Ian Hepburn and our Discovery rescue runner while NSRI rescue swimmers and the SA Police Force responded to the scene.

“On arrival on-scene a search commenced for 6 persons and their boat – 4 men (between 40 and 50 years old ), a 43 year old woman and her 8 year old son, who were missing after fishing on a tiller boat on the Keurbooms River.

“During a search the body of the woman was found and recovered by NSRI Plettenberg Bay volunteers in the surf at the river mouth. Her body has been handed into the care of the Forensic Pathology Services.

“It is unknown at this stage if the boat and the remaining missing people were swept out of the river mouth. There are no eye-witnesses to help shed light on what may have happened.

“They are all from Plettenberg Bay. The woman, her son and 3 of the men are believed to be family members and the remaining man is a friend.

“Police are attending to the families of the missing persons who have mustered at the search control point which has been set up on the shore of the Keurbooms Lagoon.” 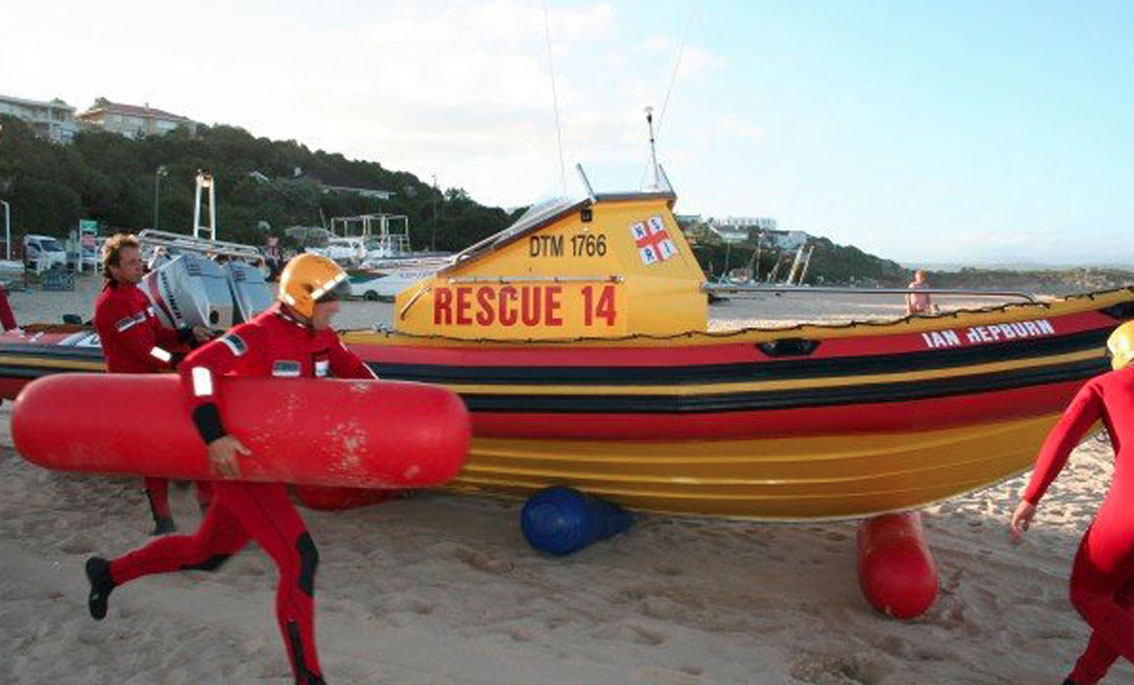