At 10h21 on the morning of Wednesday, 18th July, members of the SA Whale Disentanglement Network were activated following reports from Daantjie de Beer, skipper of the Paternoster Fishing Companies fishing boat Biskop, at sea off-shore of Cape Point, 1 nautical mile off-shore of Hoek van Bobbejaan, between Scarborough and Cape Point, of a whale entangled in fishing rope and a flotation buoy.

Volunteers of the SA Whale Disentanglement Network were activated while the NSRI (National Sea Rescue Institute) Simonstown base dispatched their rigid inflatable sea rescue craft Eddie Beaumont II to rendezvous with the fishing boat in order to get a visual of the whale and to assess the extent of the entanglement.

Once on-scene the NSRI volunteers confirmed that a young adult 9 meter Humpback was entangled in rope and a flotation buoy.

“About 20 meters of rope was entangled around the whale, around both tail flutes and looped around to the right pectoral flipper with a small flotation buoy trailing about another meter of rope, constricting the whales movement and causing the whale to be unable to fully extend to its full length, and it was immediately obvious to us that the whale was tired and uncomfortable.

“Once we began the operation, with the the sea rescue boat maneuvering as close to the whale as possible, we made three cuts on the rope at intervals. In the process of making these cuts one of the cutting poles went overboard but was fortunately recovered and then the tip of one of the cutting knives snapped but we managed to continue using the knife.

“After three cuts, at different places along the rope, the rope came completely free and we recovered all of the rope including the flotation buoy and we then also discovered a crayfish ring attached to the rope which had two crayfish inside the ring which was also recovered. (Both crayfish were released back into the sea).

“The operation was made difficult by the rope mostly extending underneath the whale forcing the sea rescue boat, at times, to have to get up and on top of the whale in order for us to reach the rope, but all the while, as we made the progress with the incisions on the rope, the whale was reasonably cooperative!”

Once the rope was cut the whale swam off strongly and fully extending its torso to its full length as it dived and looking completely comfortable in its element.

Only a few minor lacerations and scrapes were observed on the otherwise healthy looking whale.

The operation was completed by 15h30. 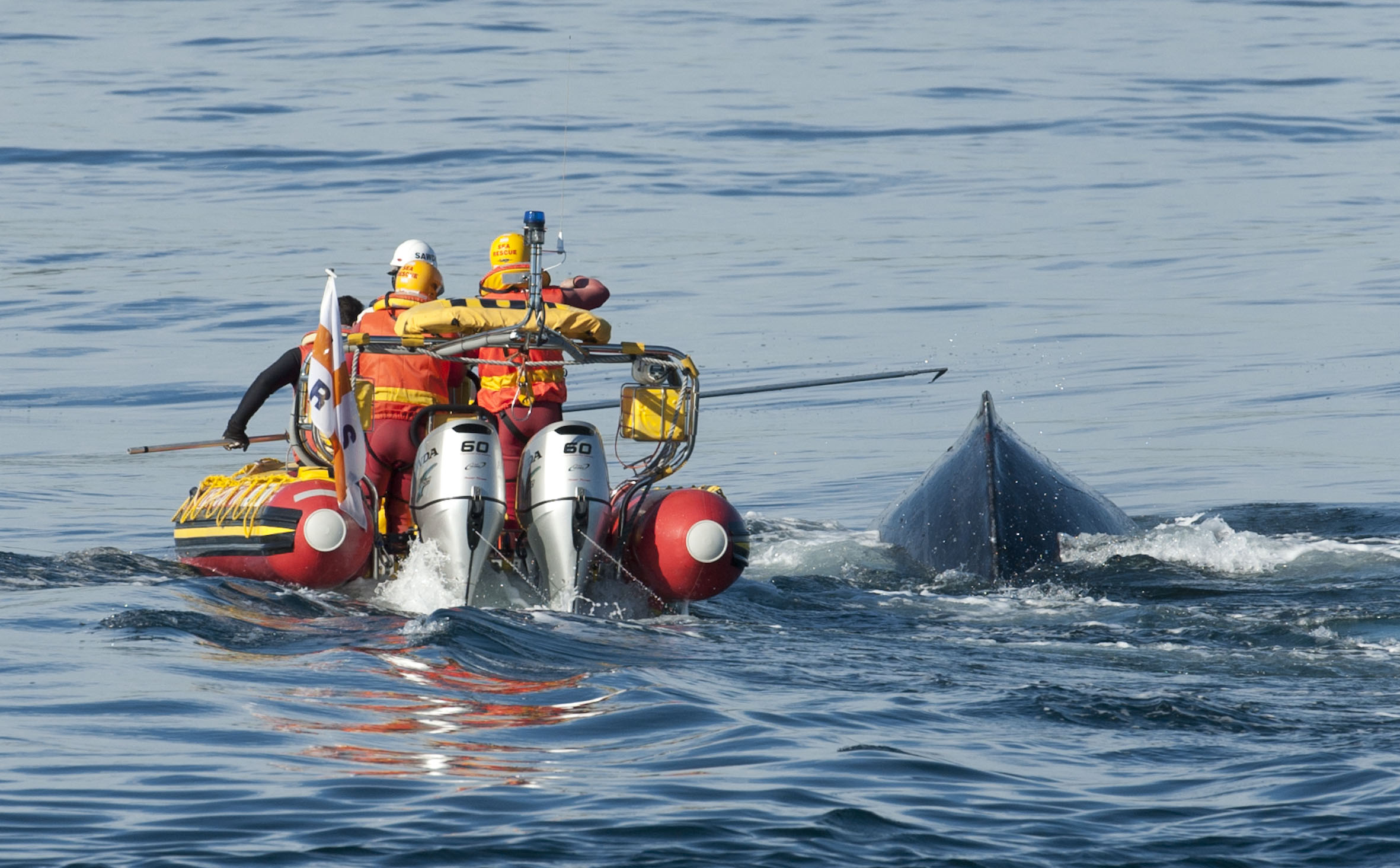 THE SA WHALE DISENTANGLEMENT NETWORK IS A SPECIALIZED NETWORK OF VOLUNTEERS SET-UP IN 2006 TO DEAL WITH THESE TYPES OF SITUATIONS AND COMPRISES VOLUNTEERS – FROM NSRI, THE DEPARTMENT OF ENVIRONMENTAL AFFAIRS – OCEANS AND COAST, SA NATIONAL PARKS, CAPE NATURE, THE SA POLICE SERVICES, VARIOUS AQUARIUMS from around South Africa, THE NATAL SHARKS BOARD, BAYWORLD, VARIOUS OTHER ORGANIZATIONS AND VOLUNTEERS, with the support of the Dolphin Action and Protection Group (DAPG).
SAWDN COVERS THE ENTIRE SA COASTLINE.