Knysna
At 19h20 NSRI Knysna duty crew were called out for a woman injured by a dog on the Knysna Jetty, near to the Knysna Yacht Club.

NSRI Knysna volunteer sea rescue duty crew responded to the scene where they found the woman, in her early 50’s, with a fractured leg and a suspected dislocated shoulder. NSRI Knysna medics treated her on-scene before transporting her to hospital in a serious but stable condition. NSRI Knysna station commander, Graeme Harding, said that it was a large dog that had knocked the lady over on the jetty.

Melkbosstrand
At 16h07 NSRI Melkbosstrand volunteer sea rescue duty crew were activated following reports of a suspected drowning in progress at Melkbosstrand Beach.
It appears that a 19 year old man, from Atlantis,had an epileptic seizure while swimming. An unidentified man on a jet-ski and local lifeguards rescued the teenager from the water. On arrival NSRI medics commenced treatment on the semi-conscious man and he was brought to the medical room at NSRI Melkbosstrand rescue base where treatment continued.
Metro EMS were summoned and he has been transported to hospital in a serious but stable condition by Metro EMS ambulance.
The teenagers mother, who was with him at the beach at the time, accompanied her son to hospital.

St Lucia
At 12h34 NSRI Richards Bay volunteer sea rescue duty crew responded to North of the St Lucia lighthouse following reports from the local lighthouse keeper of 4 people being swept out to sea.
NSRI launched a sea rescue rigid inflatable craft on-scene and the Transnet National Ports Authority rescue helicopter, Police, Netcare 911 ambulance services and Ezemvelo KZN Wildlife rangers joined in the operation. Two of the people had managed to get out of the water safely without assistance prior to rescue services arriving on-scene. One person was assisted out of the water by bystanders prior to the rescue services arriving on-scene.

An extensive search is continuing for a 22 year old man who is missing and who is presumed to have drowned.

A Police Dive Unit have been activated.

St Helena Bay
At 13h38 NSRI Mykonos volunteer sea rescue duty crew and a Police boat were called out following reports of two red distress flares sighted, by multiple eye-witnesses, coming from the vicinity of the North Blinder, 6.7 nautical miles off-shore of St Helena Bay.
An extensive search, including a sea rescue craft, a Police boat and commercial oil tankers at anchor at sea in the vicinity of North Blinder has revealed no sign of any boat or any persons in distress. All boats that launched at St Helena Bay today have returned and all persons and boats are accounted for. It is unknown the origin of the red distress flares and while rescue authorities remain on alert the search has been suspended pending any new and credible information that may shed light on the matter and which may initiate a new search.

Gordons Bay
At 11h40 NSRI Gordon’s Bay were called out following eye-witness reports of 2 men being swept out to sea on a small inflatable boat in a 35 knot off-shore wind.

On arrival our rescuers in our sea rescue vehicle spotted the 2 men and directed our responding sea rescue craft to their location. On arriving the two men were rescued and their small blow-up inflatable craft was recovered.

Kevin Murray, from Brackenfell, and Johan Visagie, from Durbanville, both in their mid 30’s were not injured and were brought to our sea rescue base in Gordon’s Bay, aboard JACK RILEY.

They had launched earlier in the day to crayfish off Pringle Bay but as the off-shore winds increased in speed they were blown out to sea. Not wearing life-jackets, and with no communications device, no red distress flares and no other safety equipment they had attempted to stop their boat from being swept out to sea.
Had eye-witnesses not spotted them it is feared that the worst may have come of these two men. Their grey boat was hard to spot in the choppy, white horses sea conditions and we therefore estimate that they are extremely lucky that the eye-witness had spotted them.

PICTURES FOR MEDIA ARE AVAILABLE ON THE NSRI FLICKR PAGE 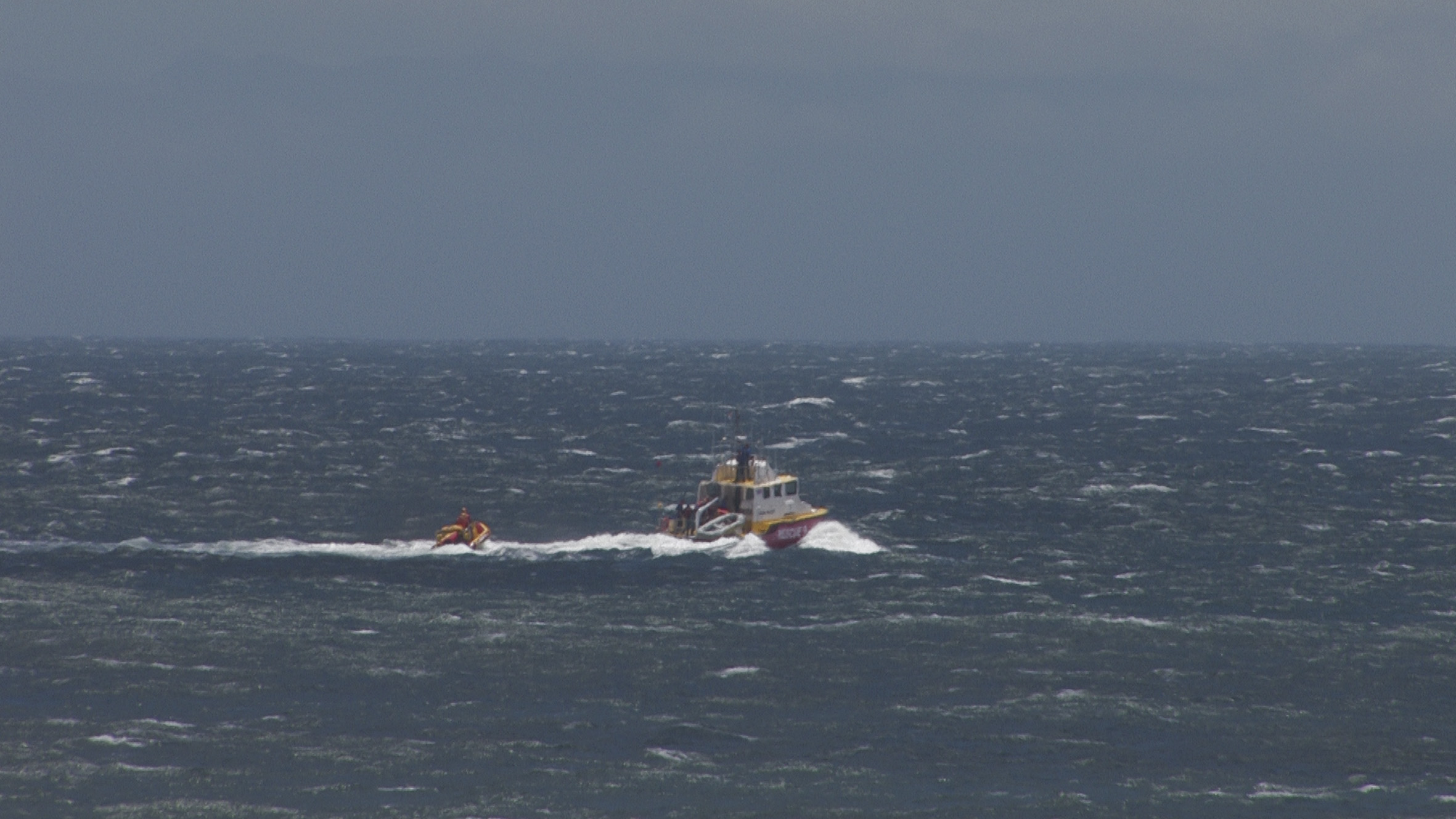 Jeffreys Bay
At 09h52  NSRI Jeffreys Bay duty crew were called out for a multiple drowning in progress at the Ashton Bay Beach next to the Seekoei River Mouth.
NSRI Jeffreys Bay volunteer sea rescue crew launched a sea rescue craft and NSRI mobile units responded. On arrival it was confirmed that a Grade 6 pupil from Pretoria had been rescued from the water by two bystanders, Pieter Kruger, from Benoni, on holiday in Jeffreys Bay and a local Jeffreys Bay business man, Glen Buchner. When all 3 people, the casualty and her two rescuers , were in the water it gave the impression to eye-witnesses that it was a multiple drowning incident.

The patient was treated for minor symptoms of near drowning and has been released into the care of her family in a satisfactory condition.

Hout Bay
Hout Bay volunteers, Cape Town Fire and Rescue Services and the SA Police Force responded, at 12h28, to Hout Bay Main Beach following reports of two children in difficulties in the water.
On arrival a 9 year old boy was treated for near drowning symptoms and hypothermia and a Metro EMS ambulance was summoned. Two boys, a 9 year old and a 7 year old, both from Imizamo Yethu, had been rescued from the water by a local stand-up paddle boarder, who had spotted the children in difficulties in the water. It appears that they had both been swept out to sea by strong rip-currents while swimming.

Because of traffic congestion and an urgent need to get the 9 year old boy, who was in a critical condition, to hospital the Metro EMS Skymed helicopter was summoned and he has been airlifted to hospital by Skymed in a stable but serious condition.

The 7 year old was released by paramedics on-scene, he was in a satisfactory condition, and released into the care of Law Enforcement officers who will attempt to track down the children’s parents.

It appears that both children were swimming at the beach with no parental control or adult supervision. Brad Geyser, NSRI Hout Bay station commander, has requested beach patrol officers, through the local ‘Watchcon’ ADT and neighborhood watch, to caution bathers, at Hout Bay Main Beach, of the strong rip-currents that prevail there.

NSRI is urging caution on the beaches. Rough sea conditions and strong rip-currents prevail. We are also urging the public to be particularly cautious at beaches adjacent to river mouths and adjacent to beach outcrops (where rocks, islands, piers and harbour walls jut out into the sea). These places often have strong rip-currents.

Gordons Bay
At 01h07on Sunday 08th January Gordons Bay duty crew were called out following a request for assistance from the 32 foot yacht SABATEUR, sailing from Mossel Bay to Gordons Bay, with 5 crew onboard. Having reached Steenbras River Mouth, near Gordons Bay, SABATEUR  were unable to progress any further due to the gusting up to 50 knot South South Easterly winds, and up to 3 meter swells, and needed assistance into the harbour.

Our duty crew launched JACK RILEY and on arrival a tow-line was rigged and under extremely difficult sea conditions the yacht was towed into the harbour arriving at 05h00 this morning.

Second call for Gordons Bay
At 15h05 on Sunday 08th January NSRI Gordons Bay volunteers were called out by Metro EMS following reports of a drowning in progress at Harmony Park, Strand.

After all efforts to resuscitate the child were exhausted on-scene the child was declared dead.

Richards Bay
At 15h46 NSRI Richards Bay duty crew were called out for a drowning in progress at Esikhawani Beach, 10 nautical miles South of Richards Bay.

Our Richards Bay volunteers launched Spirit of Round Table and our sea rescue vehicle and the SA Police Force responded.

An extensive search has revealed no sign of the teenager and a Police Dive Unit have been summoned to continue with an ongoing search operation.

A total of 22 deaths from water related accidents around the South African coast have been recorded since the beginning of 2012.
This figure does not include four people reportedly still missing from flood related incidents in Kwa-Zulu Natal and does not include 3 people who died following a boating accident at Bronkhorspruit.

While official statistics are kept by the Medical Research Council NSRI can confirm that of these 22 deaths a total of 6 persons are still missing, presumed to have drowned, around the coast.

NSRI fear that this figure will increase as holiday makers and learners make the most of their last days of the holidays in the peak of the full moon spring tide which causes the strongest rip currents to prevail and will last until later this week and we urge recreational bathers and boaters to exercise extreme caution.

NSRI urges people living around the coast or those visiting the coast to find out what their nearest sea rescue emergency phone number is  ( Click here).

Another phone number essential to have programmed in your phone for coastal or inland emergencies is the National Emergency Medical and Rescue toll free number 10177 which can be called from any phone to activate the medical or rescue emergency services.