All of these incidents happened on Monday 26th December:

At 14h00 NSRI East London duty crew were called out following a request for assistance from the 6.5 meter fishing boat Rock ‘n Roll which had engine trouble and gearbox problems off Cove Rock, 25 nautical miles South of East London.
NSRI East London launched LOTTO RESCUER and on arriving rigged a towline and towed the vessel, with men from East London on board, to East London.
The tow, in 1.5 meter choppy sea swells took 4 hours.

At 15h30 NSRI Wilderness volunteers were called out following reports of a child drowning at Wilderness.
On arrival it was found that lifeguards had rescued the child from the surf and were treating the child for near drowning symptoms and a Metro EMS ambulance has transported the child to hospital in a serious but stable condition.

Then at 16h55 NSRI Wilderness responded to Kleinkrans where a woman was reportedly swept out to sea.
She had washed out onto the beach where an off-duty paramedic dragged her out of the water and initiated CPR (Cardio Pulmonary resuscitation) efforts.
NSRI medics and Metro EMS paramedics continued with CPR and a pulse and breathing was successfully restored before the 27 year old woman, from George, has been airlifted to hospital by the Metro EMS Skymed helicopter in a critical condition.

At 14h30 CMR (Cape Medical Response) paramedics responded to Boulders, near Simonstown, following reports of a man fallen from rocks.
In a barely accessible area amongst steep rocks at Boulders Beach the man, 45 year old Allan Evans, from Merthyr Vale, Wales, was treated for a suspected fractured femur.
Unable to remove the patient from the scene, due to the steep rocky terrain, the NSRI Simonstown duty crew were called and a floating stokes basket stretcher was used to swim the patient, secured into the stokes floating stretcher, around the sea side of the rocks to the beach where the patient was loaded into an ambulance and transported to hospital in a serious condition.
It is suspected that the patient fell from the rocks while walking.
Pictures for media download are available on Sea Rescue’s Flickr page. 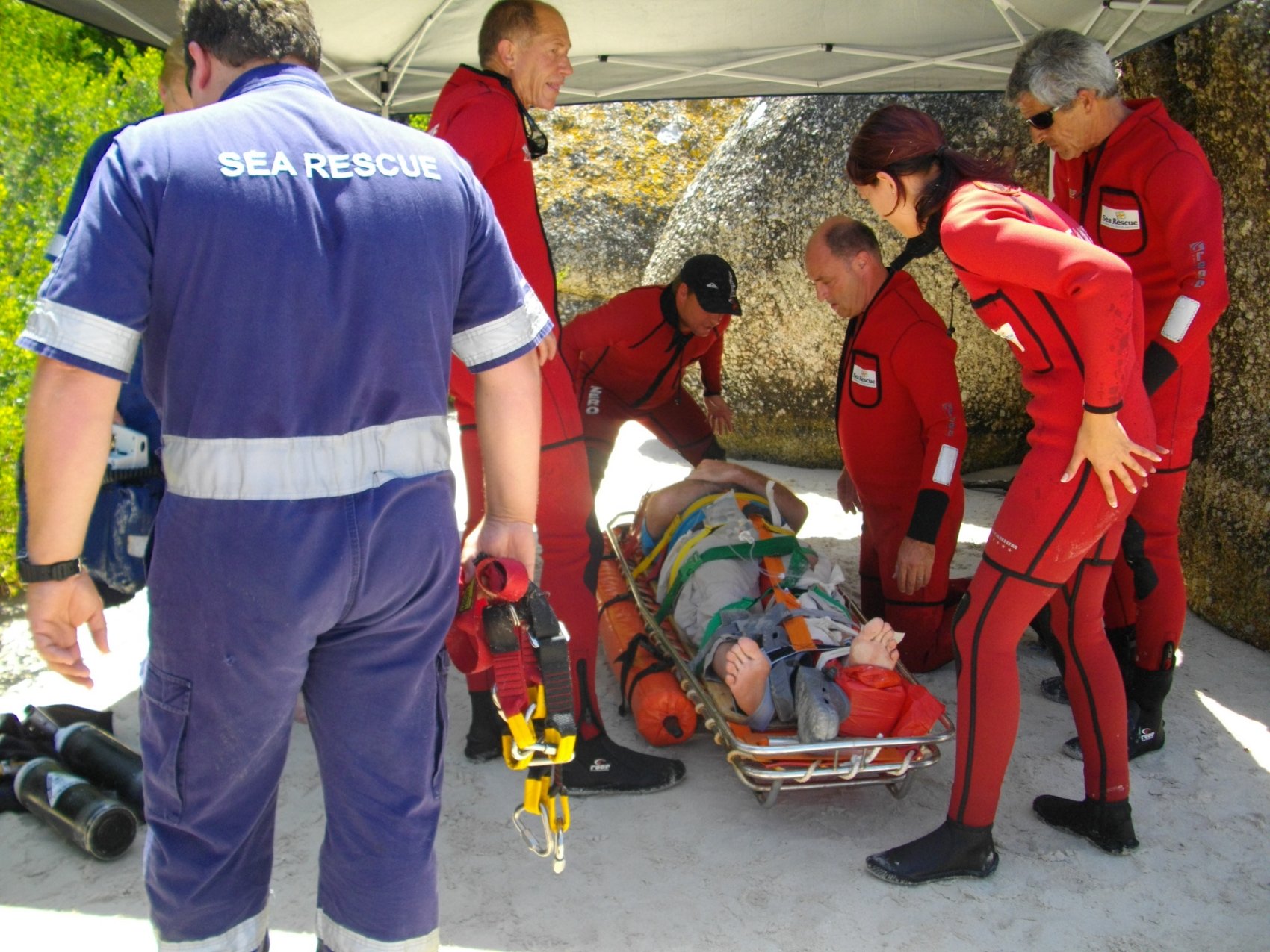 At 10h30 NSRI Melkbosstrand were alerted to respond to Silverstroomstrand where lifeguards had happened upon a 5 year old girl, from Mannenberg, who had allegedly been involved in a near drowning accident at least an hour earlier but whose parents had apparently not sought any help after managing to get the child out of the water.
After the lifeguards noticed that the child was suffering breathing difficulties and on enquiring as to the possible causes they (the lifeguards) summoned the Police, Metro EMS and NSRI Melkbosstrand while lifeguard medics and Police treated the patient for near drowning symptoms and the child has been transported to hospital by Metro EMS in a serious but stable condition.

NSRI Melkbosstrand then treated a 17 year old girl suffering a seizure (suspected to be epilepsy) at Melkbosstrand Beach but she refused further treatment after recovering from the episode.

And at 18h30 NSRI Melkbosstrand responded to Slabbert se Klippe where a rubber-duck capsized with two young men onboard. Both men were in the water when the NSRI sea rescue craft arrived on-scene and they were rescued and their boat has been recovered.

NSRI Melkbosstrand medics also later responded to the Fire Station where a 38 year old woman had been brought to the Fire Station by her family seeking medical help for their family member who had collapsed and was unresponsive.
NSRI medics and Fire and Rescue medics battled to stabilize the patient whose pulse then stopped and CPR was initiated and Metro EMS and the Metro EMS Skymed helicopter arrived on-scene and following an aggressive resuscitation the patients pulse was restored and she has been airlifted to hospital in a critical condition.
It was not clear at the time where the woman is from.

NSRI Hermanus launched their sea rescue craft HUNTERS GOLD RESCUER to respond to Skulphoek where a small fishing boat capsized 700 meters off-shore with 2 men onboard.
One man, 22 year old Jean Swanepoel, was rescued by a passing boat and the skipper, 22 year old Christiaan Groenewald, was rescued off the upturned hull of his boat by NSRI and a tow-line was rigged and their boat and both men were brought to shore.
Both men, who were not injured, are from Brackenfell.