Tuesday, 26 July, 2011: NSRI on stand-by throughout the night for ship run aground at Sheffield Beach.

In a remarkable display of technical rescue flying skill, commendations are made to the pilots and crews of the 3 helicopters involved in today’s rescue operation.
The combined efforts of these pilots, their rescue crews and the salvors averted a potential Maritime disaster today.

All 15 crew of the Phoenix have been airlifted to safety by 3 helicopters – the SA Air Force 15 Squadron Oryx helicopter, the Transnet National Ports Authority helicopter and a Police helicopter. All 15 crew were airlifted off the Phoenix after she ran aground and although the crew were reportedly in no immediate danger they were taken off the vessel for safety.

Six salvage crew from Subtech salvors have been airlifted to the vessel and efforts by Smit Amandla Marine have begun to attempt to salvage the vessel.

NSRI Durban’s sea rescue craft has been released from the scene since all of Phoenix crew are now safely ashore.

NSRI Durban remain on alert to assist if necessary.

The Phoenix, a derelict bulk tanker ran aground at Sheffield Beach on Durban’s North Coast at about 10 am this morning.

At approximately 19h00 on Monday, 25 July, 2011 NSRI Durban volunteers and the SA Air Force 15 Squadron were placed on high alert by the Transnet National Ports Authority for the 164 meter bulk tanker Phoenix that had broken its anchor and was drifting towards Sheffield Beach on Durban’s North Coast.

Phoenix was en-route to Indian scrap yards to be scrapped and is carrying a small skeleton crew. She was under her own motor power passing the South African Coast and put to anchor off Durban’s North Coast to wait out some inclement weather on Monday.

A cold front pushed through during Monday bringing up to 4 meter swells and a 25 to 30 knot wind with rough sea conditions.

Following reports that her anchor chain had failed the Transnet National Ports Authority dispatched the salvage tug Smit Amandla which was standing-by off the Durban coast at the time, to attempt to attach a tow-line and drag the bulk tanker out to deep sea.

Attempts to attach a tow-line in rough seas was not immediately possible last night and Phoenix lay close off-shore of Sheffield Beach.

At the same time NSRI Durban volunteers were placed on alert and the South African Air Force 15 Squadron Oryx helicopter was placed on alert to evacuate the skeleton crew if needed.

This morning, 26 July, 2011, according to the Transnet National Ports Authority, Smit Amandla Marine have requested a team from Subtech salvors to assist to attach a tow-line from Phoenix to Smit Amandla in order that the casualty ship can be towed out to sea.

NSRI Durban will dispatch a deep-sea rescue craft to be on stand-by during the salvage operation.

eThekwini Fire and Rescue services have dispatched a team to stand-by on the beach front and SAMSA (South African Maritime safety authority) are monitoring the situation and directing the salvage operation.
Smit Amandla Marine are the salvage commanders and NSRI’s role in todays operation is simply as a stand-by safety boat while the operation is being carried out. 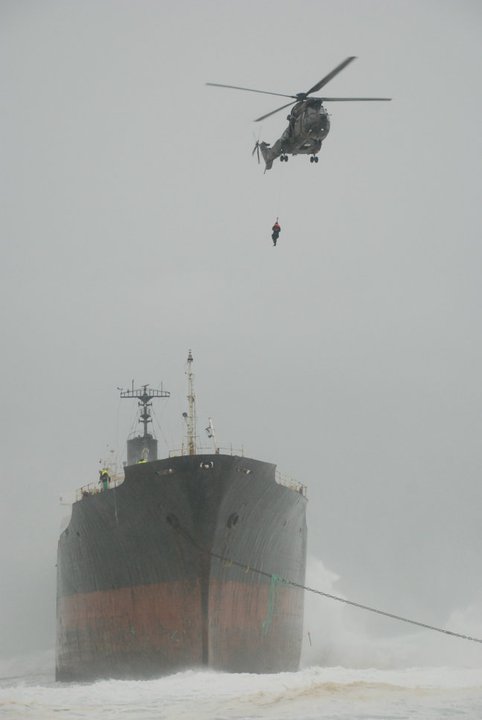