The NSRI and Rotary have enjoyed a long and fruitful friendship through the years. The assistance of Rotary Clubs throughout South Africa, and internationally, has enabled the NSRI to fulfill a number of needs within various rescue bases. One annual project in particular, the Rotary Wine Auction, stands out as having made one of the greatest contributions towards the Institute. This event has traditionally been hosted by the Rotary Clubs of Table Bay and Newlands with the Rotary Club of Knights Pendragon recently coming on board to host the 2010 Parallel Wine Auction in Gauteng.

The Rotary Wine Auction has been raising funds for worthy causes for 15 years, with almost all of the auctions nominating Sea Rescue as a sole beneficiary. The most recent Wine Auctions took place in October 2010 where a new 6.5 metre rescue craft was launched for the NSRI Melkbos Rescue Base.

Past projects funded by Rotary Wine Auction proceeds have included the following:

The Rotary / Sea Rescue relationship, over and above the Rotary Wine Auction, has resulted in the sponsorship of a number  NSRI vessels and vehicles. For one, ‘Spirit of Rotary’ ( a 11.9 metre all – weather rescue craft) was donated to the NSRI Hout Bay base by Rotary District 235. She was built in Cape Town in 1979 and in 1994 she underwent a major refit which streamlined her operational functions. The Bakoven base launched their 5.79 metre rescue craft ‘Spirit of Rotary Table Bay’ in 1997 thanks to Rotary’s assistance, and the Table Bay Rescue Station has had a 4X4 rescue mobile partly sponsored by the Table Bay Rotary Club. A 5.5 metre Rigid Inflatable ‘Spirit of Rotary Blouberg’  was put into service in June 2001. It should also be mentioned that the Saldanha Bay station gained a 8 metre rescue craft ‘Spirit of Rotary II’, but this vessel has since been decommissioned.

To reserve a table at the Auction or for further information, please contact Krista Lazzari on 021-434 4011 or kristal@searescue.org.za 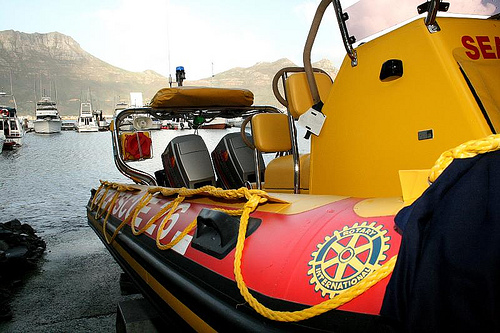