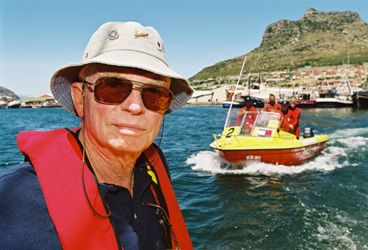 Chris has a remarkable capacity for taking on extra work and helping plan and implement strategies that improve both the operational and administrative side of the organization. His ability to thoroughly research new technologies, and then find the people who could implement the systems, aided Sea Rescue move into the world of digital reports. He was also instrumental in the development of the boat and vehicle tracking system which has significantly increased the safety of our crews at sea.

His precise and fair way of handling situations is respected throughout the institute, and he is well known for going beyond the extra mile.

He was the guiding hand, at board level, behind the formation of the Air Sea Rescue Unit. He is also the final check and proof reader of the magazine, Sea Rescue, and is the voice behind the award citations.

Perhaps the most remarkable thing about Chris is his humility. Despite all the extra time and energy he puts into the Institute, he is happy to operate quietly behind the scenes putting a steady hand on the tiller without wanting recognition for his achievements.

Through his efforts Chris has made vast improvements in the safety of crews at sea as well as operational and administrative structures.

We are truly indebted to Chris Hudson.