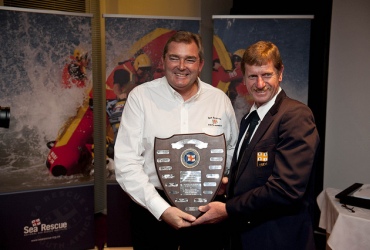 Team spirit and a desire to serve were the themes at the National Sea Rescue Institute AGM, held at the Waterfront on Thursday, 26 August.  Awards for going beyond the call of duty were handed to sea rescue volunteers from NSRI Agulhas and NSRI Melkbosstrand as well as to a member of the public, also from Melkbosstrand.

Discovery Holdings Limited were presented with The Alric Simpson Floating Trophy, which is awarded annually to a person who, or an organization which, has rendered distinguished service to Sea Rescue.

The Marmion Marsh Memorial trophy was presented to Chris Hudson for his tireless service to the cause of sea rescue.

We have just heard that the International Maritime Organisation has awarded Certificates of Commendation in recognition of meritorious services rended to our St18 (Melkbosstrand) coxswain Myck Jubber, crewman Kobus Meyer and crewman Kim Germishuys who went to the assistance of the Seli 1 off Dolphin Beach, Table Bay late at night on 07 September 2009.