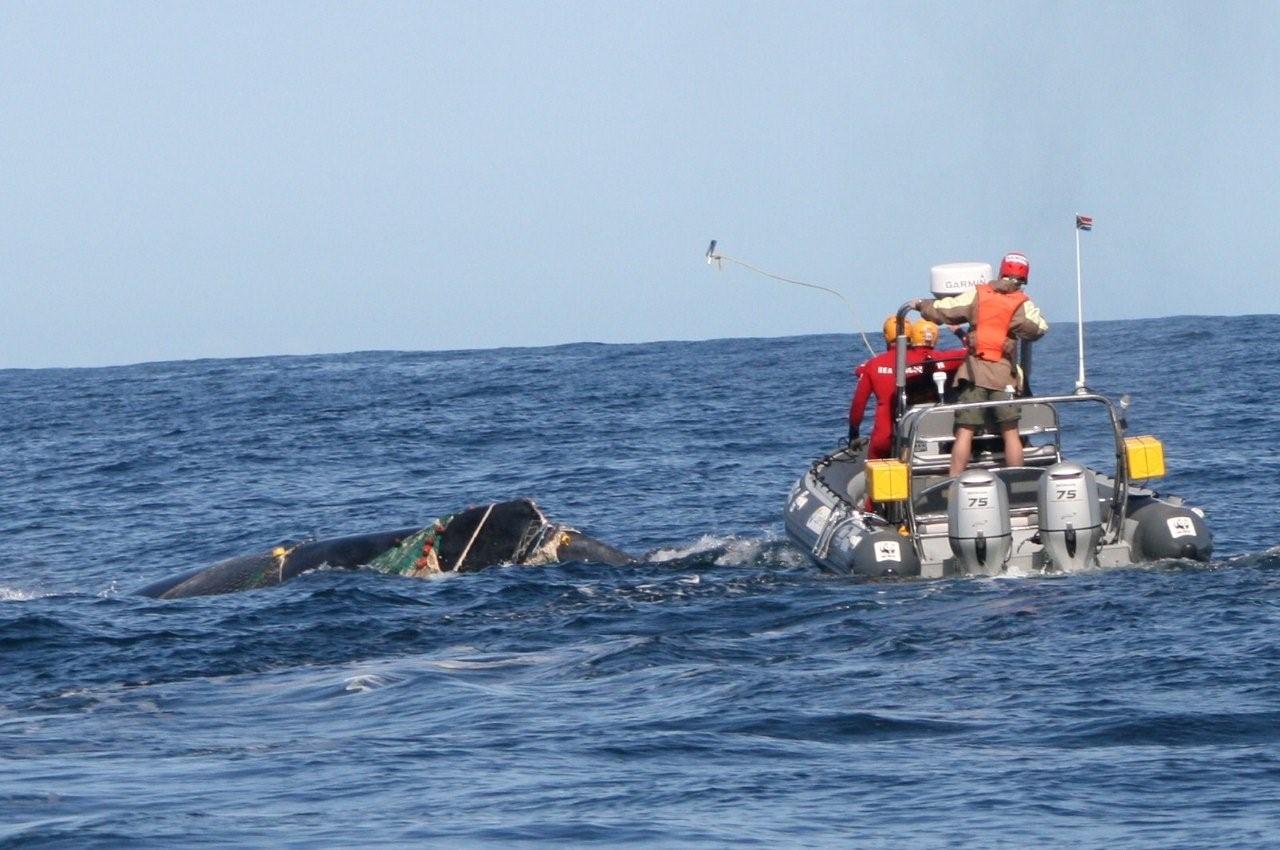 On Friday, 27 August, 2010 at 11h35  members of the SA Whale Disentanglement Network (SAWDN) were activated following eye-witness reports of a cow and her calf, both Hump Back whales, in the vicinity of close in-shore at Robberg, near Plettenberg Bay, with the adult 13 metre cow reported to have netting entangled around her body, tail and dorsal fin.

Members of SAWDN, who were in the vicinity of the incident at the time, responded to the scene and confirmed that approximately 20 square feet of netting was entangled around the adult whale (accompanied by her, approximately, 1 month old calf).

Additional members of SWADN, carrying specialised disentangling equipment, responded to the scene aboard the local vessel Damara II (Damara II  belongs to Ocean Blue Adventures who volunteered their craft to the SAWDN members for today’s operation).

Attempts were made by SAWDN members to disentangle the adult cow from the nets but these efforts were made more difficult after the cow appeared to be skittish and agitated, which is suspected to be due to her paternal instincts to protect her calf.

At one point the two whales were swimming along at about 4 to 5 knots in an Easterly direction and both of the SAWDN vessels (being used) were forced to try to keep up with the whales and to “keep pace” with the affected adult whale while the SAWDN volunteers, using specialised disentangling equipment, tried to free the netting from the torso of the whale.

While some of the netting has been freed from the whale this operation eventually became too dangerous for our members and at around 15h00 the operation was suspended in the vicinity off-shore of Natures Valley.

At the time of suspending the operation the two whales had moved quite far East up the coast and it appears they are continuing to move in that direction.

SAWDN members in St Francis Bay and in Port Elizabeth have been placed on high alert and boaters in the area are being asked to keep a watch and to report any sighting of the whale to the Sea Rescue Emergency Phone Numbers.

THE SA WHALE DISENTANGLEMENT NETWORK IS A SPECIALISED NETWORK OF VOLUNTEERS SET-UP IN 2006 TO DEAL WITH THESE TYPES OF SITUATIONS AND COMPRISES VOLUNTEERS – FROM NSRI, THE DEPARTMENT OF ENVIRONMENTAL AFFAIRS – OCEANS AND COAST, SA NATIONAL PARKS, CAPE NATURE, THE SA POLICE SERVICES, VARIOUS AQUARIUMS from around South Africa, THE NATAL SHARKS BOARD, BAYWORLD, VARIOUS OTHER ORGANISATIONS AND VOLUNTEERS, with the support of the Dolphin Action and Protection Group (DAPG).  SAWDN COVERS THE ENTIRE SA COASTLINE. 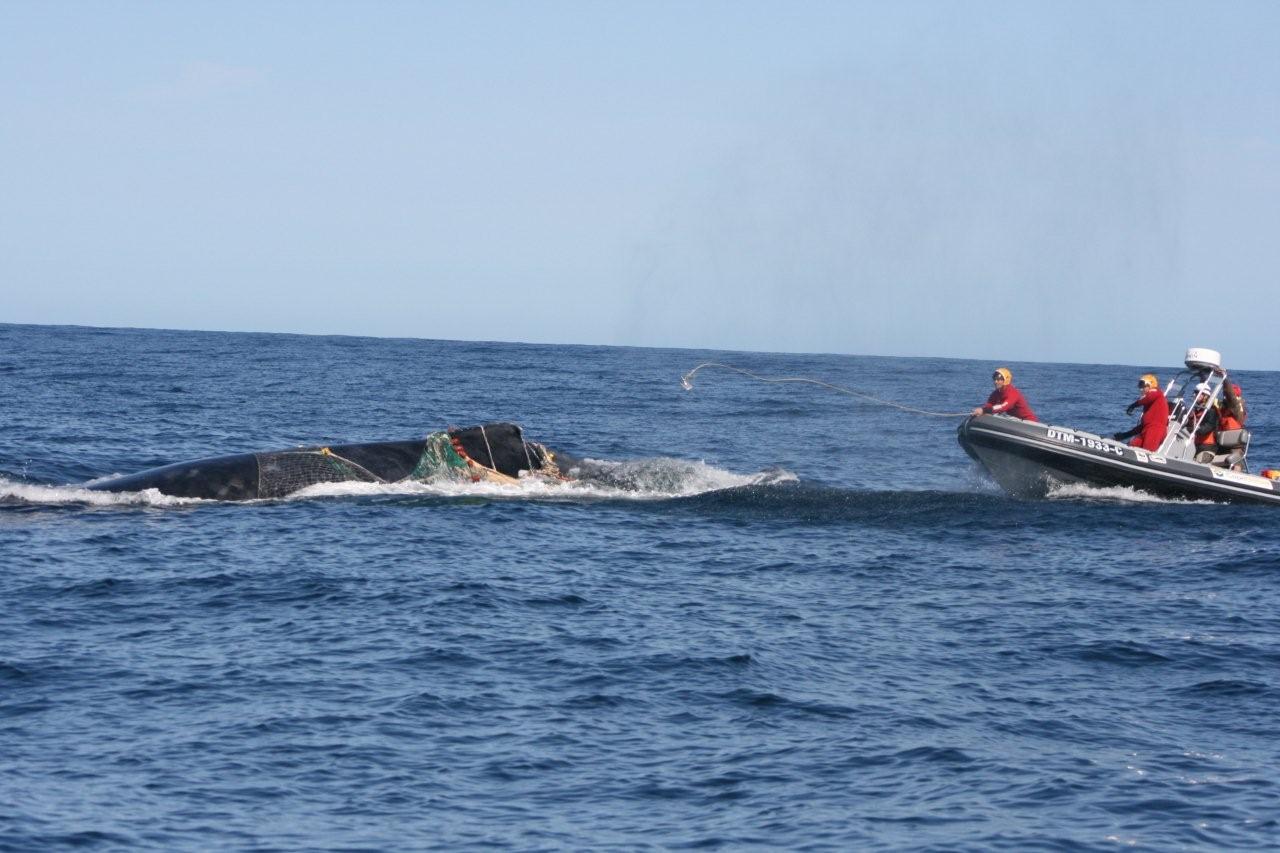 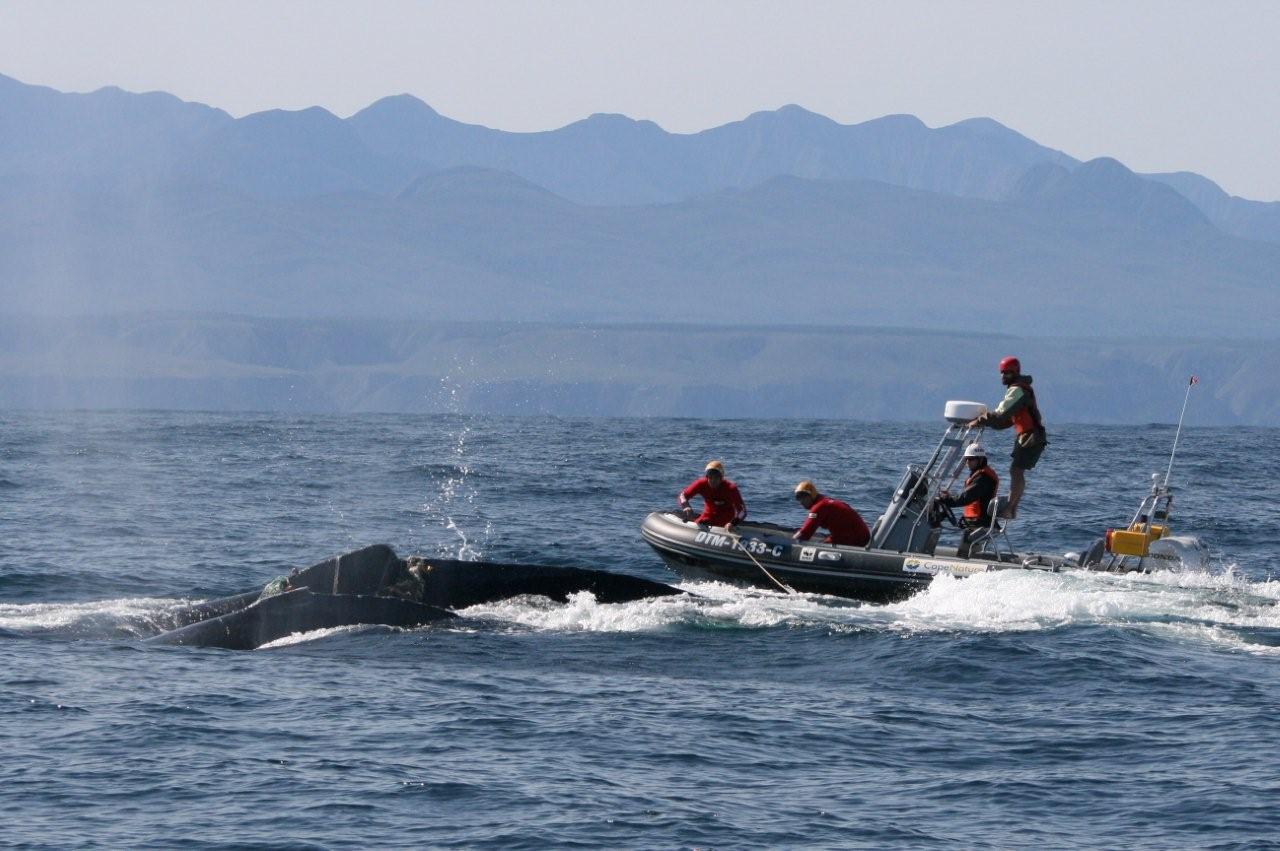 We are urging boaters and the public not to try to attempt to disentangle the whales themselves as an operation of this nature is extremely dangerous due to the size and the unpredictable behaviour of these animals. The volunteers of the SA Whale Disentanglement Network are trained in these types of rescue operations and use specialised equipment.

It is suspected that the fishing nets around this whale may be Tuna Purse Seine Nets not normally found in SA waters and we suspect that she may have gotten fouled in these nets further North beyond SA’s borders. (This is our suspicion and unless we recover the nets we cannot confirm this!).

The adult whale presently does not appear to be debilitated by the gear (nets). The effect of the drag of the net, on its migration South, is presently not known.