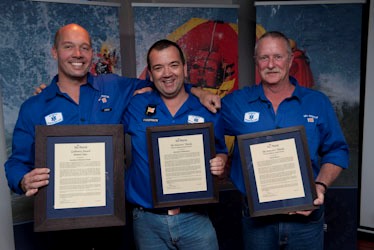 Awarded to Jacobus ( Jaco)  Johannes Louw of Station 30, Agulhas, for his gallantry & seamanship as coxswain of the 8.5m rigid inflatable rescue boat Vodacom Rescuer VII, callsign Rescue 30, on the night of 14/15 June 2010, when the 12m ketch Redfin, in trouble 2.5 nautical miles off Quoin Point, 23 nm away around the other side of Cape Agulhas from Struisbaai where Station 30 is based, sent out a Mayday distress call.  Redfin had lost her rudder and the drogue deployed to slow her drift.  An on-shore 25 knot south easterly wind, with 3 metre swells, were driving her landwards.

Rescue 30 launched at 01h04 on 15 June with Jaco as cox’n in charge and Reinhard Geldenhuys, also a qualified cox’n, & Darryl Moon as his crew.  On the Struisbaai side of Cape Agulhas the weather was particularly foul.  A Force 7 – 8  south westerly gale was blowing, which created a 7 metre swell sea state.  There was no moon.  The coast between Struisbaai and Quoin Point is uninhabited, except around Cape Agulhas itself.  If the rescue crew had got into trouble themselves there was no help nearby.  In these daunting conditions, navigating by radar and the boat’s global positioning system, it took the Rescue 30 crew in their open boat two hours to reach the casualty yacht.

On scene the sea conditions were rather better as Redfin was partially in the lee of the land.  Jaco Louw approached the casualty at 45° in her lee and on her port quarter.  In three passes taking 20 minutes in all, the 4 crew of the yacht, two women & two men, were taken off without too much difficulty onto the bow of the rescue boat. The main problem was that the yacht’s sails were still hoisted and she was rolling violently. Illumination was provided initially by white illumination flares and during the transfer by R30’s two spotlights, which gave a good light.

At this time the skipper of Redfin refused to leave his vessel, despite repeated pleas. Being unable to persuade him to do so, Jaco began the return journey to Struisbaai at 03h20.  Fortunately after further urging from the station commander of Station 30, the skipper agreed to be evacuated.  R30 turned around, returned to the casualty and took off the skipper at 03h43.

Jaco Louw’s behaviour that night was exemplary and in the very best traditions of the National Sea Rescue Institute.  Without hesitation he took his open boat out into fearful conditions to accomplish the NSRI’s mission and saved five lives at sea, and by example encouraged his crew to do their very best in assisting him in the task.