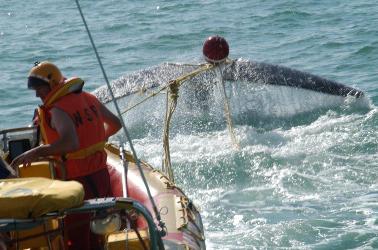 “The whale was spotted swimming between Gordon’s Bay and Kogel Bay and numerous sightings had been reported by eye-witnesses.

“The whale had first been spotted the night before (Friday 13/08) by private boats in False Bay and efforts, by the City of Cape Town’s Department of Environmental Affairs – Oceans and Coast, to find the whale had been called off at last light and on Saturday morning the Department of Environmental Affairs Coastal Patrol fixed wing aircraft, which happened to be in the air and in the area on normal patrol operations at the time, was asked to try to spot the whale but no sightings were made and a request was made on Maritime vhf radio frequencies for private vessels in the area to keep a lookout for the whale.

“At 11h09 (Saturday 14/08) the private craft Southern Right happened to spot the whale and they called the NSRI.

“Two NSRI sea rescue craft were dispatched by sea rescue Gordon’s Bay, the Sanlam Rescuer and the Douglas Murray, and the whale was found off Steenbras Point where specialised disentanglement equipment was used by SAWDU volunteers to free the whale from it’s entanglement.

“Once the whale had been successfully freed the young whale swam off appearing to be in a healthy state.

THE SA WHALE DISENTANGLEMENT UNIT IS A SPECIALISED UNIT THAT SET UP A NETWORK OF VOLUNTEERS IN 2006 TO DEAL WITH THESE TYPES OF SITUATIONS AND COMPRISES VOLUNTEERS – FROM NSRI, THE DEPARTMENT OF ENVIRONMENTAL AFFAIRS – OCEANS AND COAST, SA NATIONAL PARKS, CAPE NATURE, THE SA POLICE SERVICES, VARIOUS AQUARIUMS from around South Africa, THE NATAL SHARKS BOARD, VARIOUS OTHER ORGANISATIONS AND VOLUNTEERS, with the support of the Dolphin Action and Protection Group (DAPG).  SAWDU COVERS THE ENTIRE SA COASTLINE.