On Wednesday, 14 May 1986, a strong 20 knot North Westerly wind blew up over the Cape Peninsula, gusting up to 50 knots at times, accompanied by rain squalls. Late that afternoon the 32’ yacht “Gulliver” en route to Cape Town with four persons on board, rounded Cape Point and beat northwards. Progress was slow and by 23h00 “Gulliver” was only abeam Slangkop Light, 6 n.m. south of Hout Bay.

Then disaster struck. A particularly strong gust dismasted “Gulliver” and she began to drift towards the shore. The crew fired a red flare which was seen, and Cape Town Port Control alerted, who in turn phoned Ken Brady, station commander of NSRI Station 8, Hout Bay. He immediately ordered a full crew callout and at 23h38 the station was opened. Ken phoned Richard van Zyl, the lighthouse keeper of Slangkop Light, for more information and learnt that the casualty was now only 1 n.m. off shore, drifting in 5 metre swells. In that area, the sea is very shallow and covered in kelp beds. The prevailing westerly swells cause the sea to pile up and crash down in the form of huge breakers. The lighthouse keeper’s view was that the “Gulliver” crew should be taken off by helicopter but being night time that option was not feasible.

To face these conditions and attempt to rescue the crew of the stricken yacht the 8 m rescue boat “Spirit of Mobil” was launched at 23h55. This Renata Levi class of vessel was powered by two 165 h,p., inboard/outboard petrol engines and had a small cabin. She also had an external helming station, used whenever possible because of the improved visibility it provided the cox’n in all but the worst weather conditions. A very manoeuvrable and seaworthy sea rescue vessel, the “Spirit of Mobil” was well-liked and trusted by her crews but she was operating on the outer edge of her capabilities that night.

Her crew on the 14th of May was Peter Braham (Cox’n), an experienced NSRI seaman, David Brookes (Deputy cox’n) an ex-Royal Navy deck officer with over 15 years of sea time behind him, and crewmen Ian Ruthven and Luke Froon; all volunteers who lived in the Hout Bay/Llandudno area. It was David’s last duty, as pressure of business was making it impossible for him to devote the time necessary to be an effective sea-going NSRI crew member. Radio communications and base control were provided by George Bing.

To act as a back-up radio link for “Spirit of Mobil” and as NSRI on-scene shore link, Ken Brady and his deputy, Peter le Cordeur, motored round to Slangkop Light; a 30 minute journey. They established and maintained contact with “Gulliver” almost until the last moment of the rescue.

Meanwhile, “Spirit of Mobil” was battling out of Hout Bay and across Chapman’s Bay on its way to the casualty. The wind had by now picked up to a steady 35-40 knot NW gale. Acting against the prevailing South Westerly swell produced deep, steep seas. There was no moon. The rescue boat could only make 5 knots in the dreadful weather conditions.

At 00h36 on 15th May “Gulliver” reported that she had put out two anchors but they were not holding. Her liferaft was punctured. A radar plot from Slangkop Light showed the casualty 1½ n.m. off the lighthouse, entering the heavy kelp area known locally as “The Jungle”. This location made any attempt by the rescue boat to approach the casualty particularly hazardous, as there was only one safe passage through the kelp beds.

At 00h44 an almost unique occurrence took place: at the NSRI’s request Slangkop Light was stopped rotating and shone its beam steadily out over the area in which the casualty yacht was wallowing. 30 minutes later “Spirit of Mobil” arrived on scene. By now “Gulliver” was almost ashore but in relatively calmer waters between the kelp beds and the shoreline.

Displaying outstanding seamanship, Cox’n Braham threaded his way through the heaving, confused waters of “The Jungle” with just the illumination provided by Slangkop Light and the one searchlight on the rescue boat to help him. As “Spirit of Mobil” drew near the casualty, Peter Braham realised that getting close to the stricken yacht would be impossible, as it was surrounded by ropes and rigging. The survivors were told to abandon ship and board their liferaft, even though it would not fully inflate. Peter kept his bow to sea and tried to veer down on the “Gulliver” to reduce the distance between the vessels as the survivors paddled frantically towards the rescue boat. The drag of the semi-inflated liferaft and the sea conditions almost defeated the exhausted quartet and only a well-aimed – and well-caught – rope from “Spirit of Mobil” enabled the rescue boat crew to haul the liferaft alongside and four relieved survivors clambered and were dragged aboard.

However if the “Gulliver”’s crew thought their troubles were now over, they were in for a rude awakening. With the survivors aboard and seated in the well-deck, Peter Braham began to take “Spirit of Mobil” seaward. With the sea spray all around reflecting the limited light there was from the rescue boat’s searchlight, he was steering virtually blind. To see what little he could, Peter was helming from the upper steering position, with the top half of his body poking out of a hatch on the forward edge of the wheelhouse roof.

Suddenly out of the darkness a huge breaker loomed. Peter immediately went full ahead on both engines. The little 8 metre rescue boat seemed to climb up the wall of water forever and then came the crash downwards off the top of the monster wave.

The impact threw everyone to the deck and both engines stalled. Peter fell through the roof hatch onto the wheelhouse deck and suffered mild concussion and broke some ribs.

Now the rescuers were themselves at the mercy of the seas. As the bow swung and the rescue boat began to heel over, with great presence of mind David Brookes turned off all electrical services and dived for the Vetus battery switches, putting them into “Starting” mode to ensure maximum electrical power to the engine starter motors. Despite his dizzy state, Peter Braham pressed the starter buttons one after the other and one engine fired. However, in his confused condition, Peter did not realise that with just the one engine running “Spirit of Mobil” was turning in a circle, and was now broadside to the sea. Ian Ruthven, who had himself suffered a head injury and damaged his hand when the rescue boat fell of the breaker, grabbed the wheel and straightened up the boat. Then the second engine fired and full control was regained.

Peter resumed the task of extricating his vessel from the clinging tentacles of “The Jungle” kelp beds. He was now sailing directly into the NW gale and broadside to the SW swells. At 01.35 a.m. “Spirit of Mobil” was again swamped and again the motors stalled. Again David leapt for the Vetus switches and again the motors responded immediately Peter actuated the starter buttons. The “Gulliver” survivors probably feared they had exchanged the proverbial frying pan for the fire.

Fortunately that was the last of the really dangerous excitement for the night. The passage back to Hout Bay took another uncomfortable hour but Peter Braham brought his rescue boat and four very grateful survivors, not to mention three exhausted and relieved NSRI crewmen, home safely at 02.35 a.m.

For his efforts that day Peter Braham was awarded the NSRI Meritorious Service award, the second highest form of recognition for gallantry at sea. 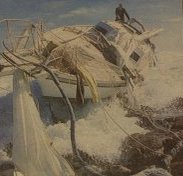 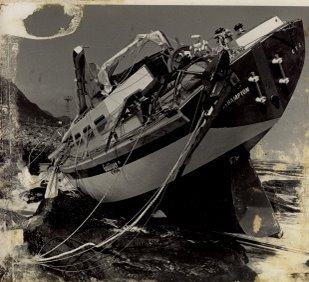